Before nearly 2000 spectators the above teams met in a friendly at East Dock Street. Interest centred in the game from the fact that the teams meet in the final for the Forfarshire Cup three weeks hence.

Both sides were at their strongest, with the exception that Martin took Keillor's place on the left for the Dundee team. Mr Hendry, of the Glasgow Northern, had the contestants under his care, and fifteen minutes late the following players took the field:

Losing the choice, Dundas started towards the north goal with a bright sun behind. Almost immediately a foul off Brennan was well saved, and the Harp rushing south Ferrier had to concede a corner, but nothing resulted, and play was now more open.

Both teams put in some splendid work. A grand save by Malone brought forth loud cheers. Dundee still pressed, and a foul off Murray in the goal looked dangerous, but Dundas shot passed. After ten minutes play Martin short an easy goal for Dundee.

Resuming, the greens got south. A corner off Ferrier, although well placed, proved fruitless, and Dundee were soon at the other end, and Martin shot splendidly. Malone saved, but McInroy rushed in and scored a second goal for Dundee.

The Harp were now having plenty to do, and after some midfield play and pressure on the part of Dundee, Gilligan with a long drop, which Malone misjudged, registered a third point.

The greens subsequently came away with great dash, McCallum being prominent, but they were ultimately forced back, and Thomson, after a second attempt, landed a fourth goal for Dundee.

The interval was now near, and just before the first portion ended, Campbell had the misfortune to dislocate his arm, and Dundee had to finish with ten men.

In the second half, the East Dock Street team started with vigour, and from a foul Fagan put the ball through untouched. Desultory play followed.

A corner and a foul fell to Dundee, but Barrett saved in good style, McFarlane, on the Harp's right, muddled an easy chance, and a foul off McCallum let the blues south, where, however, they were checked.

The Harp's forwards came away in good style, but Craig, however, saved splendidly, and an exciting tussle took place at the south goal.

A foul off Ferrier at the goalmouth was not improved upon.

Some good passing was shown by both teams, and Dundee, although playing with ten men, fully held their own. At one stage from a splendid single-handed effort, Gilligan just missed

Just on the call of time three corners fell to the Harp, but these were not improved upon, and Mr Hendry sounded the retiral, the scores at the finish being - Dundee, 4; Harp, 0. 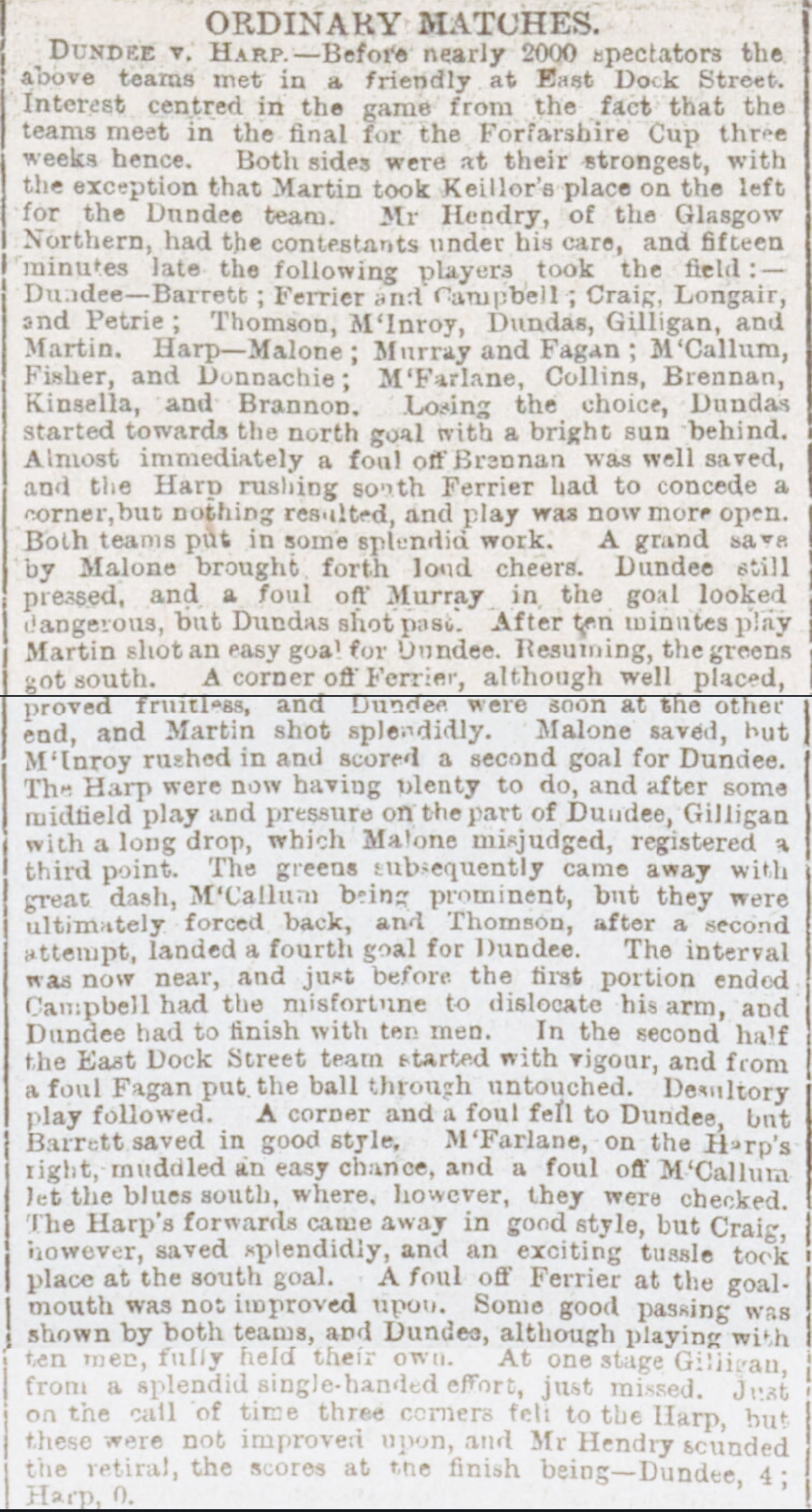