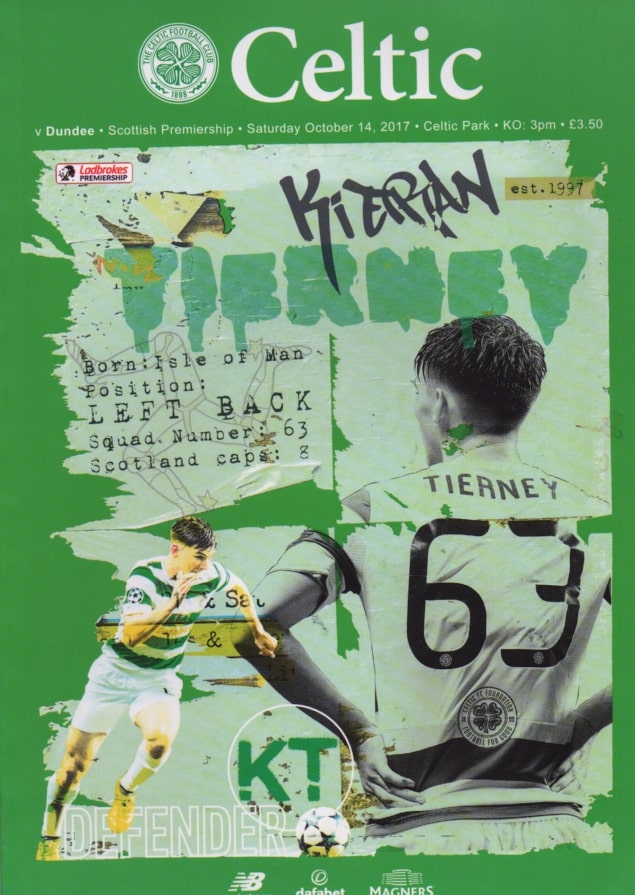 The nervous whistling for the final whistle from Celtic supporters told the story of today’s 1-0 defeat for the Dee at Parkhead. Olivier Ntcham scored the only goal after an hour but it was Dorus De Vries who then won the match for Celtic with three outstanding saves to break Dark Blue hearts.

Josh Meekings came in for his debut in a three man central defence and A-Jay Leitch-Smith returned in attack. Kerr Waddell and Sofien Moussa moved from the starting line-up to the bench. Celtic made no fewer than seven changes, the most eye catching being the absence of Scotland goalkeeper Craig Gordon as Dorus De Vries started his first game in over a year.

Dundee withstood an early whirlwind of Celtic attacks as the champions poured forward hunting an early goal. Scott Bain had to push a cross-shot from Scott Sinclair wide for a corner and a minute later Darren McGregor curled a shot narrowly wide of the far post. Leigh Griffiths headed wide from Cristian Gamboa’s cross at the end of a fast attack down the right. Olivier Ntcham carelessly blasted his shot well over the bar when a corner broke to him. A Griffiths free kick from 35 yards wasn’t far off target. The Dark Blues defence was standing up well to some dangerous attacking, but needed Josh Meekings timely intervention to tidy up a mess when they lost the ball on the edge of the penalty area while playing their way out from the back.

This was all in an opening 20 minutes that was worrying viewing for Dark Blues fans. From that point onwards Dundee started to compete pleasingly in midfield. Although Celtic’s three man attack always carried a serious threat on the ball the service they received became increasingly erratic as Dundee harried and chased, pressing the error prone home midfield high up the pitch.

Dundee’s midfield was more composed on the ball than their counterparts, with Glen Kamara in particular looking entirely comfortable in this company. Although the Dark Blues were having the edge in midfield there was a lack of clear chances for Dundee in the first half.

After a long spell in which Celtic had been kept quiet it took a great reaction save from Bain to stop McGregor converting a cut-back from Patrick Roberts, by far the most dangerous Celt throughout the game.

The Dark Blues ended the first half pushing unsuccessfully for the opening goal and that was how the second half opened. Celtic, however, burst into life and Bain pulled off two good saves in quick succession. First he stretched to tip away Roberts’ low shot at the end of a mazy run. Within a minute he blocked Griffihs’ effort after uncharacteristic hesitancy allowed the former Dee to run clear.

The game’s only goal soon followed, and from a surprising source. Dundee tried to break quickly out of defence, but lost the ball, allowing Olivier NTCHAM to try a snapshot from 22 yards. The ball’s horrible swerve in mid-air caught out Bain, allowing one of the game’s less effective players to stake a claim for the headlines. However, it was his teammate Dorus De Vries who then caught the eye with three saves that cost the Dee at least a point.

After a brief spell in which the goal seemed to have sparked Celtic into life Dundee’s midfield got to grips with the game again. De Vries’s first eye catching save left Paul McGowan holding his head after the Dutch keeper beat away a fierce 10 yard volley when Celtic couldn’t clear a free kick. In the follow up the Dark Blues had a credible shout for a penalty when Jack Hendry won a high ball, only to be wiped out by Gamboa’s attempted header catching him in the face. Hendry had been having an impressive match, and it was disappointing to see him leave the pitch to have his face patched up. Jesse Curran came on to play right wing back and Mark O’Hara shifted to the right central defence position.

In spite of the change Dundee’s performance level didn’t drop. Sofien Moussa was now involved, having replaced A-Jay Leitch-Smith. With the Dark Blues chasing an equaliser Celtic had more space to attack, but rarely put any fluent moves together unless they got the almost unstoppable Roberts into the game. Scott Sinclair wasn’t nearly as dangerous as he had been in the recent League Cup game at Dens, but one good run to the byline created a scramble that the Dee were happy to escape.

Dundee then raced up the park and came agonisingly close to an equaliser. Roarie Deacon managed to force his way through the middle, holding off Dedryck Boyata, who came very close to bringing him down inside the penalty area. Finally shrugging off Boyata, Deacon was clear only for De Vries to make a marvellous save, touching the ball over the bar.

Faissal El Bakhatoui came on for the last few minutes, and almost grabbed a late and deserved equaliser. He connected well with a 15 yard volley, but De Vries responded superbly and the frustrated Dark Blues had to leave Parkhead without a point.

It’s traditional for clubs visiting Parkhead to sit deep and hoof the ball anywhere in the hope they might hang on for a point. Dundee scorned that approach today and came to play Celtic at football, going toe to toe with the champions. It didn’t pay off in terms of points, but the Dark Blues’ approach and performance earned the respect of the Celtic management and the neutral observers. The calls from the home support for Celtic to take the ball into the corners in injury time, and the urgent whistling for the final whistle all tell a compelling story.

The Dundee players can be proud of themselves today. To a man they stood up to the champions. This was a game that Celtic were very relieved to win, a victory that was very much in doubt for all 94 minutes. If Dundee can reach this level of performance consistently there is only one way that the Dee should be looking, and that is at the top half of the table.