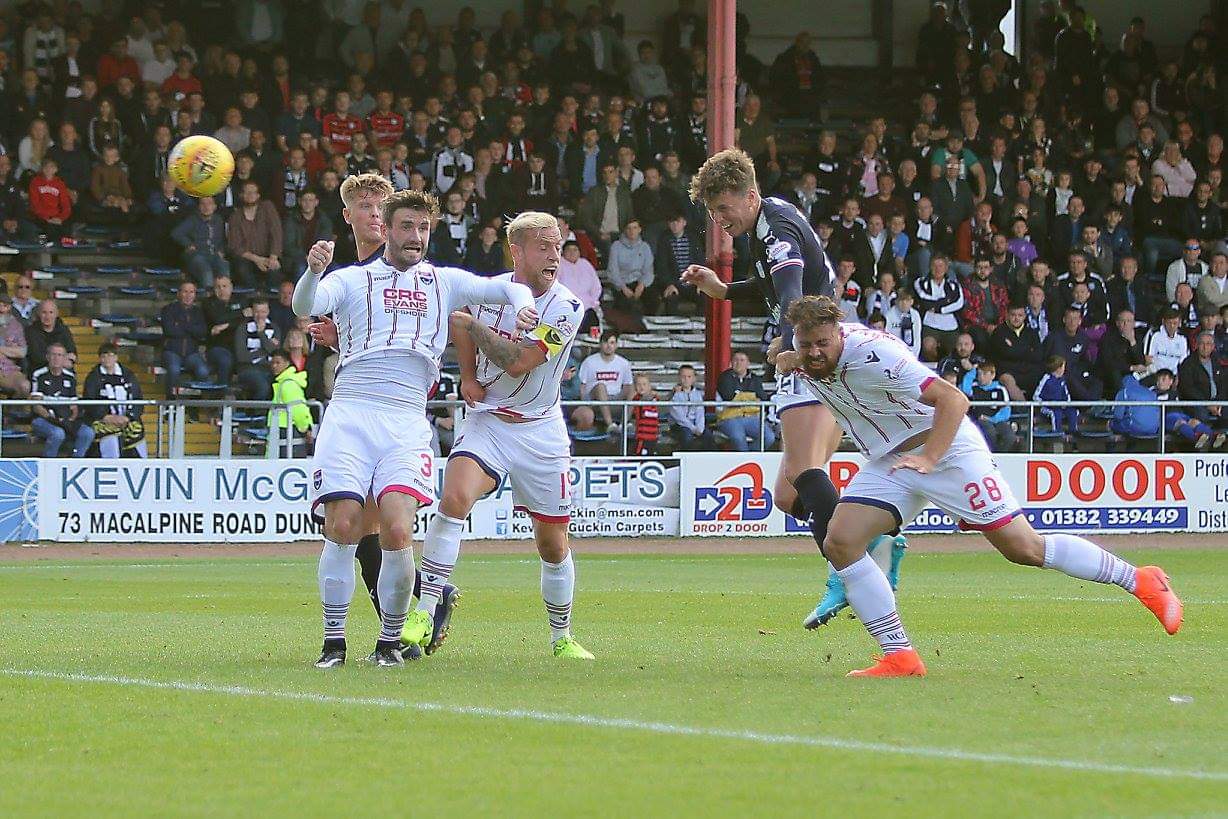 The Dee went down to a 2-1 defeat to Ross County at Dens Park in the opening game of the Premiership season. Jamie Lindsay put the Staggies ahead late in the first half. After Christopher Routis added a second on 60 minutes County sat back to defend in depth. Substitute Jack Hendry pulled a late goal back but the visitors clung on in injury time to take the points.

Dundee’s only change following Sunday’s derby was Randy Wolters starting instead of Paul McGowan. The Staggies made two changes to the team that drew with Arbroath in their last Betfred Cup match. Christopher Routis and Jamie Lindsay came in for Jim O’Brien and Craig Curran.

The Dee came close to scoring twice in the first two minutes. Roarie Deacon sent Cammy Kerr down the right and Scott Allan’s goalbound shot from the cross was blocked. Staggies keeper Scott Fox then saved superbly from Mark O’Hara’s volley from Sofien Moussa’s header into his path.

After surviving that opening storm County settled down, keeping possession more effectively than the Dark Blues who were keen to move the ball forward quickly, often too quickly.

Midway through the first half the Staggies went close when the Dee failed to clear a corner. Michael Gardyne flashed a low ball across goal and the lunging Jason Naismith, beyond the far post, could only turn the ball out of play.

Scott Bain had to save a low drive by Alex Schalk that flew through a crowd of players following a good run down the right by Marcus Fraser, but after 37 minutes County took the lead. A free kick was headed down by Andrew Davies and Jamie LINDSAY made a perfect connection to send a low shot inside Bain’s right hand post from 20 yards.

The Dark Blues pressed hard for an equaliser in the last few minutes of the half. Fox turned Deacon’s 18 yard shot round the post for a corner. When it came over O’Hara headed back across goal for Kevin Holt, whose header was tipped away by Fox at full stretch.

However, County could have nicked a second right at the end of the half but Tim Chow miskicked in front of goal after Alex Schalk had knocked the ball down.

At the start of the second half Jack Hendry came on to replace Kerr Waddell, who had a slight injury and was taken off as a precaution. The Dark Blues were forced to make a second substitution almost immediately. Sofien Moussa went down after a Dee corner and had to leave the pitch after lengthy treatment. Faissal El Bakhtaoui came on as a straight replacement, but the change resulted in the Dark Blues losing a focal point to their attacks. El Bakhtaoui kept dropping off to join the supporting play.

There were sporadic, promising moves from the Dee, with the occasional penatrating pass or good run, but there was nothing that amounted to a serious threat to County’s goal.

Just before the hour Randy Wolters sent over a deep cross and Fox saved well from Deacon’s cross shot, with County scrambling the ball clear. The visitors then went up the field to win a corner from which they scored the goal that put the match beyond the Dee. ROUTIS was left unmarked at the far post to score with a simple header.

With a two goal lead the Staggies tried to choke the game to death. They sat back, defending in depth, running the clock down to the frustration of the home support. Paul McGowan came on for Randy Wolters, playing behind El Bakhtaoui with Scott Allan moving to the left wing. The Dark Blues had been too slow and laboured in their attacks, always giving County plenty of time to regroup and cover. The change did inject some impetus, but still Dundee struggled to get through County’s packed defence.

Finally, after 85 minutes the Dark Blues pulled a goal back. Allan’s corner from the right was headed powerfully into the net from six yards by Jack HENDRY. County barely crossed the half way line after that, frequently allowing Dundee to bring the ball within 30 yards of goal before meeting a challenge. Darren O’Dea and Kevin Holt pushing forward both sent fierce drives just over the bar. Hendry was now playing as a centre forward. His height and physical presence gave County some nervous moments at the back. However, the visitors hung on through injury time, surprisingly brief at four minutes after Sofien Moussa’s injury and some painfully frustrating time-wasting.

County deserved the win for an extremely professional performance, that was largely devoid of mistakes or indeed thrills. Dundee simply couldn’t sustain any drive or impetus to stretch County’s defence. There were very few occasions when the Dark Blues were able to do anything that could surprise County, who always had a player on hand to deal with any potential danger. Last Sunday the Dark Blues were let down by poor final balls from very good positions. Today there were far too few occasions when they were able to get that close to a goal in open play.