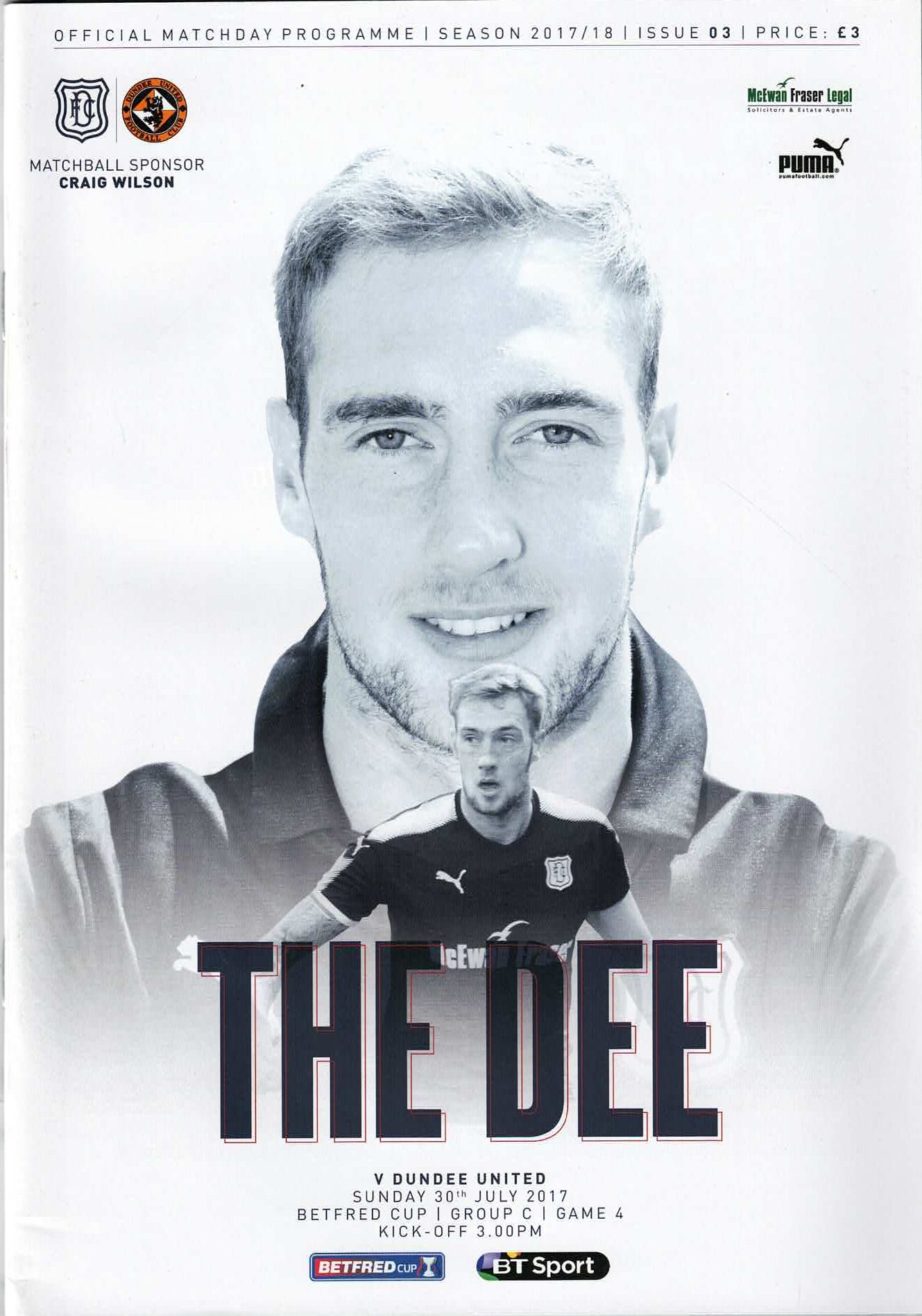 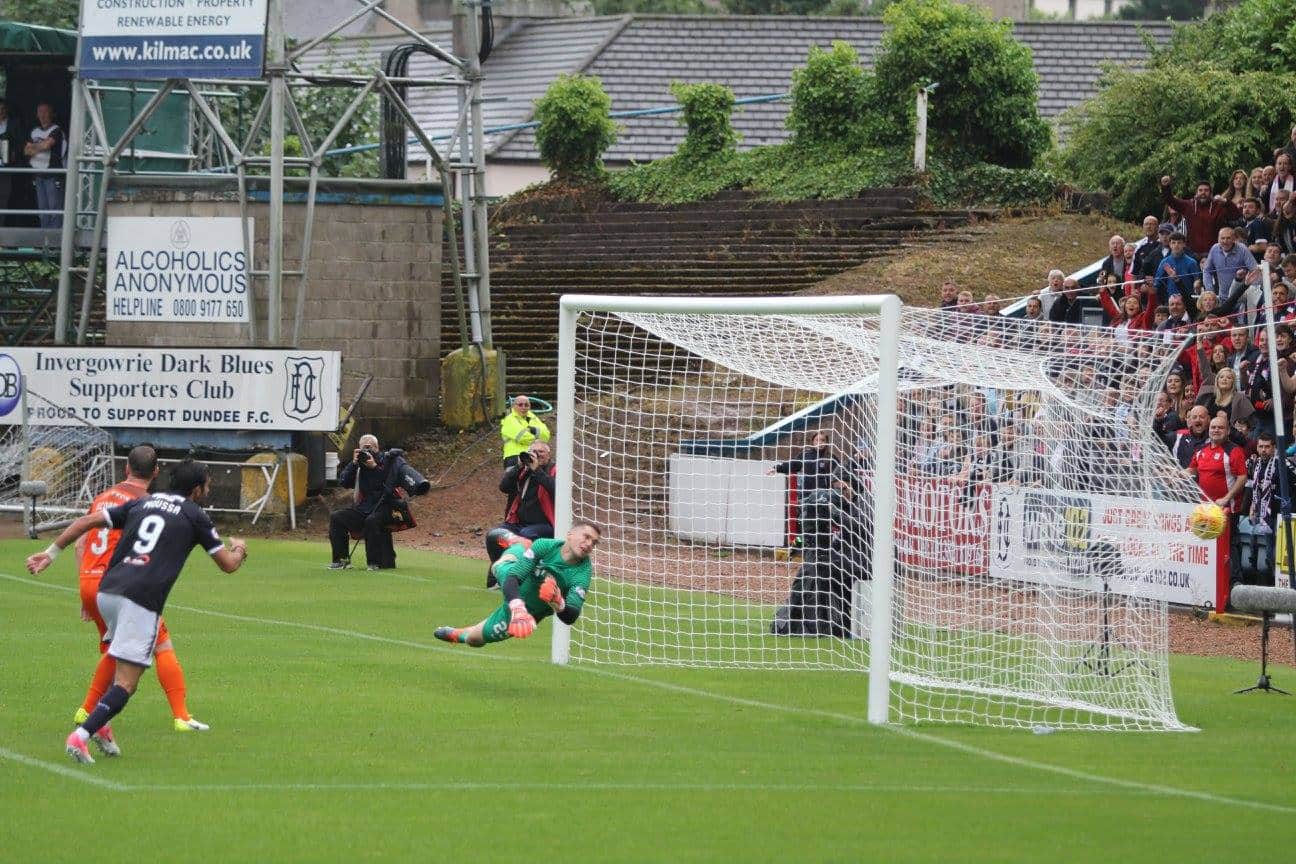 Wasteful Dundee passed up the chance to top Betfred Cup group C, drawing 1-1 at Dens Park against Dundee United. Paul McMullan put United ahead late in the first half and Mark O’Hara pulled the Dee level just before the hour. After Dundee had dominated the 90 minutes United won the penalty shoot-out 4-3 to earn the extra point that allowed them to win the group and take a seeded place in the next round.

The Dark Blues were unchanged from the team that beat Cowdenbeath on Wednesday. United made two changes. Mark Durnan and Scott Allardice came in for Jamie Robson and Matthew Smith.

Dundee took charge from the start, controlling the midfield and carrying more threat coming forward. A dangerous free kick by Scott Allan was cleared over the United bar for a corner, from which Mark O’Hara tested Harry Lewis with a far post header. The Dee had a plausible looking penalty claim when Jordie Briels tripped Allan just inside the penalty area, but Mr Clancy waved play on.

In spite of their midfield dominance and frequent, heavy pressure on the United defence Dundee struggled to carve out clear chances against a rugged and hard working back line.

Lewis saved a glancing header by O’Hara at the end of Dundee’s best attack of the first half, a fine sweeping move through Scott Allan, Paul McGowan and Kevin Holt.

After Dundee had controlled the match for the first half hour United started to emerge from their shell and threaten the Dee’s goal. Lacking an outright striker they played some neat football approaching the final third, but were missing a convincing presence in the penalty area.

Sam Stanton was almost clean through, but was denied by great defending by Kevin Holt. Only a minute later another smart move by United ended with Billy King smacking a 15 yard shot against Scott Bain’s right hand post.

Roarie Deacon was enjoying plenty of possession and was regularly racing past Tom Scobbie, but frustratingly couldn’t find the right final ball.

United took the lead against the run of play a minute before half time. Scott Fraser played Sam Stanton into the penalty area on the left and he passed across goal for Paul McMULLAN to screw a trundling shot into the net from a tight angle with Bain wrong footed.

In the early stages of the second half play swept from end to end with United having their best spell of the match. Scott Fraser’s driving run into the penalty was stopped by Cammy Kerr’s fine tackle. McMullan showed skill and persistence to burrow into the box with and King sent a shot across goal and yards wide from a difficult angle.

Just a minute later Deacon raced past Scobbie again and his cross was deflected to Mark O’Hara, who nodded the ball sideways, finding Scott Allan with time and space to lob Lewis. The ball may have been drifting wide and Sofien Moussa headed into the net, only for the assistant referee’s flag to shoot up instantly for offside.

Dundee were now ramping up the pressure on United and looking increasingly dangerous. When the equaliser arrived after 59 minutes it was fully deserved. Deacon moved infield and found Allan clear on the left. The low cross was perfect for Mark O’HARA to sweep the ball home from 12 yards.

Roared on by the supporters the Dark Blues tore at United. Another great run by Deacon ended with Lewis blocking his drive and United scrambling the ball clear. Kevin Holt stumbled as he collected the ball from a corner that was pulled low and deep, but recovered to fire in a fierce shot that Lewis blocked with the loose ball bouncing just out of Moussa’s reach.

After 69 minutes Faissal El Bakhtaoui came off the bench, replacing Mark O’Hara. Paul McGowan moved to a holding midfield role with El Bakhtaoui playing behind Moussa. The next change was Randy Wolters coming on for Scott Allan.

The longer the game went on the more stretched it became. United were still playing good football through the midfield and occasionaly threatening round the edges of Dundee’s penalty area. However, they missed the cutting edge in the penalty area that their veteran substitute Scott McDonald will surely provide when he is fully fit.

The Dark Blues attacks carried more threat and a late goal always looked a strong possibility. An excellent pass by Kerr sent Deacon racing clear down the right, but the cross was overhit. In the four minutes of injury time the Dee piled on the pressure and should have tied the game up. Paul McGowan’s through pass sent Deacon clear, but Lewis managed to block. Jack Hendry had replaced Kerr Waddell, who had been suffering from cramp, and he came agonisingly close to a late winner when he headed Kevin Holt’s free kick against the post and again United scrambled clear.

The danger was not yet over for United and El Bakhatoui saw his 15 yard shot charged down following a corner. Right at the end Moussa was freed on the right, and rather than shooting from an angle he chose to cross for El Bakhtaoui. As happened so often today the cross was poorly judged and United escaped.

The penalty shootout was held in front of the Dundee supporters in the Bobby Cox Stand, but United had the advantage of going first. Paul McMullan scored and then Faissal El Bakhtaoui’s penalty was saved by Harry Lewis. Billy King, Randy Wolters, Lewis Toshney and Sofien Moussa all converted, but Scott Bain saved United’s fourth penalty, by Logan Chalmers. When Darren O’Dea scored the shoot-out was effectively sudden death. Scott McDonald succeded with United’s fifth penalty, but when Harry Lewis saved Roarie Deacon’s spot kick the shoot-out was over with United winning 4-3. That gave them the bonus point to top the group.

The glaring failure today was the Dee’s inability on numerous occasions when they were in space on the flanks to send over crosses that Moussa or the attacking midfielders could get to. Roarie Deacon gave the left side of United’s defence a roasting all day long, repeatedly racing past Scobbie, and the Dee really should have profited from that. Dundee had ample opportunities to win today’s match comfortably long before the end but there was much to admire in midfield and in their approach play. The final outcome might have been frustrating, but there was plenty to whet the appetite for act 2 of the Betfred Cup derby drama, the week after next.