On Saturday the Dundee team travelled to Dumbarton to play of their fifth connection with the Scottish League.

The weather was all that could desired, and a large crowd lined the ropes. Both sides were fully represented, and a hearty cheer accorded the different teams as they crossed the ropes.

The teams were as follows - Dundee - McKie; Ferrier and Brown; Craig, Lougair, and Petrie; Thomson, Reid, Dundas, Gilligan, and Keiller.

Owing to the referee - Mr Lachlan, of the Celtic - being late, the game was about half an hour behind time in being started. Longair won the toss and took advantage of a strong breeze. Dumbarton immediately began to press the ball was run behind. Dundee then took up the running and after some smart give-and-take play in midfield the ball was sent behind.

Gradually the home team worked their way into the visitors territory, and a corner followed. Dundee was quickly at the other end, but Gilligan kicked too high. Up to this point the Dundee men had not properly settled down, and Taylor, on the Dumbarton right was rather too much for Petrie, and from one of his screws the ball struck the wrong side of the net.

Immediately after, the same player sent the ball high over the bar. Warming to their work Keillor and Gilligan were troubling Nash, and the first named player was cheered for a smart piece of work, and getting well up forced McLeod to concede a corner.

Nothing came of it, and in a twinkling McKie was called upon to save twice in succession, his second save being loudly booed.

The forwards of Dundee were now combining well, the backs were cool and steady, while the trio of half-backs were tackling and kicking with good judgment.

A run was initiated by the visitors' forwards, but Gilligan fouled the ball. The free kick that followed caused some anxiety, but the danger was averted, and Keillor the compelled McMillan to kick out. Still pressing, Dumbarton gave a corner. This, however, was cleared, and the forward of the home team getting up Johnston almost succeeded in doing the trick, the ball just missing the visitors post.

With the wind in their favour the visitors were keeping Dumbarton well in check, but were somewhat bothered with the slippery ground. McKie, who had made himself a favourite with the crowd, was loudly cheered for a smart save, while howls of execration greeted Taylor for a bad attempt at shooting when close into goal.

Play was going in ding-dong fashion, being anybody's game. The Dundee forwards, by some neat passing, got well up, but when getting dangerous Keillor was pulled up for offside.

A foul off Longair at midfield was cleared, and at the other end Reid struck the bar, and from the tussle which followed, a corner was given. Nothing came of it, and shortly afterwards half time arrived, and the teams crossed over with a clean sheet.

Immediately after kicking off Longair fouled the ball, and from the pressure which followed Brown gave a cormer, which, however, was passed to Gilligan who shot but McMillan saved. Not to be denied, however, Dundee were soon warming round the home citadal, and from a smart centre by Thomson, Dundas scored amidst cheers.

Both teams now went at it in earnest, and, after some interchange in midfield, Taylor got possession and, passing, a corner was granted, however, was put behind. A foul against Dundee let the Dumbarton down, but Dundee meant business, and Thomson and Dundas were again prominent, and almost succeeded in again lowering the home team's colours, McLeod only saving in the nick of time.

Two corners fell to Dumbarton, but both were cleared, and Thomson while executing fine run, received nasty fall from Smith. A hot scrimmage followed, but Dumbarton worked their way up, and Johnstone, who was suspiciously like offside, receiving a long pass, equalised the game. The cheers were deafening, and the local players were off with a dash, but were met with a cool and steady defence.

Dumbarton for a bit had the most of the play, but McKie wa impregnable, and defied all effort. From a breakaway Dundee got well up, and McLeod was winded in saving. Dumbarton returned to the attack and from a tussle, a corner resulted, which came to nothing, and Dundas, shaking of the half-back passed to Keillor, who placed the ball into McLeod's hands.

The left pair of the visitors were bothering Nash and McMillan, and Keillor, outpacing the defence put the ball across the goal, but the opportunity was lost, there being no one up. Time was wearing on, and excitement ran high. Dumbarton were making determined efforts to sore, but all to no propose, Petrie and Brown keeping Taylor well in hand right up to the finish. The teams played for all that knew, but the whistle blew with the score standing a draw - 1 goal each. 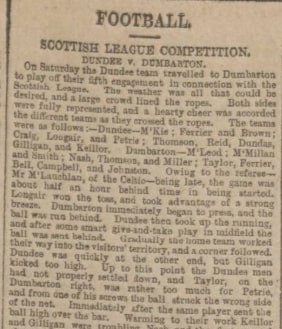