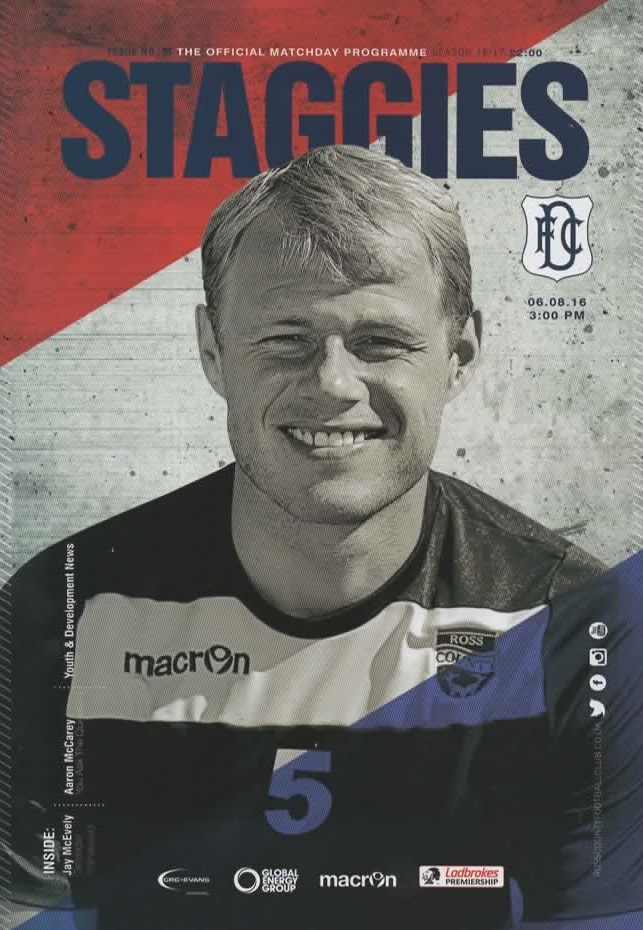 Dundee got the Premiership season off to a flying start with an excellent 3-1 win against Ross County in Dingwall.

Rory Loy set the Dark Blues on their way with two first half goals, the second from the penalty spot. Paul McGowan put the Dee further ahead after half time only for Craig Curran to pull a quick goal back. However, Dundee put in a solid, professional performance to close the game out to the delight of the noisy and enthusiastic travelling support.

The Dark Blues made two changes from last Saturday. Mark O’Hara and Rory Loy started in place of Yordi Teijsse, who was on the bench, and Greg Stewart, who was injured in training. New signing Faissal El Bakhtaoui was named as a substitute. Like Dundee County also ran up a 7-0 win in the Betfred Cup last week and their only change was Scott Fox replacing Aaron McCarey in goal.

The game took a while to get going as both sides slugged it out in midfield without troubling the defences greatly. County were first to threaten when Jay McEveley broke down the left and crossed. Brian Graham miskicked and recovered to scoop the ball beyond Scott Bain, only for Kevin Holt to clear.

Dundee responded by taking control in midfield and putting the home defence under pressure. The opening goal arrived after 13 minutes, beautifully crafted by two of the new boys. Danny Williams clipped a clever ball over the County defence allowing Mark O’Hara to run through on the right and hit a dangerous low cross into the goalmouth, where Rory LOY scored with a crisp, close range volley.

The Dark Blues played with increased confidence after the goal, pressing the Staggies effectively in midfield where James Vincent and Paul McGowan in the holding positions were ably assisted by the hard work of the three advanced midfielders who harried County mercilessly as they tried to build attacks. Dundee always lookedcapable of extending their lead and Loy went close to a second goal when he drilled an 18 yard shot narrowly wide after good approach play by O’Hara and McGowan.

Late in the first half Dundee put serious pressure on County with a series of corners. The Dark Blues movement at set pieces had been posing problems, and Jay McEvely gave away a penalty when he hauled Mark O’Hara down at the far post as Michael Duffy’s corner came in. Rory LOY scored confidently from the spot, as the large Dee support behind that goal celebrated.

Dundee almost added a quick, killer third goal. Mark O’Hara’s run from midfield took him past two defenders and through with only Scott Fox to beat. After doing the hard part so well sadly he couldn’t finish and just missed the outside of the post with his shot.

The Dark Blues started the second half well, looking for a decisive third goal. Danny Williams combined neatly with Cammy Kerr before dribbling his way along the byline but Rory Loy couldn’t get a shot away when the cross came in.

County started to push Dundee back, and launched a series of high balls into the penalty area but the Dundee defence held firm against the aerial assault. The Dark Blues were secure on the flanks where the full backs, Cammy Kerr and Kevin Holt both had fine games. They had highly effective assistance from the wide players in front of them, Danny Williams and Michael Duffy. As a result the Staggies were forced to fall back on crosses from poor positions that Darren O’Dea and Julen Etxabeguren dealt with confidently.

Just after the hour the Dark Blues grabbed the crucial third goal with a swift and ruthlessly executed goal on the break. James Vincent blocked McEveley’s attempt from 30 yards and the Dark Blues raced up the field. Loy swept the ball out to the right allowing Duffy to run clear and roll a pass infield for Paul McGOWAN to score with a first time shot under Scott Fox.

Scott Bain pulled off the save of the match to touch Michael Gardyne’s curling effort round the post, but the Staggies scored from the resulting corner. The ball broke to substitute Craig CURRAN, 16 yards out and his deflected shot flew past Bain.

In the remaining 25 minutes County put Dundee under sustained pressure, but failed to create clear chances. Dundee looked more composed in possession, and when they had the ball looked more dangerous. Faissal El Bakhtaoui replaced Danny Williams for the last 20 minutes, then Nick Ross came on for Michael Duffy to help the Dee see out the match.

Mark O’Hara had a very impressive league debut and he set up a late chance by forcing his way through two tackles on the right. James Vincent then found Rory Loy, whose curling 18 yard shot was saved by Fox.

Dundee opened the league campaign last year with a spectacular 4-0 win at Kilmarnock. This win had none of the fireworks that the Dark Blues served up that day, but it was an excellent, professional performance at a very difficult venue where Dundee have struggled in recent seasons. The Dark Blues were tight, hard-working and effective all over the park and took their chances well. The defence acquitted themselves well under some fierce late pressure, and the midfield was far more assured and incisive than the hosts, with Rory Loy taking the chance to show what he can do, both as a scorer and linking with the midfield.

Many supporters might have been nervous looking at the line-up, with Kane Hemmings having been sold and Greg Stewart unavailable. However, today’s team served notice that there is plenty of quality throughout the squad and fully deserved their hard fought win.