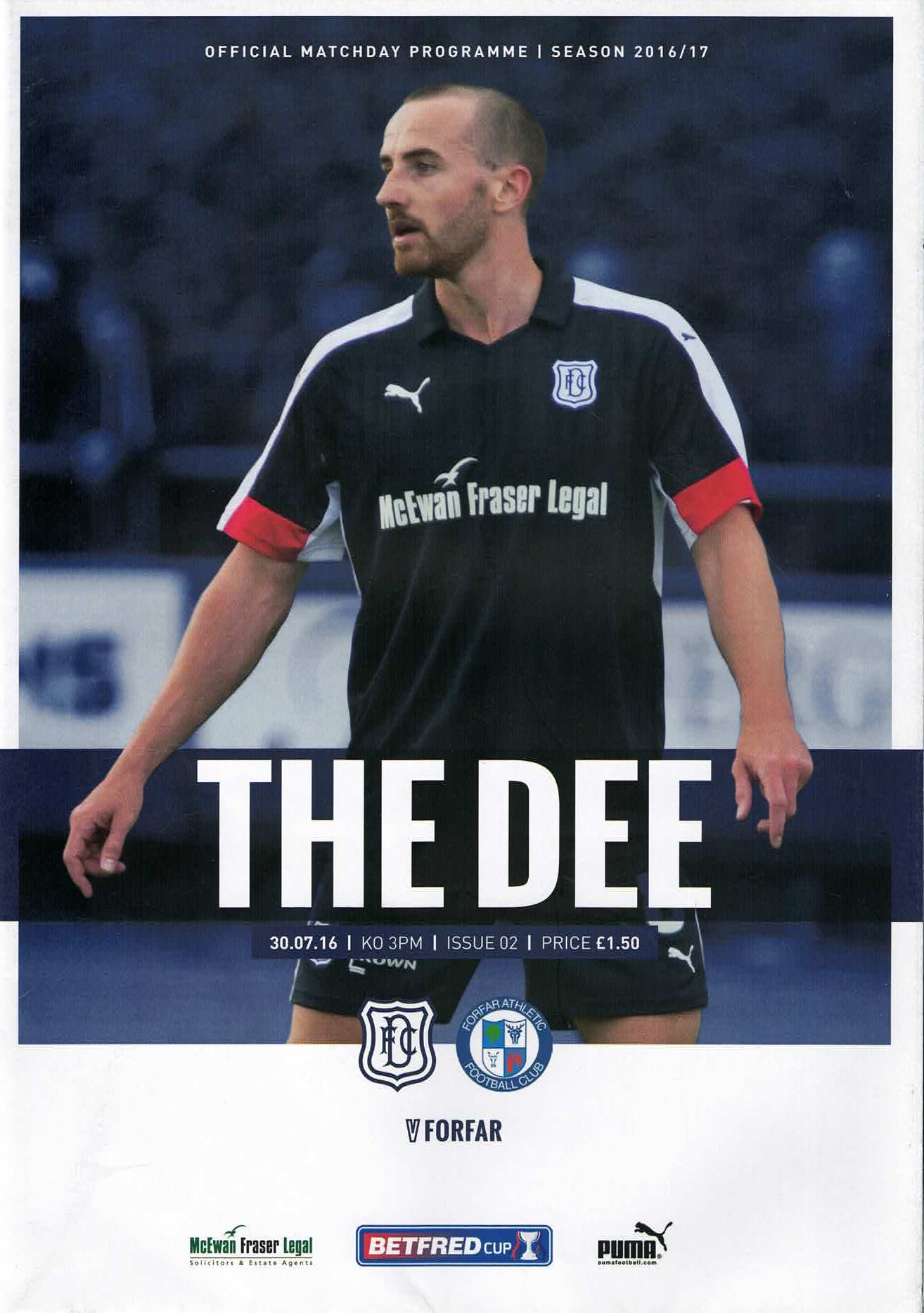 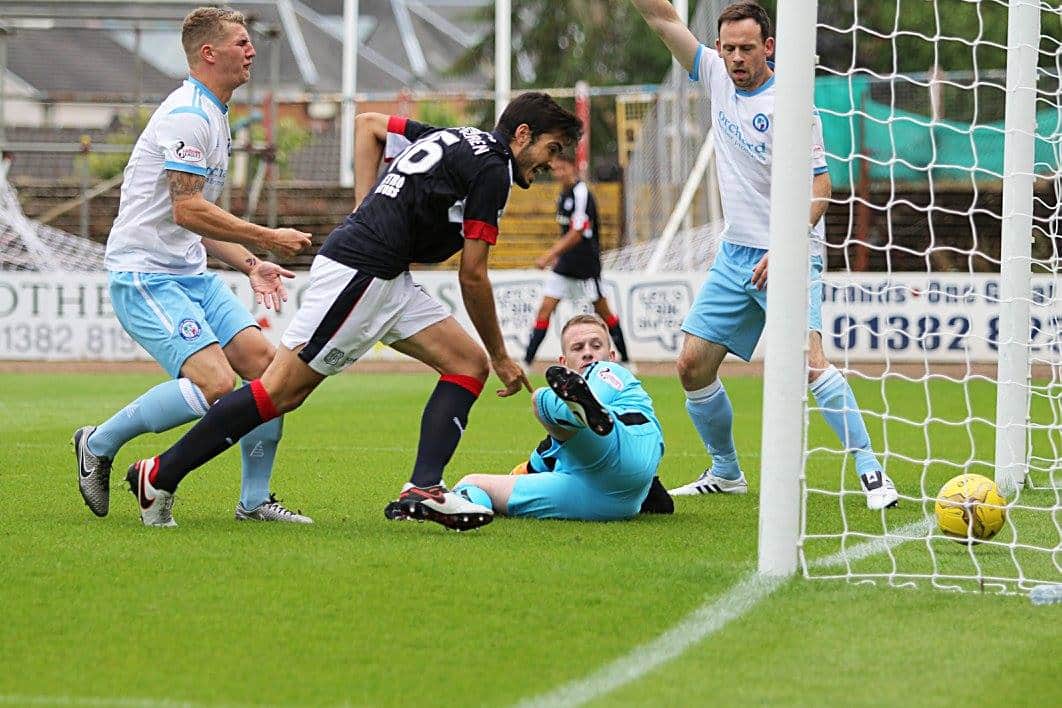 For the second Saturday running Dundee served up a feast of goals as they pummelled Forfar Athletic 7-0 in the Betfred Cup at Dens Park. The Dark Blues were in total control from the start and enjoyed a 3-0 lead at half time with goals from Paul McGowan, Michael Duffy and Greg Stewart. There was no easing up in the second half as Julen Etxabeguren, Greg Stewart, Rory Loy and Yordi Teijsse added four more goals. Sadly that wasn’t enough to keep the Dee in the cup following results elsewhere, but the players could hardly have done more on the day.

The Dark Blues made three changes following the midweek defeat at Peterhead. Michael Duffy and Yordi Teijsse came in for Craig Wighton and Rory Loy while Paul McGowan kept his place after replacing the injured Mark O’Hara early in Tuesday’s match.

Although it took a while for any serious goal threat to develop Dundee took charge from the start with some confident play. The Dee were moving the ball around well and making some dangerous runs off the ball from midfield. After 17 minutes Dundee took the lead when one of those runs paid off in delightful style. Greg Stewart ran in from the right wing and played a superb, reverse chipped pass over the Loons’ defence for Paul McGOWAN to run through and lob Loons’ keeper Grant Adam from 18 yards.

The goal helped the Dark Blues to settle into a smooth attacking game and they looked increasingly dangerous. Yordi Teijsse’s header brought a good save from Adam when he reacted quickly to redirect McGowan’s fierce but wayward 22 yard shot. Adam had to save again from Teijsse when the Dutch striker threw in a spectacular overhead kick following a corner.

The play was almost entirely in Forfar’s half as the visitors struggled to keep Dundee at bay. Greg Stewart fired a 30 yard free kick just too high before the the second goal arrived on 34 minutes from even further out. Michael DUFFY turned on the ball 35 yards from goal and lashed a magnificent rising shot into the net off the underside of the crossbar. It was a spectacular way to open his competitive goalscoring account for the Dark Blues!

The Dee needed only four more minutes to score goal number three. Duffy chipped a cross beyond the far post where Kevin Holt headed the ball back across goal. Teijsse couldn’t force the ball in at the near post but Greg Stewart followed up with a header from six yards. Adam parried but was helpless as STEWART stroked the loose ball over the line from a tight angle.

The pressure on Forfar was relentless and Adam had to make two good saves in the last few minutes of the first half. First he beat away a curling Stewart effort, before making an instinctive save after Teijsse’s smart turn and shot.

Any suspicion that Dundee might ease up in the second half was quickly put to rest. Michael Duffy played a great ball over the top for Paul McGowan to run onto, but he couldn’t get enough on his shot and Adam pushed the ball wide. Danny Williams then shot inches past the post after being sent clear by Stewart. The fourth goal came from a corner, and was Julen ETXABEGUREN’s first goal for the club. He pushed the ball over the line from point blank range after Adam couldn’t hold O’Dea’s header.

Just after the hour mark Danny Williams and Michael Duffy made way for Craig Wighton and Rory Loy, the newcomers ensuring that all the play remained firmly directed towards the Loons’ goal. The fifth goal soon followed. Craig Wighton turned Kevin Holt’s hard, low cross back to Greg STEWART who curled a lovely first time shot from 18 yards into the top corner.

Stewart came close to a hat trick but narrowly missed from Craig Wighton’s cutback. Cammy Kerr was causing Forfar endless problems with his lung-bursting runs down the right. Rory Loy got on the end of one of his crosses but Adam saved well. LOY had more joy with Kerr’s next cross, and his diving header at the near post flew past Adam for number six after 71 minutes.

Scott Bain could hardly have had a quieter afternoon. His duties for the day consisted of fielding the occasional cross, taking backpasses and moving the ball on to his defenders. 10 minutes from time, in a rare Forfar attack, substitute Lewis Milne did connect well with a 25 yard shot but it sped a couple of feet over Bain’s bar

Darren O’Dea stayed up front following a corner and entertained the fans with a cheeky effort when he lifted the ball over a defender and tried his luck with an overhead kick from 16 yards. Adam saved comfortably but the Loons’ keeper was given no chance with the seventh goal near the end when Yordi TEIJSSE smashed home his first goal for the Dee, with a powerful far post header from Wighton’s cross.

It’s 29 years since Dundee last scored seven goals at Dens, in a 7-3 win over Hamilton, and today’s scoreline was a fair reflection of Dundee’s dominance. They outclassed the Loons all over the park and were in no mood to take things easy once the points were safe. There’s never a bad time to score seven goals, but doing so immediately after selling Kane Hemmings, last season’s top scorer, was certainly pleasing. It was good to see six players sharing out the goals, and especially to see three players claiming their first goals for the club in senior competition.