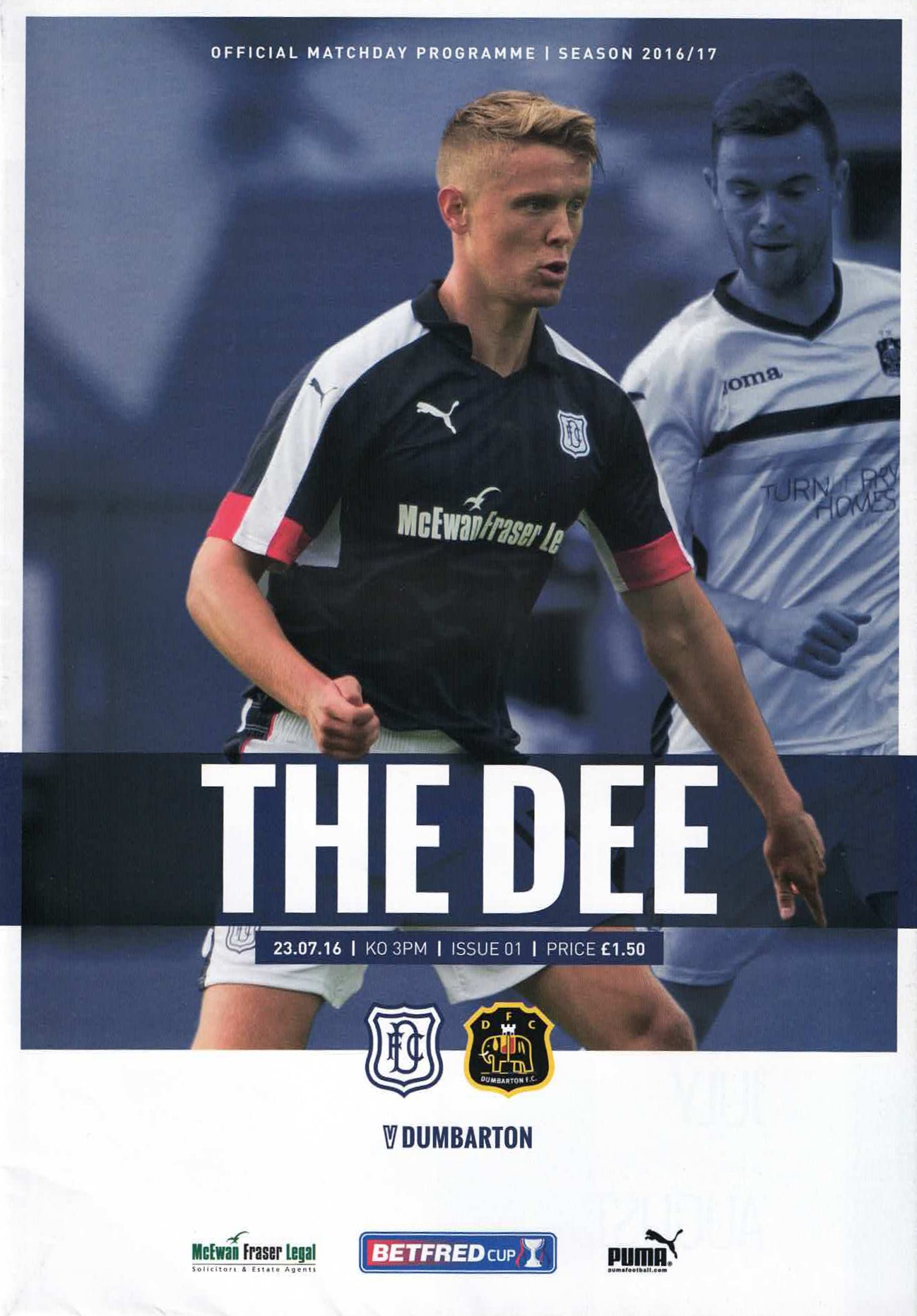 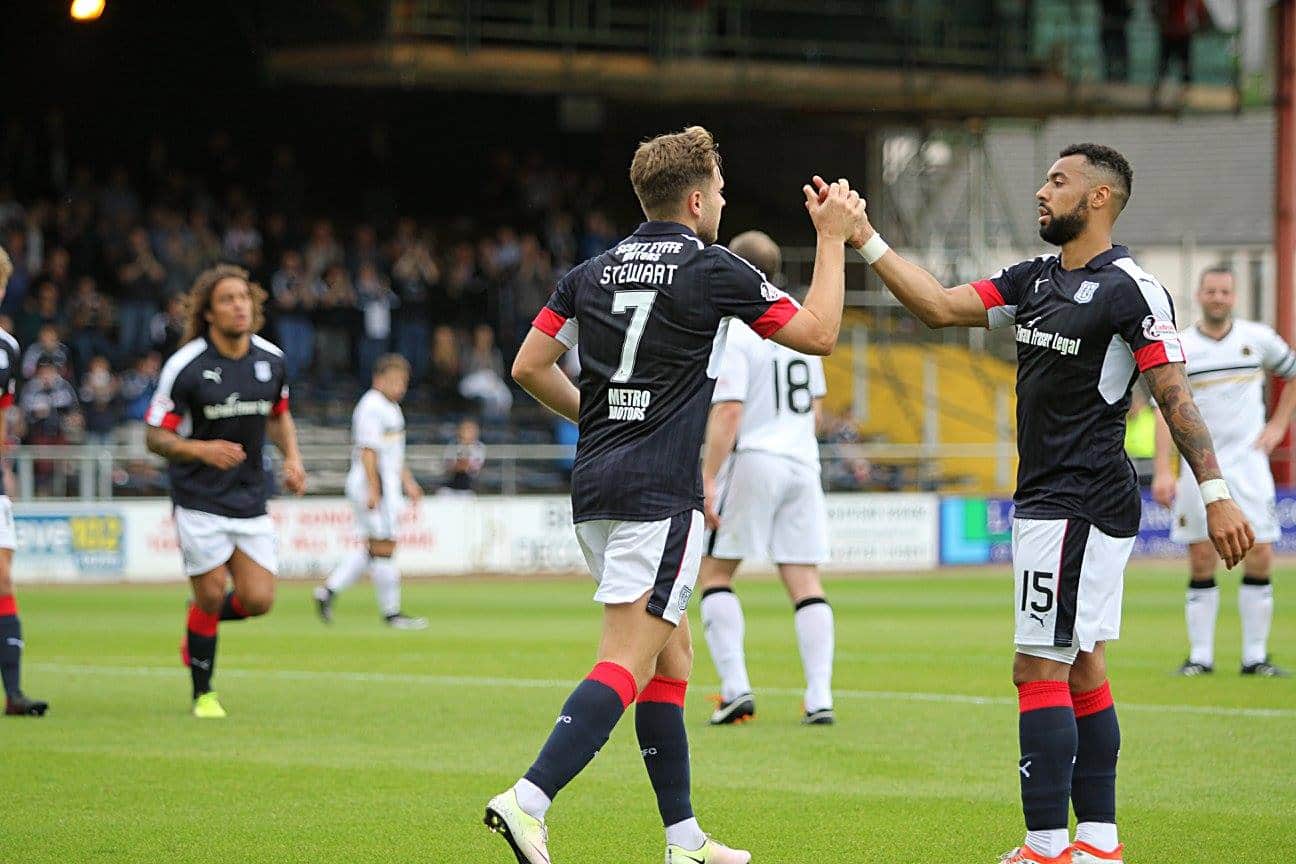 Dundee thrashed Dumbarton 6-2 at Dens Park today in a Betfred Cup tie of wildly contrasting halves. The Sons were worth their 2-1 lead at half time with goals from Frazer Wright and Gregor Buchanan after Greg Stewart had put the Dee ahead. In the second half the Dark Blues’ attacking game clicked and they blew Dumbarton away with five goals in a terrific performance. Kane Hemmings scored twice, Greg Stewart completed his hat trick with two more goals and Darren O’Dea scored his first for the club.

After starting slowly Dundee gradually increased the pressure on the Sons’ defence, keeping possession patiently as they probed for an opening. After 15 minutes Cammy Kerr was tripped on the right as he headed for the byline. Greg STEWART curled the free kick across goal and into the far top corner. Keeper Mark Brown completely missed the shot, distracted by Darren O’Dea hurling himself across his face as the ball flew by.

The Dark Blues looked like they would settle comfortably into control after taking the lead. They continued to dominate possession and Rory Loy flashed a shot narrowly wide after Stewart had set up the chance with a run in from the right wing.

The game turned on its head midway through the first half when the Dark Blues gifted a soft equaliser to Dumbarton. A corner was cleared only as Gary Fleming 30 yards out. He crossed the ball beyond the far post where Robert Thomson knocked it down into the goalmouth for Fraser WRIGHT to scramble it over the line. David Mitchell managed to claw it away, but the assistant referee was well placed to signal that the ball had crossed the line.

Dumbarton’s confidence grew visibly after equalising. They were working hard, keeping their shape, denying Dundee space and attacking eagerly if without great threat from open play. Set pieces were another matter, however, and the Dark Blues looked vulnerable from corners.

Just after the half hour the Sons took the lead with a goal that, if anything, was more disappointing for the Dundee defence than the first. Robert Thomson was almost unchallenged as he powered a header from Stevenson’s corner past Mitchell. Kerr, on the line, managed to knock the ball against the crossbar, but Gregor BUCHANAN followed up to score.

Dundee struggled to play their way through Dumbarton’s defence in the remainder of the first half. Only once did they offer any real threat. Kane Hemmings broke to the byline and rolled the ball back for Duffy to shoot from 15 yards, but Mark Brown pulled off a great save to keep the Sons ahead. Apart from that Dumbarton were comfortable, holding Dundee at bay and looking increasingly dangerous on the break.

The Dundee players left the pitch to sporadic booing when half time arrived. Whatever was said in the dressing room at half time the effect couldn’t have been more dramatic. The Dark Blues were a team transformed right from the starting whistle. The equaliser took only two minutes to arrive. Kane HEMMINGS was hovering on the shoulder of the last defender and took Rory Loy’s pass to run on and crack a low shot past Brown.

Just as Dumbarton’s first goal had changed the match this quick equaliser turned the game emphatically in the Dark Blues’ favour. The crowd got behind the players, the passing and movement improved dramatically and it seemed only a matter of time before the Dark Blues went ahead.

Greg Stewart almost scored a quick third at the end of a clever passing move, but Brown saved well. The Sons’ keeper did even better with a superb double save, first recovering to block Rory Loy’s deflected shot, then parrying Michael Duffy’s follow up. Another lovely flowing move from Stewart and Hemmings ended with Loy firing just too high from the edge of the penalty area. Loy forced another save from Brown when he stretched to get his boot onto a short passback.

Mark O’Hara came on for James Vincent midway through the half, and he almost scored an instant debut goal. His header from Stewart’s corner glanced off Hemmings and was scrambled off the goal-line.

It was no surprise when the pressure finally paid off. Danny Williams had come on for Michael Duffy and he was fouled 40 yards from goal. Stewart flighted in a good delivery and skipper Darren O’DEA crashed a powerful header into the top corner.

The fourth goal came only a minute later. Mark O’Hara raced down the left and skipped over Buchanan’s challenge. His cross was missed by everyone, but Greg STEWART arriving from the right collected the ball, danced his way into the centre of the penalty area, making space with some of his trademark dummies before hammering the ball into the roof of the net.

Dundee were now turning on the style and looked like scoring every time they attacked. STEWART completed his hat-trick when he ran through the middle, exchanged passes with Kevin Holt and slipped the ball past Brown.

Yordi Teijsse replaced Rory Loy and set up goal number six with a delightful flick that released Kane HEMMINGS. The Dee striker had to run in from 35 yards before scoring with supreme confidence.

With all three substitutes committed Dundee had to play the last few minutes with 10 men after Nick Ross was injured. Even when they were a man down Dundee still pushed Dumbarton back but couldn’t add to their tally. The substitutes all made noteworthy contributions. Mark O’Hara and Yordi Teijsee eached chipped in with an assist, and Danny Williams delighted the crowd with clever play on the left.

The Dark Blues’ slow start showed that they are still short of full match fitness and sharpness, but in the second half they showed that when they start playing with confidence and intensity they are one of the most exciting sides in the country. The last 45 minutes were a real pleasure to watch. The defence was more solid than in the first half, the midfield dominated, and the forward play was both deadly and stylish. The challenge for club historian Kenny Ross is now to find the last game in which Dundee scored five goals in a single half!