It fell to the honor of the Leith Athletic to introduce to Edinburgh football the combination bearing the name of Dundee.

Unfortunately for the financial success of the meeting, one of the greatest contents of the Scottish League championship meeting was being decided at Tynecastle, and instead of a big crowd welcoming the visitors, only 4000 spectators would bu inside Bank Park at the hour of start. The weather was fine, the only drawback being a strong sun.

The Dundee men were accorded a hearty reception as they stepped into the arena, their neat attire being freely commented upon. The only change from the advertised team was that at half-back, where M'Naughton displaced Petrie, the latter having missed the train.

The Athletic lost the toys, and opened with a glaring sun in their faces. Their opening dribble was cleverly cleared, and Gilligan and Keillor went off in a beautiful run. They carried the ball right through the Leith defence, and it took Russell all his time to get rid of Keillor's shot.

Clever work by the Leith forward line enabled them to get well down on McKie, and just as they were looking dangerous Brown strapped in and "whacked" the ball out from the very goal line. Still, however, the Athletic kept hovering round, but all that rewarded their efforts was a fruitless corner. This seemed to wake up the Dundee forwards considerably, and it was not long before Rassell was again interviewed.

The visiting half-backs were playing a really magnificent game, and it was principally through their efforts that the game was kept around the Leith posts. A foul gave them a good chance, but it was badly placed, and Anderson had little difficulty in clearing. The Leith forwards broke sway in rattling style, but C. Henderson did not make much of the chance presented to him, and the ball landing at Thomson's foot, the Dundee forward set off in a brilliant run.

He "bested" a host of opponents, and when he reached the corner flag he screwed in beautifully, and Dundas, catching it on his head, had little or no difficulty in putting Dundee one up.

After this reverse the Athletic put any amount of vigour into their play, and for some time the opposing defenders had all their work out out for them to keep their charge intact. A foul close in was smartly cleared, and then a couple of corners fell to their lot. Both were excellently placed, but Ferrier and Brown were in fine form, and all danger was eventually cleared.

Keillor had a splendid run right down the field, but McCartney stuck to him, and was successful in stopping the Montrose man's career. Soot carried the ball down the field, but when he was settling himself for a final effort, Longair tripped him up, and of course a foul was given

The kick was well placed by C. Henderson, and from the scramble which followed the game was equalised. The Leith team thereafter continued to have the pull of matters, but Craig managed on several occasions to stop the leather when it looked like going through.

Led by Keillor the visitors rushed up the yield, and - it was only brilliant heading by McCartney that kept them once more from drawing ahead. In one of their attacks Scott was badly lamed and had to retire. Taking advantage of his absence Dundee made desperate efforts, and Keillor getting the ball a few yards from the goal banged through the leading point.

The home team redouble their efforts, and just before the interval arrived Lee, after a clever ran down, once more put the teams on level terms. For a long time the Leith kept up a continual pressure, but the clever work of Craig and the mighty Longuir always managed to barr the way.

Reid, however, soon put his team once again into the ascendant.

The Athletic were now beginning to realise that they had a team opposed to them which was powerful in every sense of the word, and their following play was desperate in the extreme.

Dundee, however, were now in their very best form, and if Keillor had played the ball instead of the man his side would most decidedly have been a goal or two higher up.

Another point, however, was not far off.

After some more forcible work Gilligan further increased the northerners' lead. The all important two points were now very dim from a Leith point of view, and the occupants of the state began to shout in no unmeasured terms to their favorites.

The excitement was great as the Athletic fought with desperation around McKie, and the cheering was tremendous when Mann scored another point. The game, however, a loss and won by this time, and Dundas scoring another point, the game ended :-Dundee, 5 goals; Leith Athletic, 3 goals 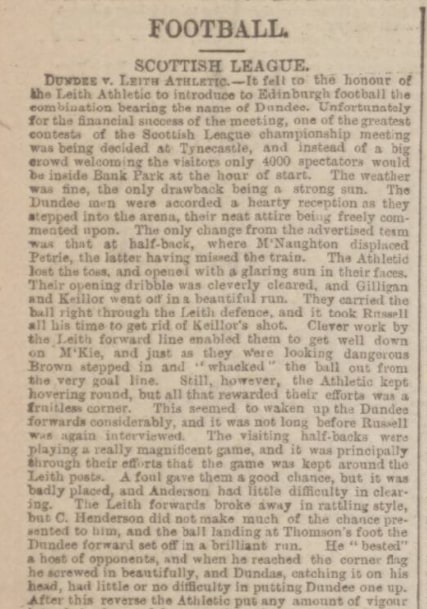