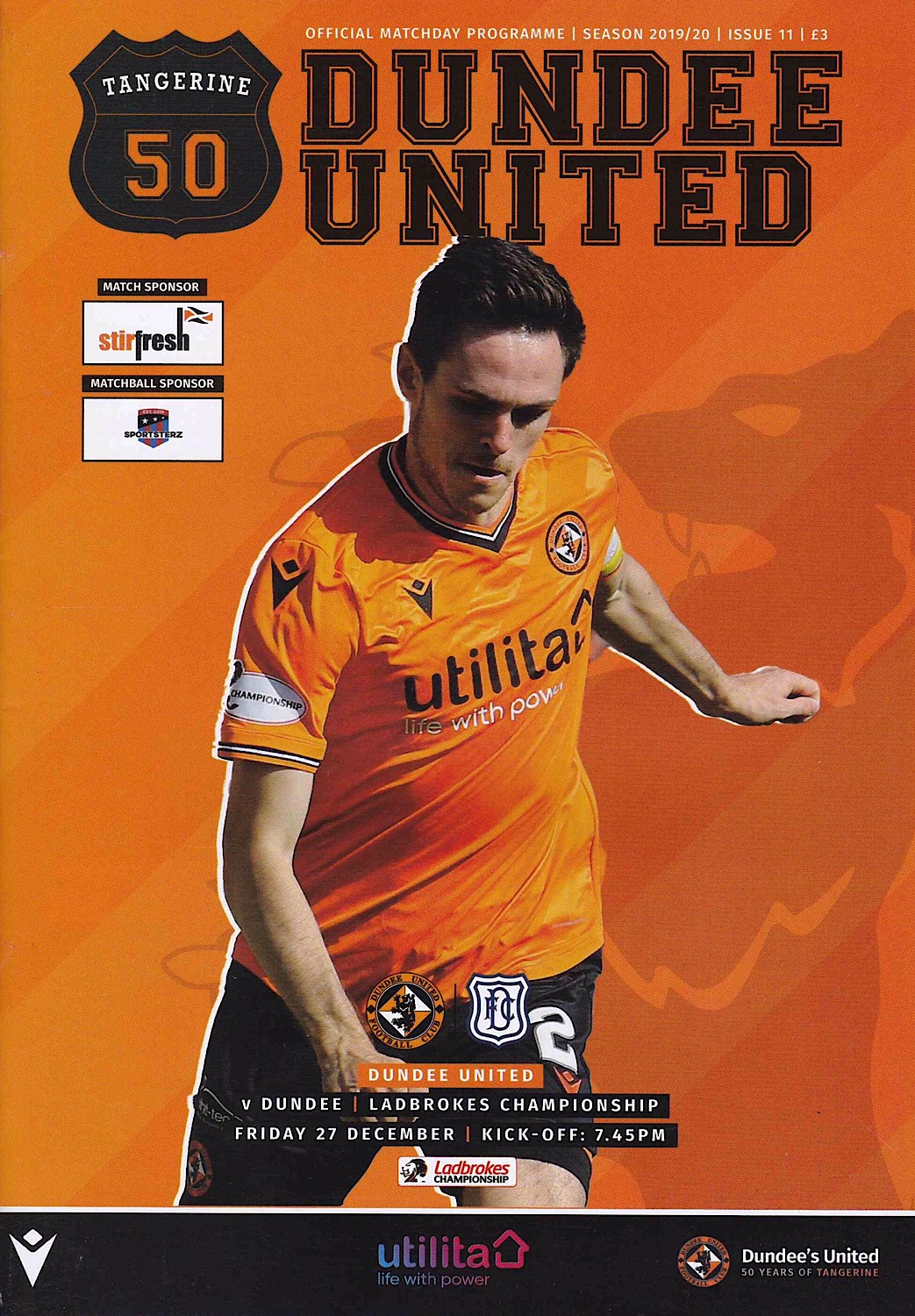 The Dark Blues ended 2019 with a well earned point from a 1-1 draw in the derby at Tannadice. Nicky Clark gave United an early lead and the home side had the better of the first half. Dundee came out strongly after half time and Graham Dorrans quickly equalised. The Dee edged the rest of the second half but had to settle for a point.

The Dee were unchanged from the team that won at Partick on Saturday. United’s only change was Louis Appéré replacing Sam Stanton

United took the lead with the game’s first serious attack. The home side overloaded their left to outnumber Cammy Kerr. Louis Appéré sent Jamie Robson clear on the overlap and the full back powered a low cross into the six yard box for Nicky CLARK to flick the ball past the helpless Jack Hamilton.

The Dark Blues struggled to get forward and launch any worthwhile attacks in the fist quarter of an hour. Gradually they grew into the game and created a couple of half chances. Paul McGowan spun on a cross by Jordan Marshall and his shot from 12 yards was deflected for a corner. Fin Robertson opened up the United defence with a delightful chipped pass over the top, but home keeper Benjamin Siegrist managed to block.

After that promising spell of 10 minutes Dundee again had difficulty worrying United’s defence. The home side were the more dangerous in a messy match that was littered with fouls and which could have seen even more free kicks had the referee been fussier. The game might have been scrappy, but it was the Dark Blues who were making most of the errors with United much the tidier side.

Lawrence Shankland turned on the ball in a penalty box scramble, but couldn’t connect cleanly with his shot and Hamilton saved easily. The Dee goalie had to work harder in first half injury time when his defence failed to clear and Ian Harkes was able to get a shot in, but Hamilton parried.

Dundee emerged from the half time break in a very different mood and were a far more effective outfit for the rest of the match. Their attacks in the second half were more determined and creative. The Dark Blue support didn’t have to wait long for the improvement to see the results, with the equaliser arriving four minutes after the restart.

Kane Hemmings and Danny Johnson attacked down the right and Hemmings’ cross into the goalmouth was headed clear only as far as the edge of the penalty area. Graham DORRANS took a touch and lashed his low shot into the corner of the net. The touch was delightful, but it was Dorrans’ movement that made the goal. When Hemmings was about to cross, with everyone else charging into the goalmouth, Dorrans took a few steps backwards into the space that suddenly opened up. When the header came out he was all on his own waiting for the ball, with time to take a crucial touch before scoring.

The goal lifted the Dark Blues and unsettled United who were never again as tidy or composed as they had been in the first half.

Five minutes later Sean Mackie lifted a great pass over the top of the United defence but with only Siegrist to beat Johnson barely connected with the dropping ball, sending his effort well wide.

The game opened up with the ball being battered relentlessly from one of the park to the other. United’s goal machine Shankland was given precious little opportunity to add to his impressive goal tally and became frustrated at the quality of service he was receiving. He had only a couple of opportunities in the second half but these hardly qualified as half chances. He got on the end of a McMullan cross at the far post, but headed wide. Late on he managed to screw a shot goalwards, but without the power to worry Hamilton.

Dundee opted for long balls more often than they have done in recent months, hoping for a flick to spring one of the strikers free. However, they mixed up their game and played some nice passing football too.

The longer the game went on the more dangerous Dundee looked. In the final 15 minutes they had a series of promising attacks, playing some good football approaching United’s penalty area, but they couldn’t find the right final ball. None of the threatening attacks turned into real danger and although Siegrist was kept busy he didn’t have to make anything more than routine saves and catches.

The two minutes of injury time were spent in the United half as the Dark Blues pushed for a winner but it wasn’t to be. Over the full match a draw was a fair result, and after recent derby disappointments most Dees would have settled for a single point when United took their early lead.

The Dark Blues earned the draw with a determined, fighting display. The players gave their all, to a man. The defence recovered well from the loss of the early goal. The midfield became increasingly influential the longer the game went on, and in attack the Dee players ran their hearts out. At the end the supporters acknowledged that effort with generous and heartfelt applause.