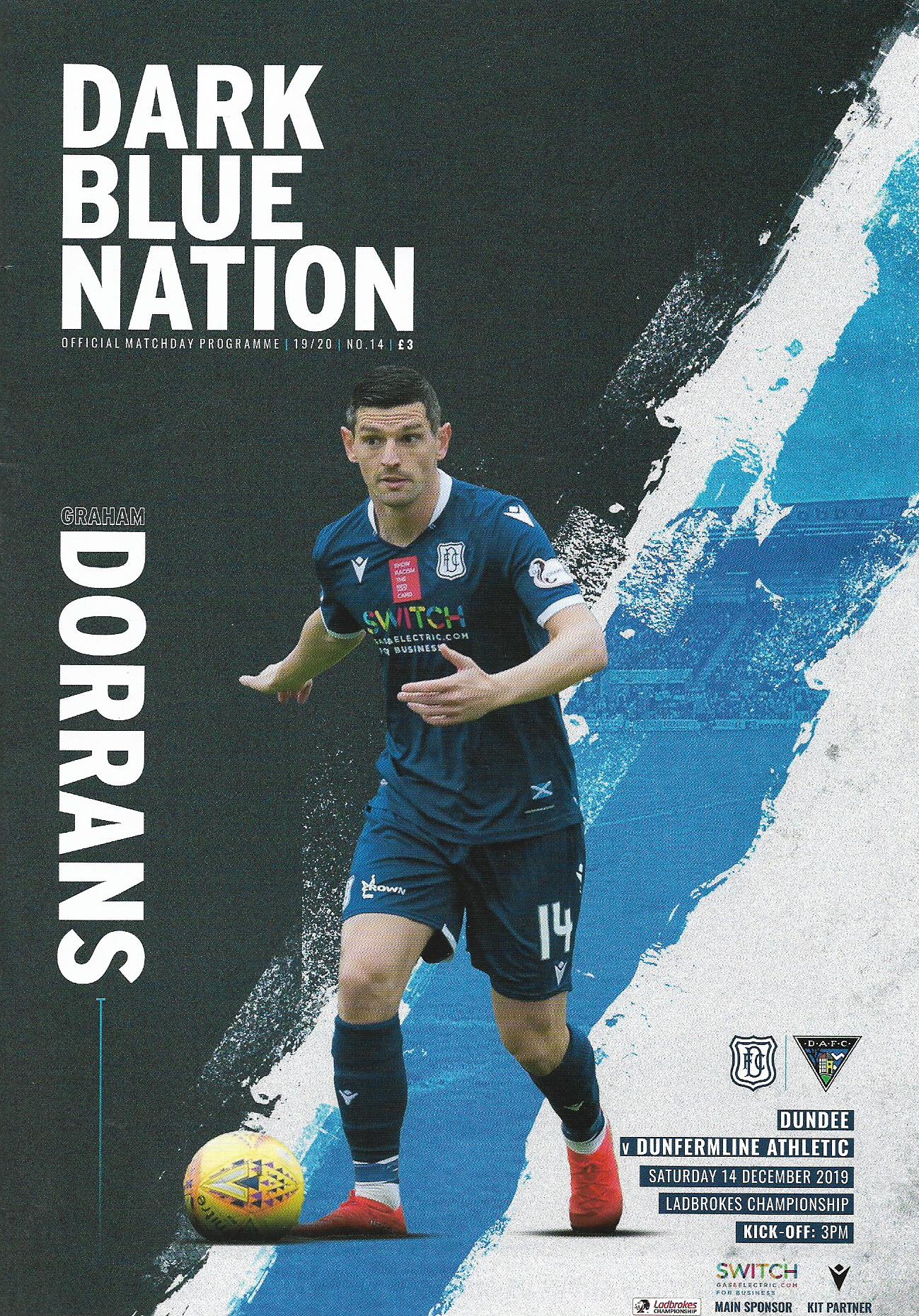 Dundee returned to winning ways with a 4-3 victory over Dunfermline Athletic at the Kilmac Stadium at Dens Park this afternoon. An own goal by Danny Devine gave the Dee an early lead but Ryan Dow quickly equalised. Goals by Kane Hemmings and Paul McGowan put the Dark Blues firmly in charge by half time. Danny Johnson scored number four at the start of the second half only for goals by Kevin Nisbet and Lewis Martin to offer the Pars some hope midway through the half. Hampered by Greg Kiltie’s red card Dunfermline couldn’t complete the fight back and the Dee closed the game out to take all three points.

The Dark Blues made three changes to the side that drew at Arbroath. With the exception of Jordan Marshall, who returned from injury in the place of Sean Mackie, it was the same Dee eleven that finished the match last week. Paul McGowan and Finlay Robertson stayed in the team after coming off the bench to replace Shaun Byrne and Josh Todd. The Pars’ only change was captain Lee Ashcroft coming back in Joshua Edwards’ place.

Dundee have been criticised for not sending enough shots on target and they soon started to rectify that statistic. Ryan Scully pulled off a fine save to deny Graham Dorrans, who had cut in from the right before curling a shot from 18 yards that was heading inside the far post.

The Dark Blues took the lead after 14 minutes with a lightning break out of defence. Four Dees raced over the half way line against two defenders. Declan McDaid drew one of them, pushed the ball past him and passed low across goal. With dark blue shirts queuing up to score Danny DEVINE was left in the unfortunate position of having to lunge at the cross to prevent a certain goal. His luck was out and the ball flew into his own net.

It took the Pars less than 60 seconds to equalise. A dreadful stat for the Dee is that the last three times they scored at Dens they have conceded a goal within a minute. This time the defence got in a mess allowing Kevin Nisbet to to pull the ball back for Kyle Turner whose shot was deflected back into the path of DOW who couldn’t miss from close range.

The Dark Blues had been attacking with conviction and they didn’t allow the setback to unsettle them. It took just under 10 minutes to get back into the lead.

Cammy Kerr nipped past Martin and flighted over the sort of cross that has the fans sucking in their breaths waiting to see what would happen. Kane HEMMINGS had peeled into space and had more than enough time to plan his celebration routine before cushioning a precise header back across Scully and into the net.

Jordan Marshall and Cammy Kerr were making a huge contribution raiding down the wings, with Declan McDaid posing a constant threat to the Pars. After 33 minutes McDaid set up the third goal beautifully, skipping past a defender before teeing up Johnson to shoot. The striker scuffed his shot, but set up an open goal for Paul McGOWAN to shoot home at the far post.

Dundee kept attacking and looked good value for a fourth goal before the interval. Ryan Scully saved well from a fierce Johnson shot. The Pars’ keeper’s next save was even better. Hemmings’ low drive flew through Johnson’s legs and Scully reacted well to keep the ball out.

Dunfermline looked dead and buried when Dundee ripped them open for a fourth goal within 40 seconds of the restart. Johnson sent Hemmings through but the shot was blocked. JOHNSON had followed up and the ball fell nicely for him to smash home from 12 yards.

The Dark Blues were now firmly in charge and were given a further advantage when Greg Kiltie was sent off after receiving his second yellow card.

Jordan McGhee picked up an injury and was replaced by Josh Meekings. Within six minutes Dunfermline had pulled two goals back through a mixture of Dark Blue complacency, carelessness and bad luck.

After a prolonged spell of Dundee keeping possession in the Pars’ half, passing the ball around, making the 10 men chase shadows, the visitors got the chance to clear. The ball was launched deep down the park for Kevin Nisbet to chase. The Dark Blues were short handed at the back and NISBET was allowed to pick the ball up too easily. From wide on the right he tried a speculative shot that flew past Hamilton who was caught out by the power and should really have done better.

That was a poor goal to concede, and the Dee followed that up by losing an unfortunate goal only three minutes later, after 71 minutes. Lewis MARTIN tried his luck from near the corner of the penalty area and his shot took a deflection to beat Hamilton, ending up just inside the far post.

The two quick goals transformed the mood in the ground. The away fans had been silent and the Dees had been in cheerful mood. Now the Pars’ supporters cranked up the noise and the home fans were quiet or noisily critical.

In fact little had changed. Dundee were still dominant in midfield and the 10 men were struggling to get forward, relying on breakaways or set pieces. In different circumstances the last 20 or so minutes, including injury time, would have felt comfortable. However, the knowledge that the margin was now only one goal, and the Pars had managed to scramble two quick scores meant that there was plenty of justifiable nervousness.

In the end Dunfermline couldn’t create any more real danger and Dundee killed the game off without taking any risks hunting a fifth goal. The Dark Blues should certainly have had a late penalty when Jordan Marshall was sent spinning through the air by Devine’s wild, late challenge. It was deep inside the penalty area, and the ball was long gone, but no penalty was awarded, perhaps because the challenge was so late the referee missed it.

This was a strange game, but highly entertaining. After the recent poor run it is important to note the positives, and there were more of them than negative points.

The Dark Blues played exciting attacking football in the first half. They were making good runs, passing imaginatively and with penetration, and getting good crosses into the box. The strikers were eager and getting into good positions to shoot. The midfield and the strikers were linking well. The tempo was good. It was marvellous to see the Dark Blues breaking at speed and in numbers to set up the opening goal. Jordan Marshall deserves great credit for his tireless work on the right. Without a natural specialist left sided midfielder he was required to provide an attacking threat on the left whilst covering at the back. It was a tough gig, but he made a massive contribution on his return from injury.

That was all very enjoyable. However, the defence did not have a great game. Conceding a swift equaliser immediately after scoring the first goal, then allowing the Pars a sniff of a hope were frustrating. Guys, give us a break and allow us to relax as the clock ticks down! But in conclusion, this was fine entertainment, and so much more enjoyable than in recent weeks.

Good afternoon and welcome to today's match against Dunfermline Athletic.

Welcome to Stevie and his backroom staff and both sets of supporters along to Dens.

Last weekend was a disappointing one as we didn't come away with a win.

We went into that one on the back of three defeats and to go in 1-0 down at half time after being questioned the players showed that character. It wasn't enough because we didn't win the game but we challenged them to be better in the second half and they were.

It was much of a muchness in the first half but they posed more threat to our goal. In the second half we had by far the better chances. It's a big game this afternoon and we need to be really positive and take the game to them.

Dunfermline are a good side and we know what they will bring to Dens today. Our opening fixture against them was a long time ago but I'm expecting another tough match this afternoon.

Today is the final home match of the year and we are determined to end it with a good performance and a result.