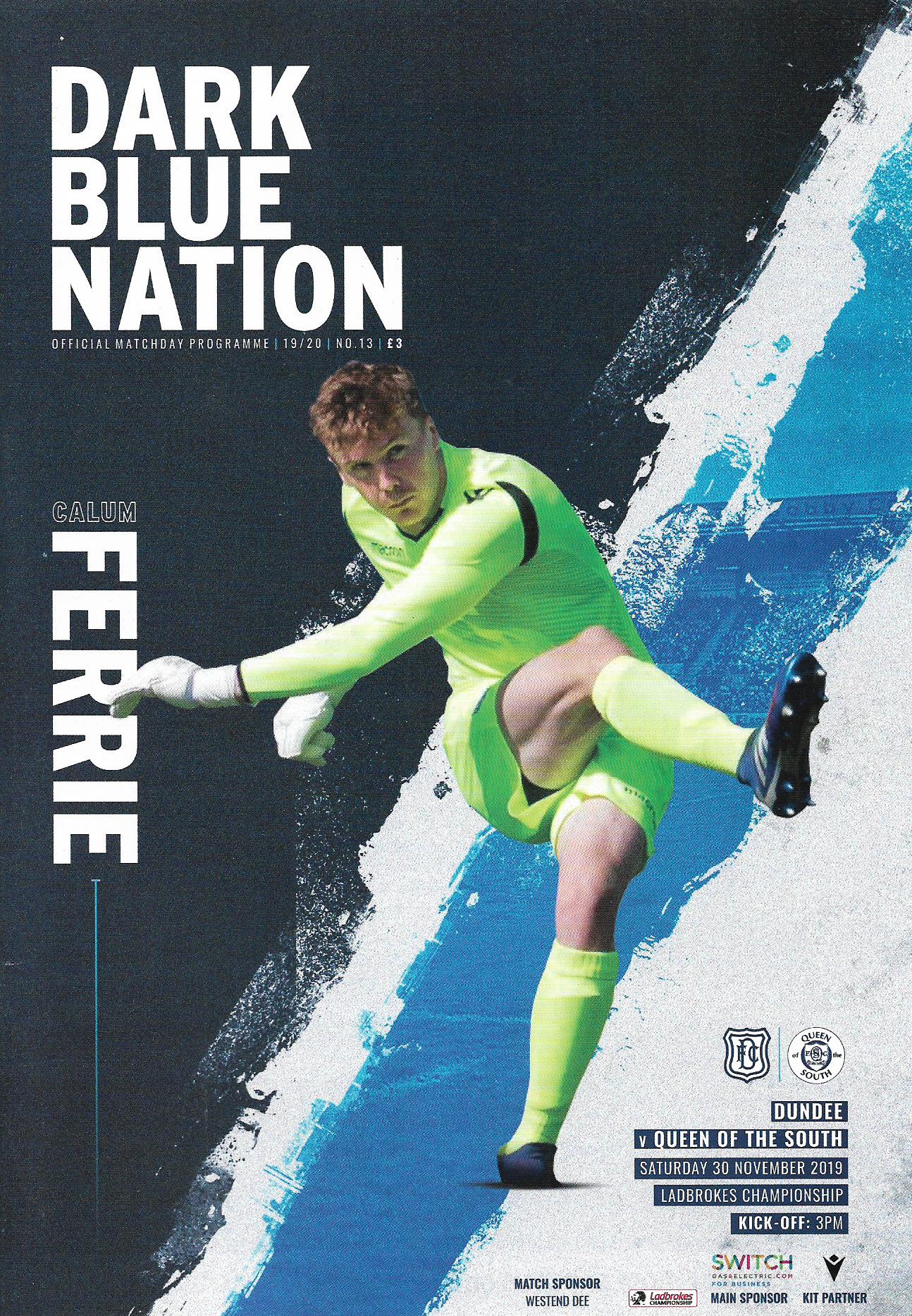 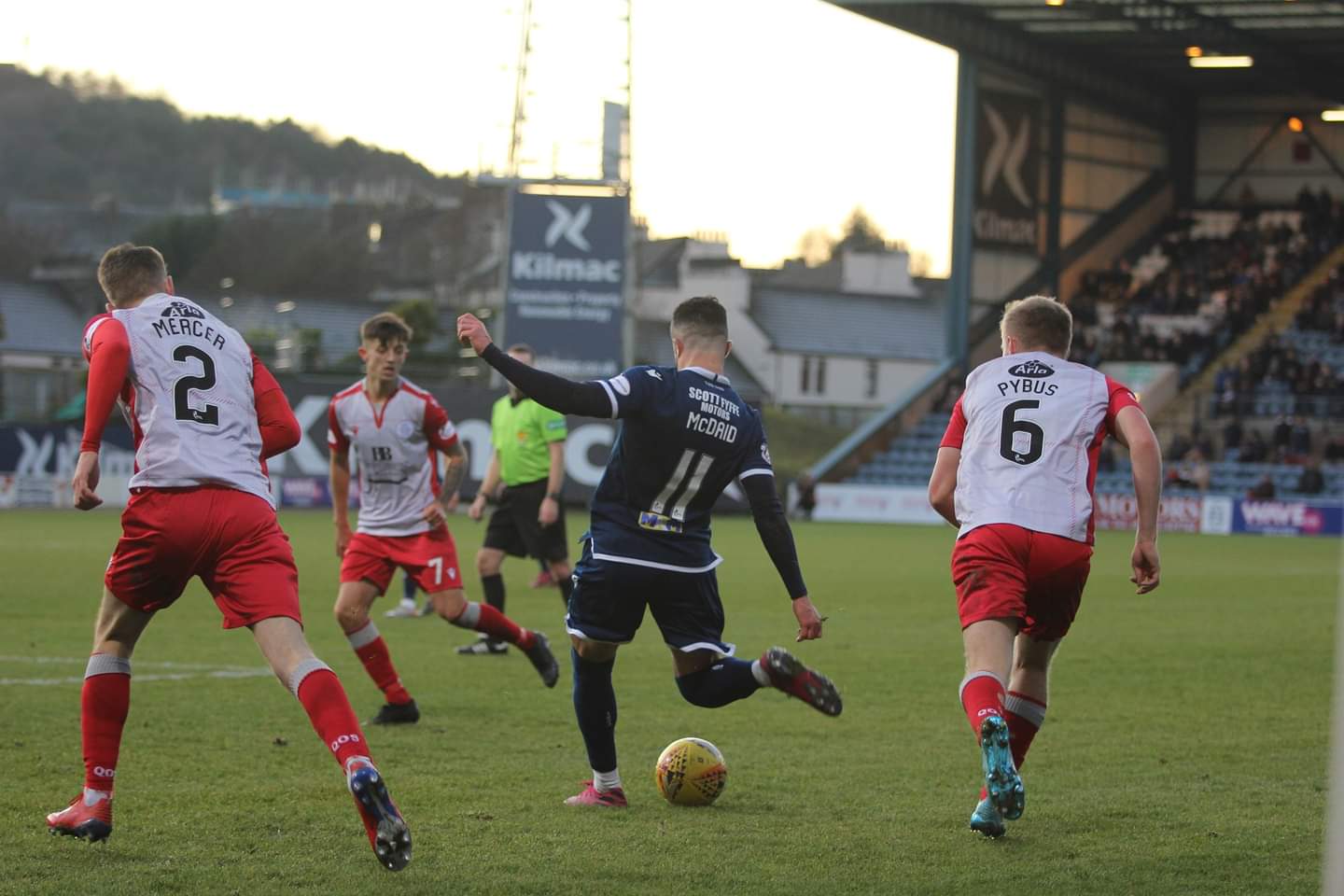 Two goals by Stephen Dobbie gave Queen of the South a 2-1 win at the Kilmac Stadium at Dens Park this afternoon. Dundee had started well only for Dobbie to put the Doonhamers ahead after half an hour. Queens should have extended their lead in a poor second half. Danny Johnson seemed to have salvaged a point with a fine equaliser deep into injury time, but the defence switched off to gift Dobbie an immediate winner.

The Dark Blues made four changes from the trip to Inverness. Jack Hamilton returned from injury, replacing Connor Hazard who has returned to Celtic. Josh Todd and Cammy Kerr kept their places after coming off the bench last week, and Finlay Robertson came in. Josh Meekings and Paul McGowan were unavailable, and Shaun Byrne moved onto the bench. Queens line-up had three changes with Lee Kilday, Abdul Osman and Faissal El Bakhtaoui coming in for Andrew McCarthy, Lewis Kidd and Gary Oliver.

The Dee came flying at Queens from the start and had the away defence in trouble twice in the first minute with dangerous crosses from Cammy Kerr and Declan McDaid.

A scramble in Queens’ penalty area ended with McDaid’s shot being deflected wide. The first 10 minutes were all Dundee, but the Doonhamers then started to emerge from their shell. Twice they put in dangerous crosses. Jack Hamilton did well to take the first and the second flew through the goalmouth with no takers.

Dundee continued to dominate possession, but the visitors looked menacing when they broke out from defence. Hamilton did well to turn away Stephen Dobbie’s fierce angled drive at the end of one break.

The Dark Blues were playing some neat football in the middle third, but couldn’t turn that into crosses or passes that could open up the Doonhamers’ defence.

After 28 minutes the Doonhamers took the lead with a fine individual goal from DOBBIE, who made space skillfully before scoring with a low drive from 18 yards.

Dundee kept on plugging away without finding a key to open up Queens, who came closest to the next goal. Faissal El Bakhtaoui shot straight at Hamilton after another breakaway, and Hamilton had to parry a Darren Brownlie volley from a corner.

Almost on the stroke of half time the Dark Blues lost Jamie Ness, who limped off to be replaced by Danny Johnson.

In a desperately disappointing second half the Dark Blues could recover none of the fluency and urgency they had shown in the opening stages. The two strikers saw little of the ball as the midfield were often overrun and struggled to create anything as they approached the final third.

The only one worthwhile chance fell to Kane Hemmings, who took a cross on the volley from 10 yards. Robbie McRorie partially stopped the shot and recovered quickly to grab the ball on the goal line.

Dundee’s confidence had drained away when Queens took the lead and in the last half hour struggled to build any moves or to worry the Doonhamers’ defence. Connor Murray went close with a dipping shot from 25 yards after the Dee defence misjudged a high ball. Queens should have made the points safe long before the end, but twice Dobbie took too long with good chances and was denied by desperate late blocks by Jordon Forster. El Bakhtaoui tried to emulate his memorable derby goal in the Leage Cup, but Hamilton reacted well to touch the ball wide.

Queens looked far too comfortable as the clock wound down. The game was slipping away from the Dee, who seemed certain to go down tamely to defeat. Two minutes into injury time, however, they delighted the exasperated fans by conjuring up a fine equaliser.

Jordan McGhee burst forward, allowing Danny JOHNSON to take the ball on the edge of the penalty area, turn and fire a superb shot into the top corner. There was still time for one more goal, but any faint dreams that the Dee might snatch an improbable win were crushed when the winner came immediately at the other end.

With the team’s thoughts on attack rather than defence Jordon Forster lost possession, allowing Stephen DOBBIE to run clear on goal. Hamilton got a hand to his shot but couldn’t stop it bouncing over the line. It was a dreadful way to concede all the points.

The Dark Blues did play some exciting football at the start of the match, but that counts for nothing without any consistency or end product. In their current run of poor form Dundee have to score first. After a promising opening half hour it shouldn’t have been a disaster for the Dark Blues when the Doonhamers went ahead. That goal not only gave Queens the lead, it also gave them a massive mental edge over the Dee; the only surprise was the strange manner of their victory rather than the win itself.

Good afternoon and welcome to the Kilmac Stadium at Dens Park for today's match against Queen of the South.

I'd like to start by welcoming Allan and his backroom staff along to the match.

The game at Inverness last week was really frustrating. I have watched it back a couple of times now and there was nothing in the game.

You get a lot of games like that in this league. You get chances like the one for Kane that was blocked and if that goes in then you think we are coming out in the second half and having a right go.

It's all ifs and buts. I think we had lots of ball but not in the right areas and we didn't work their goalkeeper nearly enough.

That is frustrating for us. We had spoken about the lack of chances we were creating at the start of the season but we changed and became a team that created lots and were very good going forward

That was lost on us on Saturday a little bit. As a staff, we are working hard to get it back.

I won't fault the players for effort because they gave me everything. It wasn't down to that and I don't think there has been any game when I have had to question it.

Finally, I'd like to thank the supporters who made the journey last week. The backing as always was fantastic and we are looking to find that consistency starting today.