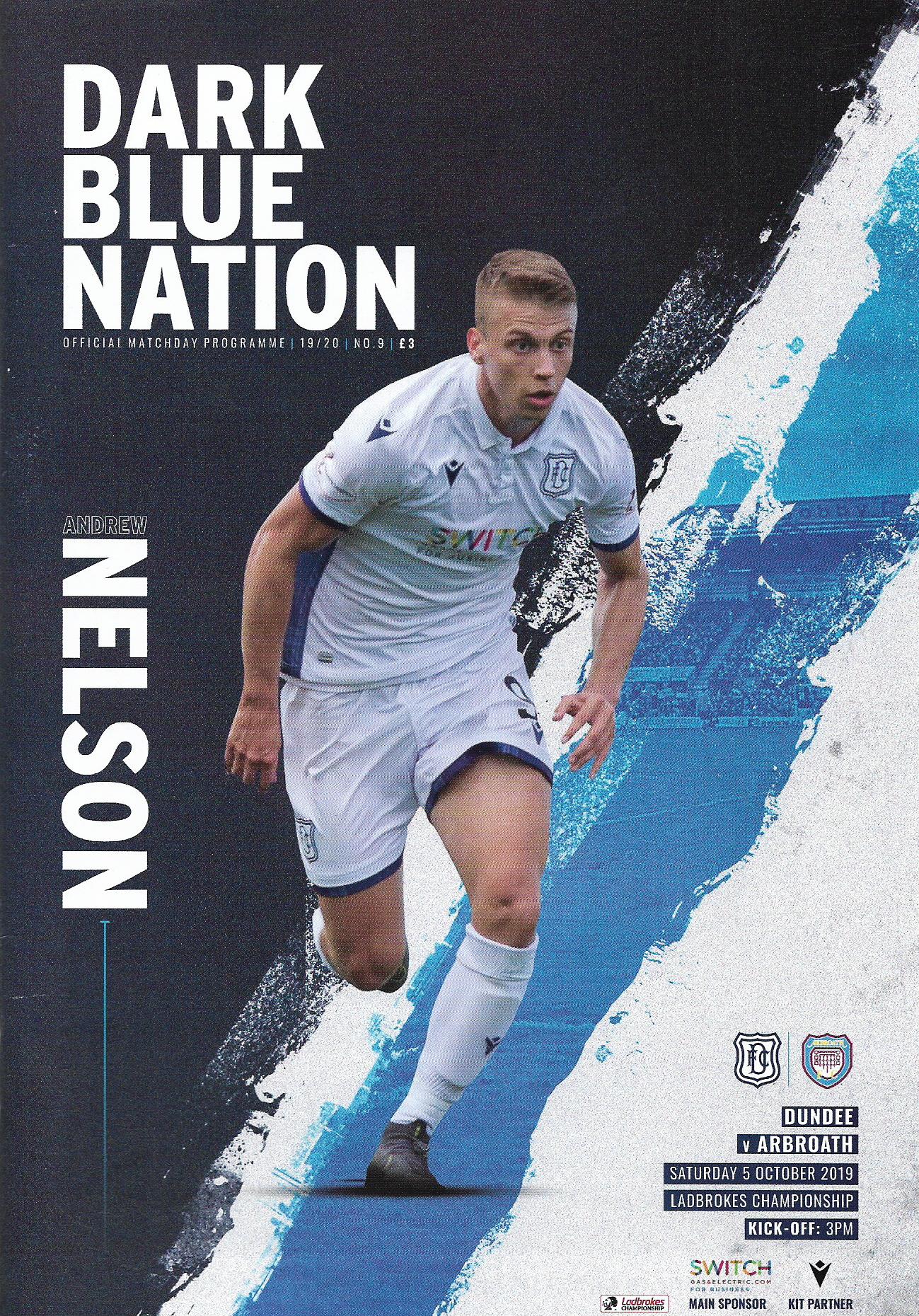 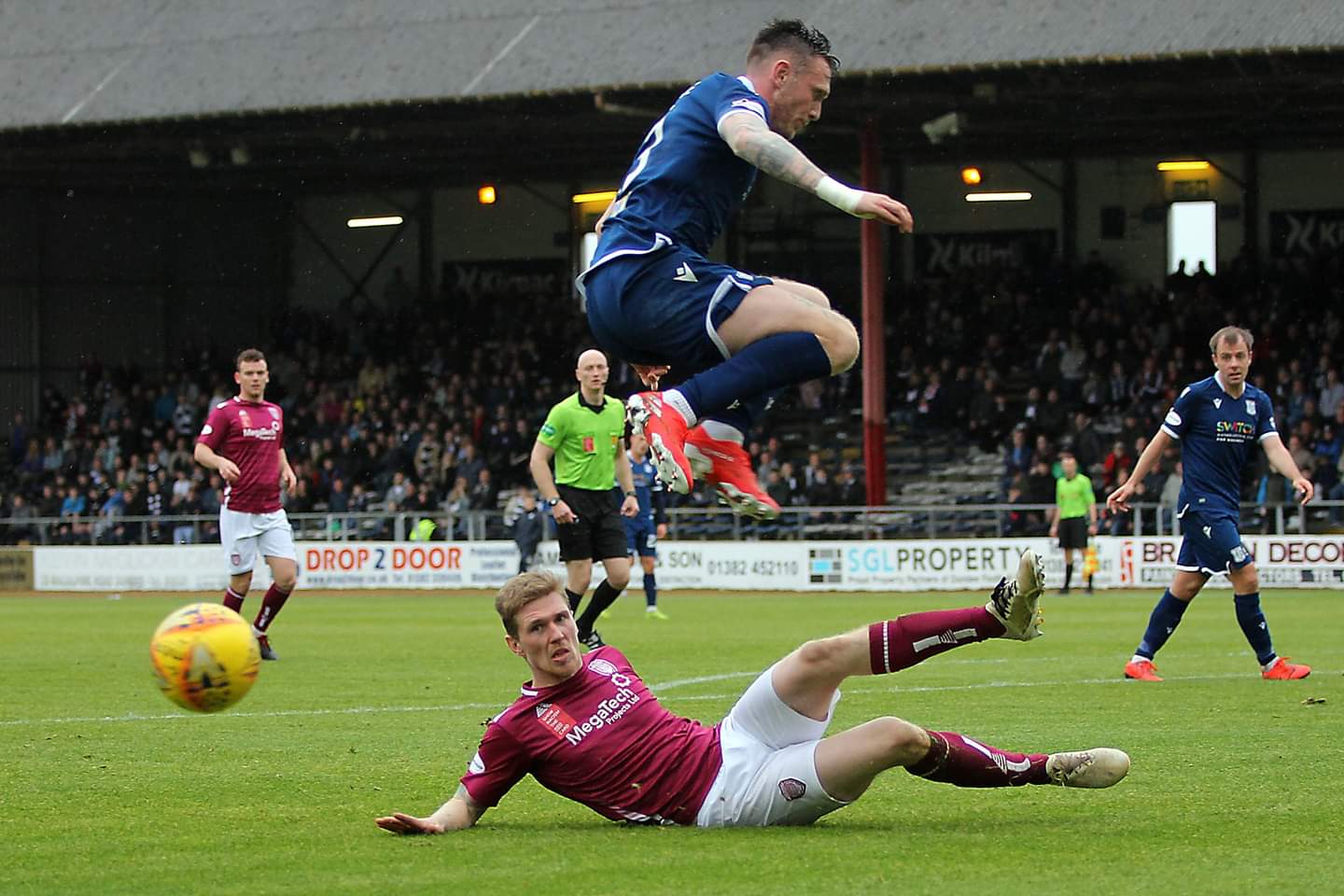 Fine goals in each half by Declan McDaid gave the Dark Blues a 2-0 win over Arbroath at the Kilmac Stadium at Dens Park. A battling performance by the Lichties made it a tough afternoon but the patient Dark Blues had the quality and composure in midfield to control the game and were well worth their win.

After a slow start the Dark Blues had the first shot when Graham Dorrans fired over from just inside the penalty area at the end of a neat move. The Lichties went much closer when Steven Doris took the ball off Josh Meekings with a thumping tackle, bundled his way past Dorrans then saw his deflected shot bobble past Jack Hamilton’s far post. David Gold had another go, shooting wide from 18 yards after picking up the scraps from a Doris challenge.

After those scares the Dark Blues settled down to take control and gradually wind up the pressure on Arbroath’s defence. Paul McGowan had a header saved by Derek Gaston at full stretch. A dangerous Jordan Marshall cross took a couple of deflections before pinging off Kane Hemmings’ head and flying wide.

Unlike recent matches Dundee were consistently playing men into dangerous wide positions. A Declan McDaid cutback arrived perfectly for McGowan, but his 12 yard shot was blocked. On the other side a fast, one touch passing move ended with Marshall’s low cross being turned desperately over his own bar by Ricky Little. Hemmings’ header from the corner was saved by Gaston.

Jordon Forster played McDaid into space on the right, but again the low cross was cleared. Lichties’ keeper Gaston had to race from goal to beat Hemmings to a Jordan McGhee cross as the Dee kept up the pressure.

Finally, after 38 minutes the opening goal arrived and it was a cracker. Declan MCDAID took a short pass from Dorrans 25 yards from goal and smashed a lovely low shot off the post and into the net – his first goal for the Dee.

McDaid came close to a second when Dorrans and McGhee worked a clever free kick but his shot deflected off a defender and wide. Hemmings almost scored a memorable second, when his overhead kick from Marshall’s cross screamed a foot over the bar.

After the break Dundee resumed control and continually threatened to extend their lead, patiently probing for a second goal. The movement and passing stretched Arbroath’s defence, though the Dark Blues maybe let themselves down with some over-elaborate play in the penalty area.

Just before the hour Hemmings skillfully controlled the ball and played McDaid in, only for Gaston to save with his feet at the expense of a corner. Instead of hoisting the ball into the goalmouth McDaid played it short to McGowan, who shaped to cross but instead back-heeled a pass for MCDAID to run in and score with a superb, curling shot across goal and inside the far post. This was the first time in 2019 that the Dee had been two goals ahead in a league game.

Arbroath reacted well and threw everything at the Dee. Ben Stirling tried to emulate McDaid’s first goal, but from the same position he hit the post, with Forster blocking the attempted follow up. The next few minutes were the most difficult the Dee defence had to endure all afternoon as Arbroath fired in a series of corners that produced some worrying scrambles.

After navigating their way out of that storm Dundee went on to take charge once again and see out the game comfortably. They weren’t unsettled even by two worrying injuries in rapid succession that forced substitutions. First Marshall limped off the park and then Byrne took a painful kick in the torso that put him out of the game. Josh Todd and Fin Robertson came on, Sean Mackie moved to left back, and to the players’ credit they resumed their domination.

The Lichties tried hard to pull a goal back but pushing men forward just freed up space for the Dee without posing any real threat to Jack Hamilton’s goal in the later stages. Dundee should really have added a third goal, but were sometimes guilty of trying to walk the ball into the net. McDaid had a half chance for his hat trick after McGhee burst forward, but didn’t get quite enough power or power in his shot. Another good move ended with Hemmings trying to tee up Todd when he might have done better to have a go himself.

This was a much better Dark Blues performance than we’ve seen in the last two games. The passing and movement were sharper with more penetrating attacking passes from the midfield. Graham Dorrans conducted affairs impressively from the centre of the park. The wide players, including both full backs, worked like Trojans to get into space although perhaps there should have been more clear chances flowing from all the good play out wide. Aside from a couple of moments when the defence rode its luck they did very well and earned their clean sheet. There is still room for improvement, but there were many promising signs and those delightful goals by Declan McDaid gave the fans something to smile about on the way home.

Good afternoon and welcome along to the Kilmac Stadium at Dens Park Stadium for today's match.

Welcome to Dick Campbell, his backroom staff and both sets of supporters.

We dominated large spells with the ball but the problem was in the final third.

There have been improvements in the performances in recent weeks in that we are creating more chances but ultimately they need to start going in the net and we need to start picking up three points.

It just hasn't clicked in front of goal in recent weeks. It is taking time and I knew it would never be an overnight thing. It's about us finding a way to make the team click and we fully believe in the squad and the quality that we have brought to the club over the summer.

We have continued to work tirelessly throughout the latest spell of the season and I have confidence that we will get things right.

As frustrating as it has been at times I can't fault the players effort or the backing from all the fans so that's why I'm so confident we will have a successful season.

Today is another tough match. I watched Arbroath recently against Partick Thistle and they showed in that match that they are a tough team to play against and again we will have to be at our best this afternoon to get the win we are after.