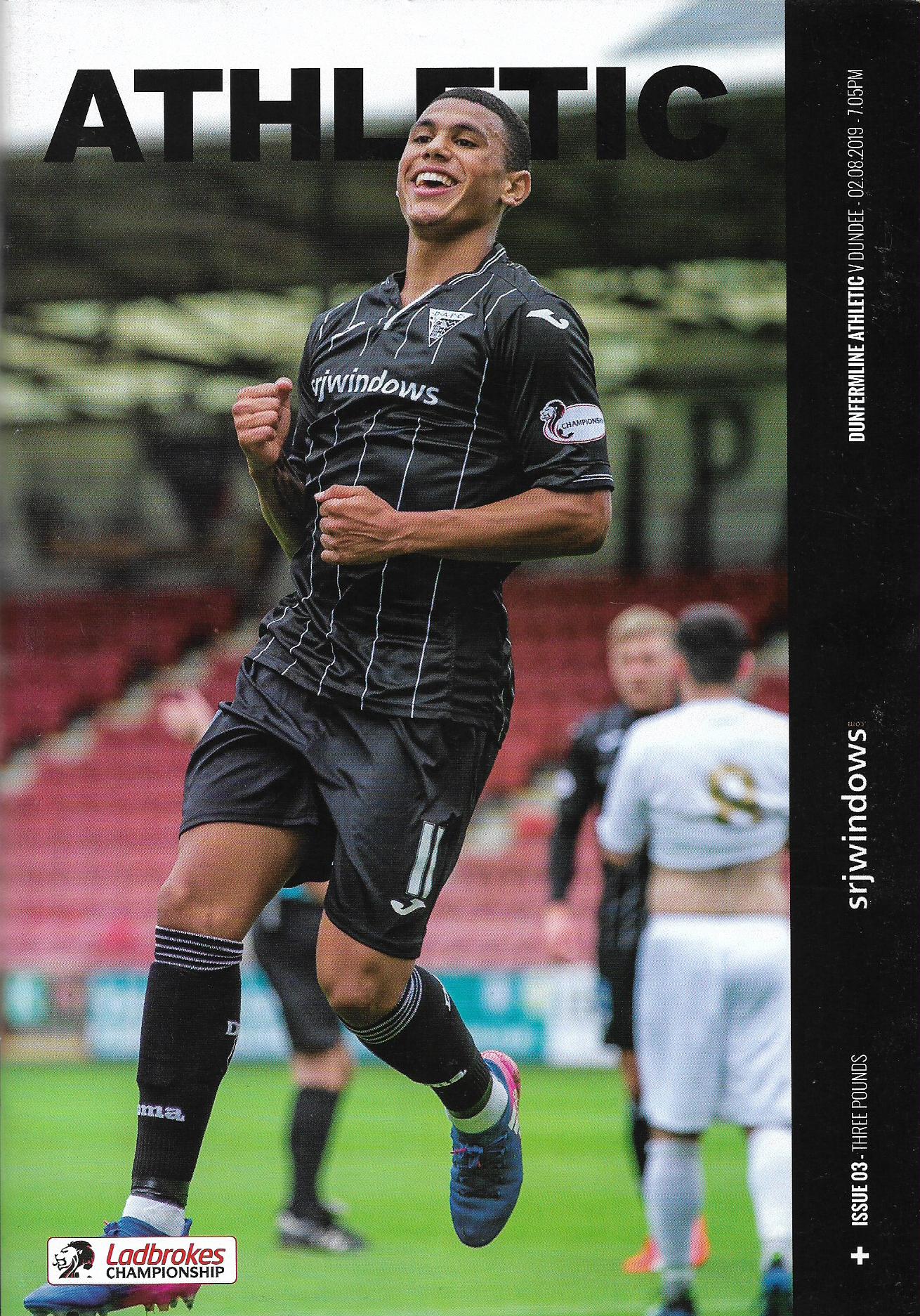 Dundee and Dunfermline played out a thrilling 2-2 draw to open the Championship season at East End Park. The Pars raced to a deserved two goal lead through Ryan Dow and Kevin Nisbet in a first half in which they were outstanding. The Dee were relieved to reach the interval only one goal behind when Danny Johnson converted a penalty right at the end of the half. The Dark Blues reorganised and dominated the second half, but needed a second Johnson penalty to rescue a point.

Not only did James McPake choose exactly the same team that beat Inverness on Sunday, the substitutes bench was also unchanged. The Pars only change was Lewis McCann replacing the suspended Kyle Turner.

The Pars started much the livelier side putting the Dee under pressure from the first minute. Dundee did have the first chance when Josh Meekings was unmarked at a free kick and Ryan Scully did very well to push his powerful header over the bar.

However, that was a rare pause in Dunfermline’s early dominance. The Pars were pressing effectively in midfield and making good diagonal runs in behind the wider Dee centre backs to exploit space behind the wing backs. The tactic worked repeatedly during an uncomfortable first half.

The opening goal after 12 minutes was hardly unexpected, but the way Dundee’s defence fell apart certainly was a surprise after being so tight in the Betfred Cup. Cammy Kerr’s slack back pass down the wing put Jordon Forster under pressure. He stumbled and lost the ball to Kevin Nisbet, who ran on and set up the unmarked Ryan DOW to shoot past Jack Hamilton from 12 yards.

Dunfermline went on to keep the Dee defence on the rack, working hard and always finding space in the wide areas. Dundee had the occasional moment of fleeting promise coming forward but with no hint of reward against the Pars’ defence.

Dow had Dundee in trouble again with a clever run in from the left, but his pass was wayward and the Dee cleared. The Pars were worth a second goal and it came after 34 minutes in a worryingly simple manner.

Comrie and Dow worked a straightforward throw in on the right, allowing Dow to send over a perfect cross from the byline for Kevin NISBET to nod the ball past Hamilton.

A dreadful first half could have become a nightmare but the woodwork recued the Dee when Nisbet muscled Meekings off the ball and curled his shot round Hamilton and off the crossbar. Coley followed up but blazed his shot high and wide.

Dundee needed to reach the break and reorganise, but received a huge boost when Dow carelessly allowed Kerr’s deep cross into the penalty area to bounce against his arm. Danny JOHNSON duly smashed home the spot kick with the last kick of the first half.

James McPake reshaped the team at half time, switching to a 4-2-3-1 formation. Josh Meekings and Andrew Nelson were sacrificed, being replaced by Declan McDaid and Josh Todd. Dundee had to withstand some early pressure from the Pars in the first few minutes of the half but then they took charge with the new shape and substitutes closing off the space at the back and allowing the midfielders to control the game.

Dundee now started to hold onto the ball. Second half captain Paul McGowan, Fin Robertson and Shaun Byrne were making penetrating passes and suddenly the Pars had fallen out of the game. Nisbet went close with a long range cross shot that flew past Hamilton’s right hand post, but the Pars were now restricted to trying to hit the Dee on the break. Ryan Dow had a fine first half when he was a constance menace to the Dee, but fell out of the game in the second half when he hardly saw the ball.

A smart Dee move was ended by Aschroft pulling back Todd as the Dee substitute was bursting clear on the edge of the penalty area. But for all Dundee’s pressure they couldn’t open up the Pars.

Finally, after 74 minutes Dundee were awarded a second penalty. A fine move through the midfield ended with McDaid running at the defence and playing Johnson in. He was taken down by Ashcroft before he could shoot and referee Mr Aitken again pointed to the spot. JOHNSON confidently scored again.

The last 15 minutes were all Dundee but they couldn’t force a winner, which in truth they would hardly have deserved over the full match. Jordan McGhee went very close with a 20 yard volley, and the Pars hung on.

Both teams will look back on this match ruefully and wonder what might have happened if only, if only… Dundee responded very well to the way that the Pars outplayed them in the first half. The tactical switch transformed the game and once the Dee equalised there looked like only one possible winner.

The less said about the first half the better. Dundee’s three at the back simply couldn’t handle the Pars movement and running. The change to a back four and an extra man in the midfield allowed Dundee’s passing midfielders to control the the second half. The two substitutes, Todd and McDaid made a huge contribution to the transformation and helped keep the Pars pinned back in their own half.

This was a tough first game for the Dee in the Championship and it was a reminder how difficult and competitive this division will be. The Dark Blues will have to play consistently at the level they showed in the second half. But please, no more displays like that first half performance!