Footballers in the West of Scotland had on Saturday an opportunity of seeing what Dundee men could do on the football field.

The Dundonians have already drawn with the Rangers and although they succumbed to the Celtic, Renton were defeated at Ibrox last Saturday, and the play on Saturday thus gained increased interest. The teams were strongly represented, and both looked well when they stepped on to the turf.

Dundee made a very favourable impression by the play at the start. The forwards showed right at the start that they knew something more than the elements of combination, and the halves and backs linked without fear. Renton played hard for the first point, and were Indeed unlucky in this respect: with caution they might have succeeded.

Dundee kicked off against a slight breeze, and ran the ball down and past the goal. Bell the next minute missed it. At the other end, Renton looked as if they would hold the advantage, but by smart back play they were driven off, and a rush on Wilson was next cleverly checked by McQuilkie. McCall and McNee had now a fine run down on the left, but McKie at goal caught the ball just in time. Renton had numerous opportunities to score, all of which, however, were nullified. Taking advantage of a little slack play on the part of the home team, Dundee, with a forward run, put on their first goal - against the wind, too -in fifteen minutes.

This did not take well with the local spectators. Renton followed up this with a slight pressure on the Dundee goal, and it was a wonder that McKie kept his post intact. A corner for Renton proved of no avail, and the visitors throwing off Renton, marched through the backs and half-backs towards their opponents goal.
Loose work as goal was spoiling the home men's chance - they were shooting carelessly and wild. Renton again returned, and kept McKie and his colleagues in front of him busy.

McKie, by his splendid custodianship, established himself a big favourite, and was repeatedly cheered. Craig, at half back, also got through a lot of hard work. Several times Renton appears to be on the point of equalising, but every Dundee man worked his hardest to prevent this.

After many attempts, Fleming, from a corner, got the ball on his head, and, amid loud cheering, got the necessary point for Renton. With the wind, Renton were having the best of it. In no time Ferrier and Mcki upon to save. Struggling up, Dundee got in, and Reid scored another for his team. Half-time:- Dundee, 2: Renton, 1.

Renton commenced the second half with great determination, and several times looked like equalising. This was not to be yet. Dundee gradually worked down on Wilson, and Renton were forced to beat a hasty and disordered retreat, being taken by surprise.

Wilson, however, stood them well and cleverly cleared a dangerous shot from Gilligan. Returning to the visitors' end, Renton continued the play with determination, and a scrimmage took place which resulted in Reid giving his team a majority of 3 goals to 1.

Renton went at it again, and play was very much confined to the Dundee end, the Renton men playing a dashing game.

J. M'Call scored Renton's second goal. Dundee made no further headway against the Renton defence, and as the game drew near a close, considerable excitement prevailed. Both sides made great efforts to score again, but neither managed to do so, the game ending - Dundee, 3 goals Renton, 2 goals. 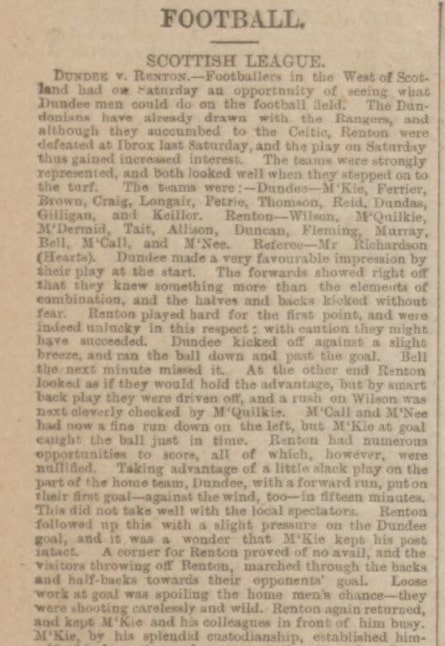