Newspaper extract from The Evening Telegraph/Newspaper clipping The Scottish Referee.

Eight goals in a League match at Dens Park!

Dundee's supporters had their goal scoring appetites satiated on Saturday, when Queen's Park filled the opposition.

Heavy showers of rain before the game made the ground soft and slippery, but a surprise exhibition of football was in store for fairly Large crowd.

The footwork of both teams in the first half was very pretty and the period proved a "scorcher," being the most exciting since Celtic's visit.

The second half was much slower, but the pace was good considering the sloppy pitch. There was consequently much floundering in the mud, and promising movements were nipped in the bud by players slipping.

Right from the commencement Dundee set about their work in the proper manner, and once they scored could not be kept out. The Queen's were lamentably weak in front of goal, so weak, in fact, that the only decent shot from their side was sent in by R. S. McColl, and it proved successful, the goal being the first scored by the amateurs at Dens Park.

But Dundee ere this had secured six goals, and thereby bangs a tale. J. P. McGill, the old popular Dundee Violet junior, took up his stand between the sticks for Queen's Park, and at the start cleared nicely. Then MacFarlane opened the scoring against him, Langlands bounced in and knocked him over, and it was all up.

McGill was quite unnerved after that, and could not be expected to do justice to himself. It was a hard trial, though he bore up well, and towards the end of the game saved thrice in clever style. He was suffering great pain in the first half from the effects of the knocks he received, but remained pluckily to his post.

What a scintillation this was from the Dundee shooting stars. Macfarlane had three goals to himself, as also did Hunter, and Bellamy scored one.

The Queen's half-back line got a huge amount of work to do, and, led on by Arthur Murray, they performed most creditably, though the home forwards were their masters for the bigger portion of the game.

Only occasionally did Queen's do the long swinging game on the spongy turf, and they played it oftener and better than Dundee, who for once came off with their close-passing game. It would seem that the home halves are mainly responsible for the playing of the billiard-table style. Not one of them tried to open out the game on Saturday except Dainty, who once or twice punted ahead to Hunter

Dundee's forwards were on their game. Bellamy indulged in dodging play to good effect, and gave plenty of opportunity to his comrades. But, alas! he was left severely alone by them when it came to their turn, and often was standing unmarked and in an excellent position.

Langlands has not struck his Celtic form, although he was a trier all the time. Hunter played well, but was unnecessarily loth to part with the leather. MacFarlane shot and passed finely, and gave very opportunity to Cooper.

The outside left did well, showing an excellent turn of speed, and a capability of launching the leather into goalmouth.

The halves were all right, Lee getting a prodigious amount of work to do in his watch over McColl and Paul. Lawson was nippy. while Chaplin showed improved form. Crumley saved beautifully all through.

Fletcher and Richmond had a hard time of it in the Queen's defence, Richmond especially showing up well.

Murray was about the best of the halves, though McAndrew played sturdily against Macfarlane and Cooper. The left wing was the strongest part of the forward line, and most of the danger came from it. McColl's brilliant individual effort and goal was reminiscent of other days.

Leckie was well watched by Dainty, and did not get much rope. McLean and Bowie were just so-so. The drawings amounted to £175- £140 at the turnstiles and £35 at the stands, 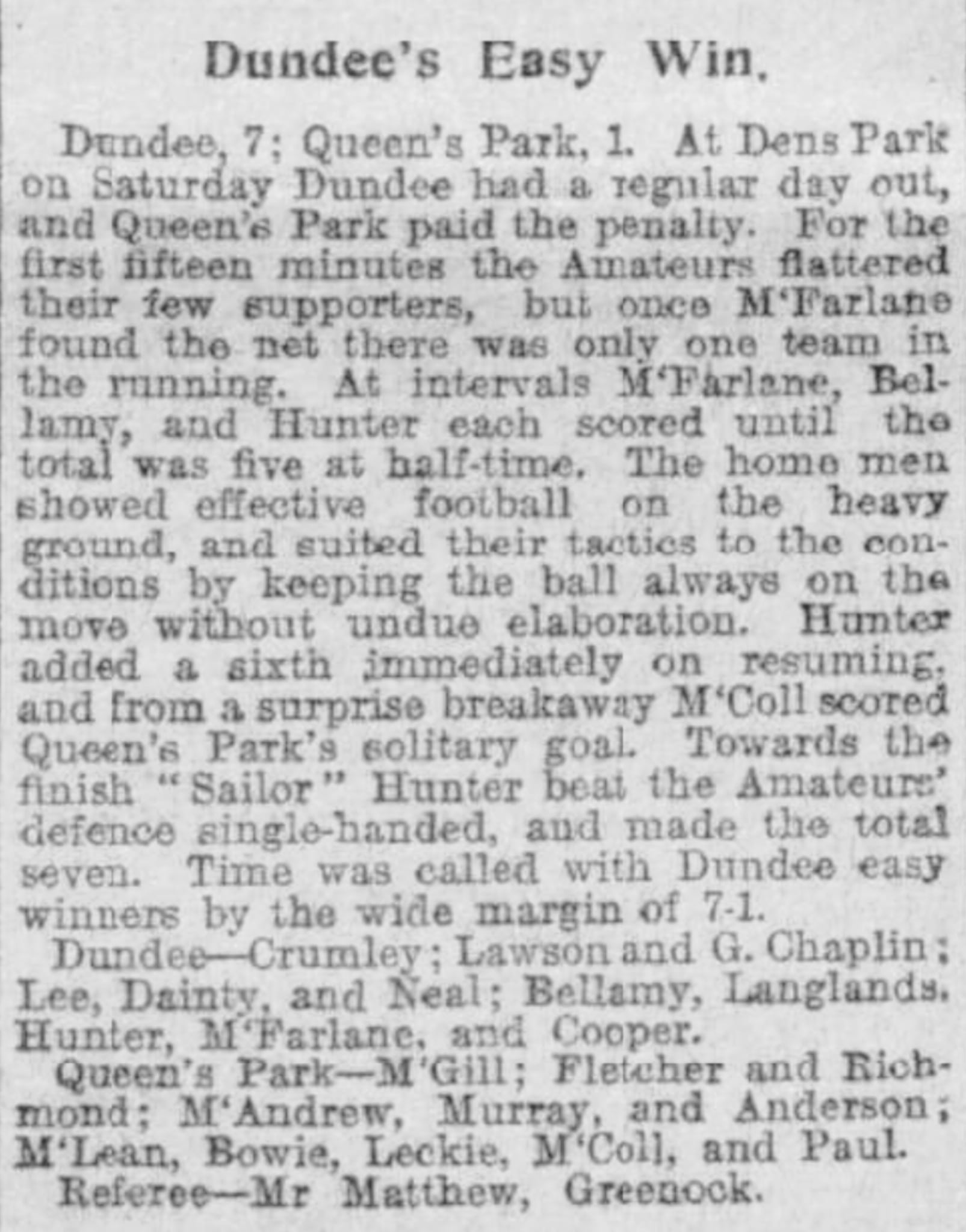