The match between the famous Celtic team and the recently formed Dundee combination on West Craigie Park in the Scottish League competition on Saturday was one of the biggest football events ever fallen in Dundee.

The odds, of course, were in favour of the Glasgow eleven, whose brilliant record almost forbade the possibility of defeat, but all the same there was the certainty of a display such as is not witnessed many times in the year north of the Tay.

Absence of counter attraction of a kindred nature cleared the way for a monitra gate, and what could not have been far short of 9000 people - a number never exceed, if indeed equalled, on a Dundee football field tabled down the six penny fare.

The rush for places, in fact, was phenomenal, and only very early comers could get near the ropes. The grandstand was occupied by aboat 1000 spectators, and the main accommodation was crammed to its greatest capacity, but the banking of the ground enabled nearly all to view the fray with comfort.

The heat wave of the past week was undiminished, and but a small breath of wind now and then tempered the atmosphere.

Dundee appeared up to time, but the late arrival of Kelly delayed the start some twenty minutes, in the course of which one or two skirmishes between excited enthusiasts engaged the attention of the crowd. When, amid cheering, all the players were on the field, it was seeb that each combination had undergone a change as contrasted with their prior composition. Dundee was represented by the following eleven, the alteration from the previous Saturday day's team being the appearance of Graham in place of Craik: - McKie: Ferrier and Brown; Craig, Longair, and Petrie; Thompson, Graham, Dundas, Gilligan, and Keillor.

The absence of Madden, who was feeling out of form, and substitution of Davidson in the front rank, left the Celtic as follows:-Callen; Reynolds and T. Dunbar; Curran, Kelly, and Byrne: Davidson, Blessington, McMahon, Campbell, and Cassidy.

Dundee appeared in white Jerseys on account of the similarity of their ordinary toggery to that worn by the Celtic, and the visitors were in their distinctive green stripes. The Celtic centre started the ball, and for the fist minute it was confined to Dundee territory. But only for brief space, for the ground men got away. Thomson, Gilligan, and Keillor made good attempts, but in each case the kicking was abortive.

Returning to the aggressive, the Celts gave a brilliant exhibition, and the local custodian was twice called out to save, which he did in capital style. Fortune again favoured Dundee, and, backing it with hard work, several corners fell to them in rapid succession. They were undoubtedly doing some very good things, but Cullen's magnificent powers at goal were equal to all advances, and beautiful shots from Thomson and Keillor were repelled in smart fashion. Something that showed that the Celts could do followed.

Carrying the leather south they defied all efforts of their opponents to relieve the presure, and when about thirty minutes of the game had gone a shot from the right steuck M'Kie's foot and went through the posts. Five minutes later Cassidy counted a second with a flying shot, and the superiority of the Celts, if anyona doubt it, was established.

While the visitors continued to hold their own, and more sometimes, Dundee had a few looks in, Keillor, notably, making some worthy efforts, but they were unable to pierce the defence.

Half time was reached with the standing Celtic 2: Dundee 0.

The ground players started wall in the second period, and came near to scoring a point, but still they were unsuccessful. The Celts resumed the attack, and twice Cassidy essayed a goal, though, on account of McKie, without fruitful result. Ultimately, however, McMahon got onto the ball and the rush north ended in a splendid third goal.

Dundee responded with a well-sustained effort to reduce leeway. Keillor, Thomson, and Longair were prominent in the attack, and had really hard lines. Again and again they were within an ace of scoring, but some erratic shooting and the strength of the opposing hacks delayed the wished for result.

At Last Longair defeated Cullen with an admirable negotiate header, and Dundee's first goal was registered.

About this time some disapprobation was manifested among the spectators and the tactics of certain of the strangers, against whom quite a number of free kicks were awarded. Retaliating after their majority had been reduced, the Celts fairly outplayed their opponents, and manipulating the ball in a way that bewildered them, they once more stood ahead by three goals.

Dundee did not relax their efforts, but they could not increase their total, and the match ended - Celtic 4: Dundee: 1.

Judged by Saturday's play, the superiority of the Celts was plainly evident. Cool, calculating, and trained to almost anything, they excelled in the most difficult situations, and when an intricate piece of work was on hand, they knew just exactly the thing to do.

Dundee played fast and gamely, and, if defeated, they were far from being discredited. On the other hand, they showed a pluck and dash of the most praiseworthy character.

Their deficiency, when compared with a team like the Celtics, lay in the lack of such a large ability in the finer, scientific phases of the game. 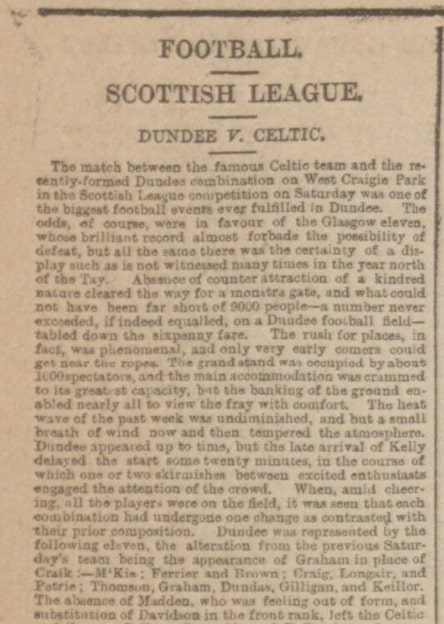