The football season in Dundee has made a most, auspicious opening, and there can be no doubt whether that the inclusion of a local team in the Scottish Football League will give a powerful impetus to the game in the city.

It is of course too early to anticipate the appearance the new combination may make in the national tournament, in the course of which it will be pitted against all the crack clubs of Scotland, but its initial performance gives its supporters every confidence.

The first fixture was on West Craigie Park, when the Glasgow Rangers had to be faced. A meeting with the famous light blues gave assurance that the local men would be required to show what they could do, and, not withstanding an advance in the rates of admission, there was a very large attendance of spectators.

The teams having been photographed, the strangers started the ball downhill, and at once made an invasion. Brown headed out, and the Dundee right wing transferred the scene of operations. Thomson beat McCreadie and passed across to Gilligan, who made a good attempt, but Haddow was all there, and cleverly cleared his charge. The Dundee men were inclined to hang too much on the ball, and the strangers, with a well-combined rush, were down upon McKie, and the saves the latter made were enough to make a reputation for that player. The home team broke away, and Dundas just missed scoring.

Still pressing, the leather was sent across the Rangers' goal, and Keiller banged it through. The goal, to the disgust of the spectators, was ruled off-side, and the Rangers, making an effort, Longair failed to check the rush, and, through a misunderstanding with Ferrier, McKie allowed a soft one to go through from the foot of Gray. This was followed by a smart piece of work by Barker, who, with fine judgment, passed to Gray, and the latter sent in a scorcher that nothing could stop. Two goals in five minutes looked as though the strangers were going to pile it on, while there was a sad lack of combination in the local ranks.

At last Gilligan managed to pierce the strong defence offered by the Western men, and had hard lines. Dundee still pressed, and from a shot by Dundas, Gilligan headed through. Fast play in midfield followed, but the Rangers passing from wing to wing Gray was once more on the spot and notched a third goal for his side, and nothing more was done up to the time the whistle sounded.

On resuming the Rangers forced the pace, but the tricky Dundee left wing beat all their efforts, and Haddow made a narrow save. Dundee played hard, and showed the better combination, but were very loose in front of goal.

The Glasgow men occasionally broke away, and a hot scrimmage took place in front of the Dundee posts, but Petrie removed all danger, and Keller had a fine run down. The shot was entrusted to Gilligan, but the ball rebounded from the upright. Play was now mostly in front of the Rangers stronghold, but the defence was most stubborn, Smith in particular putting in much hard work. After fast play in midfield, Thomson, beating Mitchell and Drummond, sent the ball across to Keillor, who promptly scored.

Encouraged by this success, the Dundee men did all they knew, and after a clever bit of play, in which all the front line had a share, the ball was forced through. The spectators wear now frantic with excitement, and both teams played with great dash in the endeavour to score the winning point, but no further scoring resulted, and the match ended in a draw, the scores being - Dundee, 3: Glasgow Rangers, 3.

The match was one of the most interesting witnessed in Dundee.

Despite the trying heat, it was fast from start to finiah, and a deal of clever play was shown. There can be no question that the local men had the most of the game, and it was in front of goal that they failed most. The front row of the Rangers did not show to great advantage, Gray failing to keep his men together. The Dundee men showed themselves cleverest on the ball, but dodging tactics against speedy opponents does not pay, and less individual work is to be desired. As it is the Dundee team is to be congratulated on the good account it has given of itself in its first League match.

Writing in reference to the match, a correspondent says "It will be remembered that at the end of last season football in Dundee was at such a low ebb that it was considered something startling would have to be done to again raise the enthusiasm for the game. Delegates from the two oldest clubs in the shire, viz., East End and Our Boys, met and agreed if admission could be got to the Scottish league they would join hands, and make one strong combination from both clubs. Their application was successful, and Saturday saw a new era in Dundee football, for, instead of having a Glasgow combination at the end of the season, the full strength of these elevens will appear on West Craigie Park during the season.

Saturday's opening was auspicious. The Glasgow Rangers being well known over the whole world, opened the new clubs ground and season. It was satisfactory that with the exception of H. M'Creadie they were at full strength.

The Dundee were received with a ringing cheer when they crossed the ropes, a special round of applause being given to Keillor, late of Montrose, when it was seen he had donned the blue and white shirt, the colours of the new club. Mitchell captained the Rangers, and his men were well received when they appeared on the ground.

The play was interesting throughout. McKie, who got much more to do than Haddow, pleased the crowd. The new backs were weak compared to Smith and Drummond, but the three half-backs played well together. The referee fairly staggered the spectators by giving offside in the case of the goal scored by Keillor. Gray's first goal was a soft one, but his second was really wrought for, and was received with great enthusiasm.

Gilligan's first was cheered again and again. Smith, of the Rangers, had the most powerful kick seen in Dundee for years. To say the game was fast when Dundee obtained their second goal is hardly correct, for the ball was flying from player to player with lightning rapidity. The cheering was deafening. The Rangers came up in a body, and A.Roadie shaved the bar.

Now M'Kie showed his powers, but how he cleared his goal is a mystery. At last Longair got the ball, passed it to Dundas, who gave it to Gilligan, and Keillor sent it over to the right, when a free kick was given to the home men. Craig took the kick, sent it hard in, and Dundas headed through amidst a scene such as has never been witnessed in Dundee before. When they equalised the spectators were carried away with the excitement," 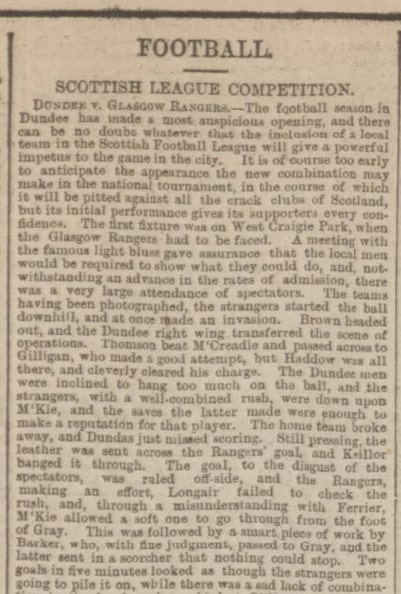