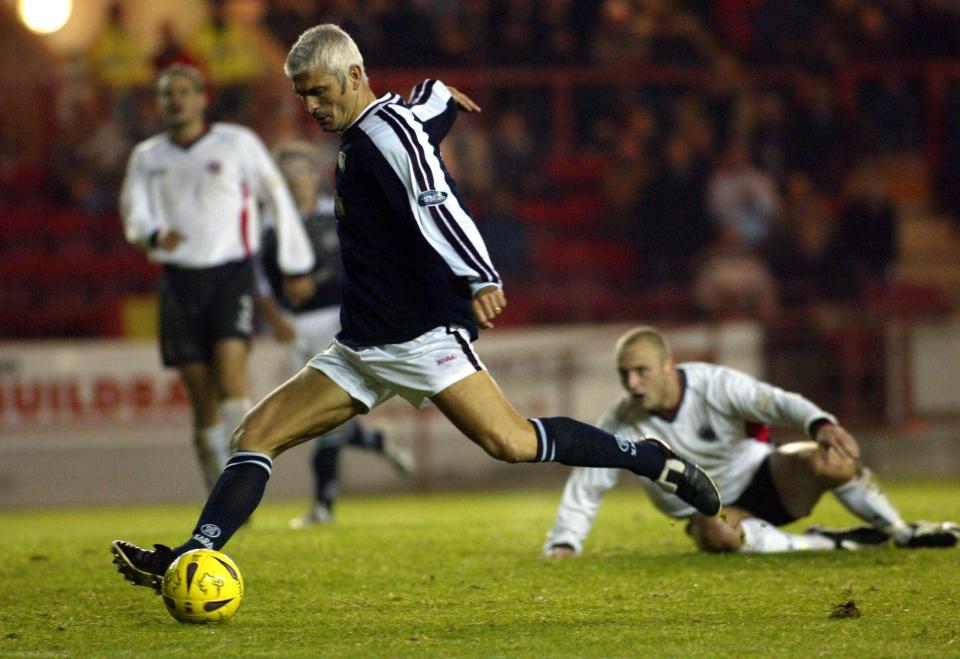 Fabrizio Ravanelli conjured up a magical hat-trick within the space of six minutes at Broadwood last night as Dundee booked their place in today's CIS Cup quarter final draw.

The Italian had Clyde spellbound as he wrapped up the game single-handedly just minutes after coming off the bench.

Until his intervention the Bully Wee still had hope of inflicting a shock. But he took the tie away from them with goals in the 73rd, 74th and 79th minutes.

The First Division side had opened the scoring and proved to be tough opponents, although Dundee's ability to introduce a superstar into the proceedings knocked the stuffing out of them. Nacho Novo (4), with his 12th counter of the season, and Lee Wilkie (65) were the other Dundee goalscorers, while Pat Keogh and Mark Gillhaney were on target for the hosts.

However, the night was all about Ravanelli, who rather touchingly handed the match ball into the Bully Wee dressing room to be signed by the Clyde players before proudly clutching it under his arm.

He will gift it to his children Luca and Mattai when he goes home to see them following Saturday's league match against Hibs.

For the Italian, the feat brought back memories of a UEFA Cup tie while playing in his prime.

"I recall one game against CSKA Sofia when Juventus won 5-0," he said.

"Every time I touched the ball I scored and I got all the goals.

"It was important for me to score three tonight, it was my quickest ever hat-trick, and I will take more confidence into Saturday's match. I now want to score at home before our fans.

"When I was on the bench I was focusing on the match because the manager had told me before the game that I would rest but if the match was not so easy then I would come on.

"Now I will give the ball to my children when I see them.”

Ominously for the rest of Scottish football, Ravanelli added, "I need a month more to be fit as I am still not 100%."

His manager Jim Duffy was understandably delighted with his striker's achievement, saying, "I am very pleased as he has only been here for a short time and has been short of fitness.

"He looked sharp tonight, though, and maybe that was because he was not asked to run about earlier. I decided to see how the game would go and if we needed the extra talent he would be introduced.”

McDonald filled the right back role, with Dave Mackay switching to the other side.

Ravanelli dropped down to the bench and Juan Sara, who replaced him in the Dundee Derby on Sunday, stepped into his shoes again. Clyde were without Chris McGroarty, on loan from Dunfermline, who had picked up a knock.

The game opened in dramatic style, with Dundee squandering a great chance before Clyde opened the scoring. A Dark Blues equaliser also arrived, all within four minutes.

Burley got involved immediately by picking out Fabian Caballero, who was all on his own just a few yards from goal. The frontman was just too casual, however, and he sent his shot past the post when he should have burst the net.

The Bully Wee then went up the park and grabbed the advantage, with Keogh nodding home a Jack Ross cross, looping the ball over the head of keeper Julian Speroni.

But the lead was shortlived and it was the amazing goal machine that is Novo who made the breakthrough.

Juan Sara broke into the Clyde box but his strike was cleared off the line by Mark McLaughlin.

The ball fell to the little Spaniard, who scrambled it over the line.

While the early thrills were welcome, it was a shame that so many away fans missed the action thanks to being stuck in traffic on the gridlocked A80.

The game had to calm down and it did, although Jim Gibson did come close on 20 minutes when finishing off a fine move. However, Speroni was well placed to save.

As the half neared an end, Caballero stung Clyde keeper Bryn Halliwell's hands with a shot before David Hagen sent a header just wide at the far post up at the other end.

The second half didn't start in the same style as the first, but the Dark Blues nearly nicked a goal on 52 minutes when his cross was almost deflected in by Simon Mensing.

The match was struggling to rediscover its early sparkle, but Wilkie adding some polish on 65 minutes by finishing off a tidy move.

He collected the ball mid way up the park and ran on before passing to Caballero, who switched the ball back to him.

Looking calm, the big man steered the ball past Halliwell to make it 2-1.

Clyde hit back quickly, though, and an Andy Millen strike from outside the box had to be pushed past the post by Speroni.

Ravanelli then came on for Caballero and stole the show.

Just three minutes after his arrival he grabbed his first, taking a return pass from Novo before smashing a left-foot shot into the net. Sixty seconds later he made it 4-1 by pouncing on the rebound after a Sara shot had been saved.

The goals kept on coming and on 78 minutes Clyde sub Mark Gillhaney gave his team some hope by shooting home from close in.

However, the super sub was to have the final say, Ravanelli firing home an other to make it a six minute hat-trick. The striker collected a ball from Sara before again shooting low past the keeper.

He could have had a fourth, hitting the post from 15 yards in the final minute.