Georgian striker Temuri Ketsbaia made an impressive home debut as he scored the second goal in a richly-deserved victory for Dundee at Dens Park.

New Motherwell manager Eric Black will now know the task in hand after his side battled hard but were outclassed by Ivano Bonetti's talented foreign legion.

Karl Ready equalised after Juan Sara had given the home side the lead.

Black had been pleased with an opening 1-1 draw with Dundee United across the road at Tannadice and Keith Lasley was fit enough to take his place on the bench.

The long wait for new signing Fan Zhiyi's work permit meant that the Chinese international missed out on making his debut.

And, while they had the better of the early play, it was nearly an unlucky 13th minute for the home side.

Motherwell defender Greg Strong somehow managed to send the ball over the crossbar from a few yards out.

Caballero did likewise at the other end after being set up by Scotland midfielder Gavin Rae, who was being watched by a number of scouts from English clubs.

Barry Smith's cross found Sara, Ready tried to intercept, but the ball fell to Sara once again and he fired home off the inside of the post.

Dundee almost extended that lead six minutes before the break when Ketsbaia met a Smith cross.

But his superb diving header was denied by an equally impressive save from goalkeeper Mark Brown.

Motherwell managed to claw a goal back in stoppage time.

Dundee had several chances to reclaim their lead after the break.

Beto Carranza fired in a shot that passed across the face of the goal before sliding past the post then Sara did likewise.

Ketsbaia finally grabbed the second after 54 minutes to cap an impressive performance.

Caballero released the big Georgian and he went on a superb run that took him 30 yards before he drove the ball past Brown.

The Argentine produced the finish himself after 61 minutes.

Ketsbaia cheekily back-heeled the ball to Massimo Beghetto in the box and the Italian played the ball to Caballero, who curled the shot into the back of the net.

Langfield had been at fault for Motherwell's goal but made amends by blocking a Stuart Elliott effort from point-blank range.

The goalkeeper then repeated the heroics to deny David Kelly. 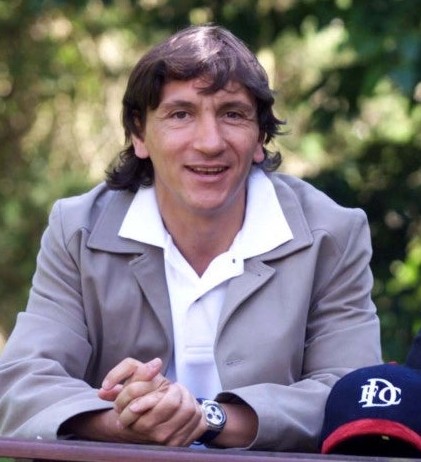 I'd like to start by paying a special thank you to our fans who have been magnificent for all the tremendous backing which they have given us, especially in the last few games when results have not gone, as you, or we, would have wished.

But with the players who have been out injured coming back into contention plus the significant additions we have made to the squad this week, we hope that our fans will soon again be treated to the good and exciting football to which they are used.

And the imminent arrival of Chinese international defender Fan Zhiyi and Georgian midfielder Temuri Ketsbaia will, hopefully, ensure that you to continue to enjoy good football when watching Dundee.

Apart from welcoming these two new players, everyone at Dens is delighted that some of the quality that we have been missing is beginning to return

Juan Sara returned to the side after injury last week at Dunfermline, whilst Javier Artero is back with us and such is his enthusiasm to start playing again, we are having great difficulty in holding him back in training. After his illness though, we will not be rushing Harry back until the time is right

More immediately Beto Carranza is set to return from injury and hopefully be in the squad this afternoon, but, of course, we will be without Giorgi Nemsadze who has to have surgery on his knee and Marcello Marrocco who has a back problem. Unfortunately, it looks as though we might well be without that influential pair until the end of the year.

In the meantime whilst the result at Dunfermline was not to our liking, it was good to see the way in which the young players, who have been introduced in this and other recent games, reacted because, in addition to recruiting abroad, it is very important to see them coming through and again some of them will feature in the today's squad.

This afternoon is a very important game for us because hopefully it will be the last time that we are without so many of our quality players. After today's match against Motherwell, the squad will be almost ready

Victory is vital this afternoon as we come to the end of the first round of games and I would be far happier taking a points total of fourteen rather than eleven into the second stage of the season.

Considering all the problems we have endured in the first three months of the season, I don't think that this would be too bad a total and certainly a platform from which we can build.

Of course, that means beating Motherwell and their recent form, not to mention the boost they will have received following this week's appointment of Eric Black as manager makes securing three points that bit more difficult, but that is very much the target which we have set ourselves.