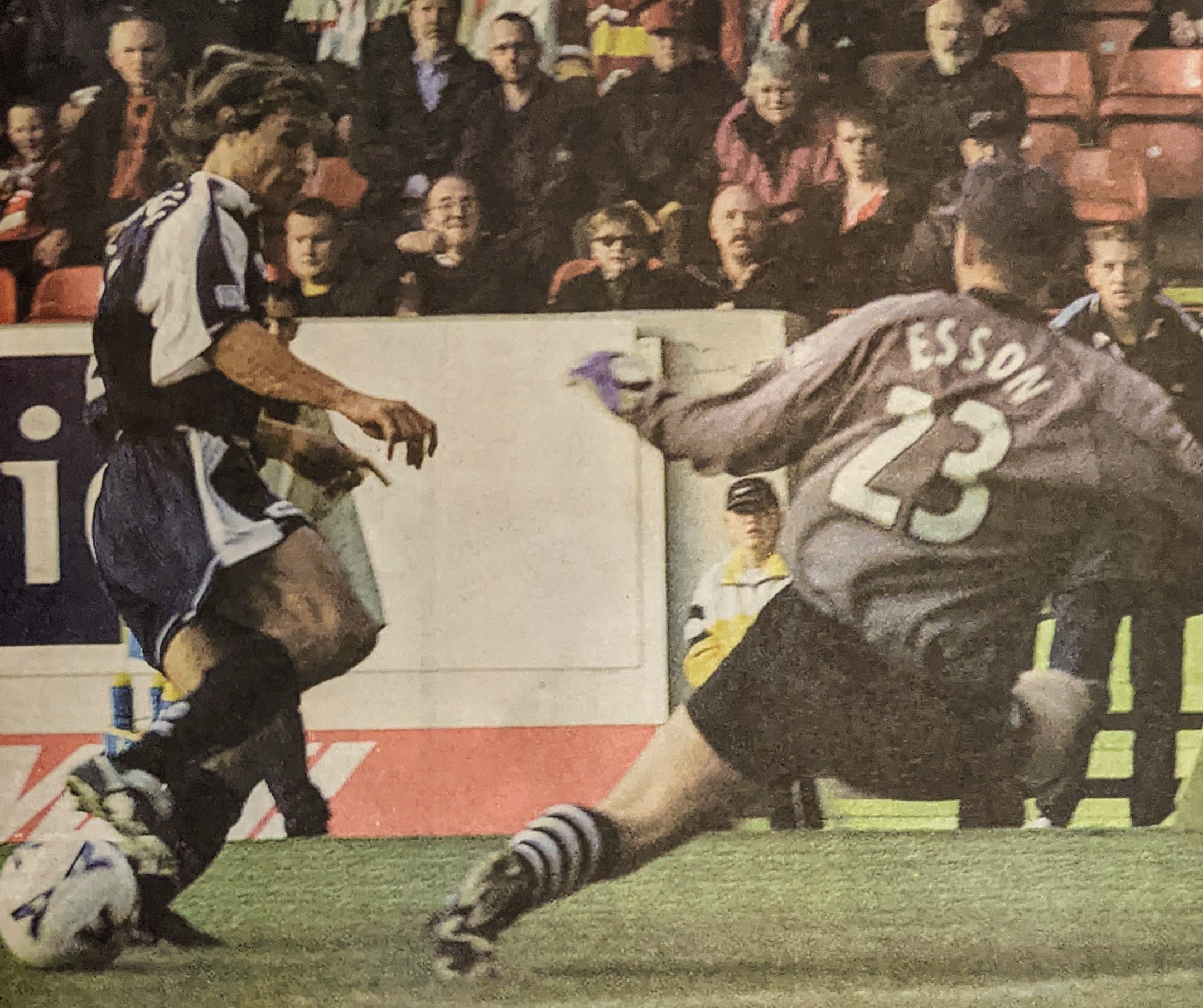 Claudio Caniggia made a dream debut for Dundee with the killer second goal five minutes into injury time to finally sink a brave Aberdeen who battled for everything.

The Argentinian international only came off the bench on the stroke of half-time as replacement for the injured Steven Milne. He then had a frustrating time as a lone hit-man as the visitors played most of the second period with just 10 men after Gavin Rae was sent off for retaliation near the start of that second period.

Rae had to walk for stupidly flattening Philip McGuire after winning a foul, but, ironically, the Aberdeen defender also found himself back in the dressing-room before the end.

He had to go for a dreadful late challenge on Caniggia in the last minute and the former Roma and Atalanta striker had the last laugh just when it looked like the visitors were hanging on for a single-goal win.

The Dons pushed too many players forward, and substitute Georgi Nemsadze broke away before feeding Caniggia with a perfect pass.

The big money man showed his class by waiting for Ryan Esson to narrow the angle before sticking a delightful left-foot shot into the far corner to send the Dark Blue hordes home very happy to Tayside.

It was hard luck on a hard-working home team who never gave up, but simply lacked the experience and skill that their big-spending rivals now have in spades.

The early disappointment for the 2500 Dundee fans who snapped up their tickets for the game in record time was that Caniggia was on the bench.

His place up front went to young Steven Milne, who, last season, was voted Forfar player of the year after a highly productive spell at Station Park on loan. It must have been a real boost for the classy kid to keep the Argentinian superstar waiting just a little bit longer for a debut appearance in the Dark Blue colours.

In fact, it was a show of strength at Dens Park nowadays that Georgian skipper Nemsadze and that other recent Argentinian import Beto Carranza were also only listed as substitutes.

Aberdeen kept faith with the classy kids that had been the first Scottish team not to lose to Celtic this season, meaning there were six U/21s in the starting line-up again.

Milne almost made a dream start as the youngster found himself clear in the box, but he could only turn Javier Artero's cross over the bar from point-blank range.

It was a great game with both teams going forward at pace, and Rab Douglas showed why Celtic and Rangers both wanted him with a stunning save. Robbie Winters got clear in the box with a great bit of skill and hit a powerful left foot shot, but the Scotland squad member made a stunning reflex save to turn the ball round the post.

Within seconds, Bonetti had scored a quite superb goal at the other end after Juan Sara broke forward into the Aberdeen penalty area at speed.

The ball broke back to the Italian, and he hit a sublime chip from 25 yards that comfortably cleared Ryan Esson and dipped in under the crossbar.

That seldom looked enough until Caniggia struck as the Dons poured forward looking for a way back, but they came up against an inspired Douglas, who will be sorely missed when he heads for Glasgow.

Man of the Match RAB DOUGLAS showed what a loss he will be to the Dark Blues with a great performance for the visitors. Dundee simply had too much class for a hard-working Aberdeen.