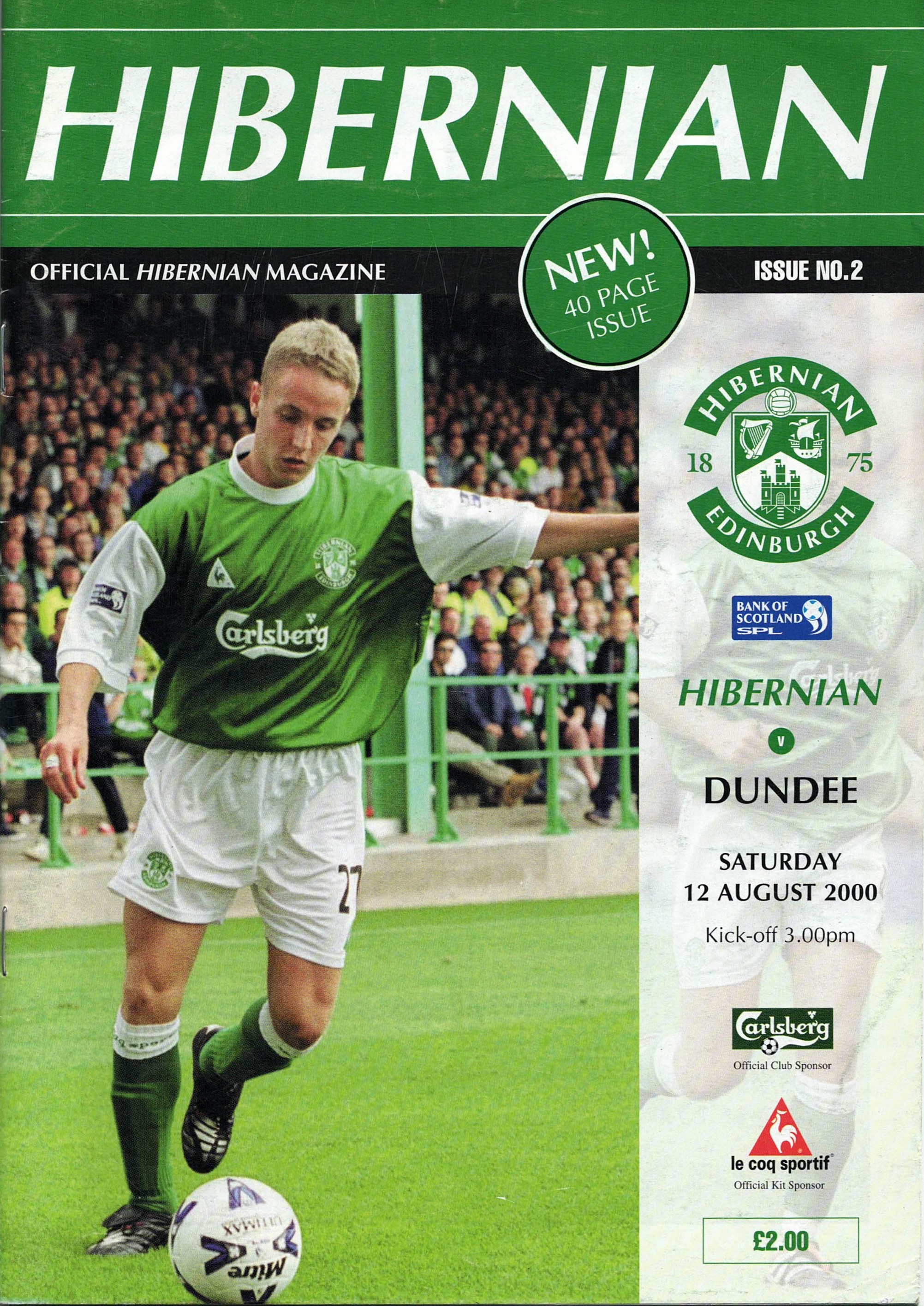 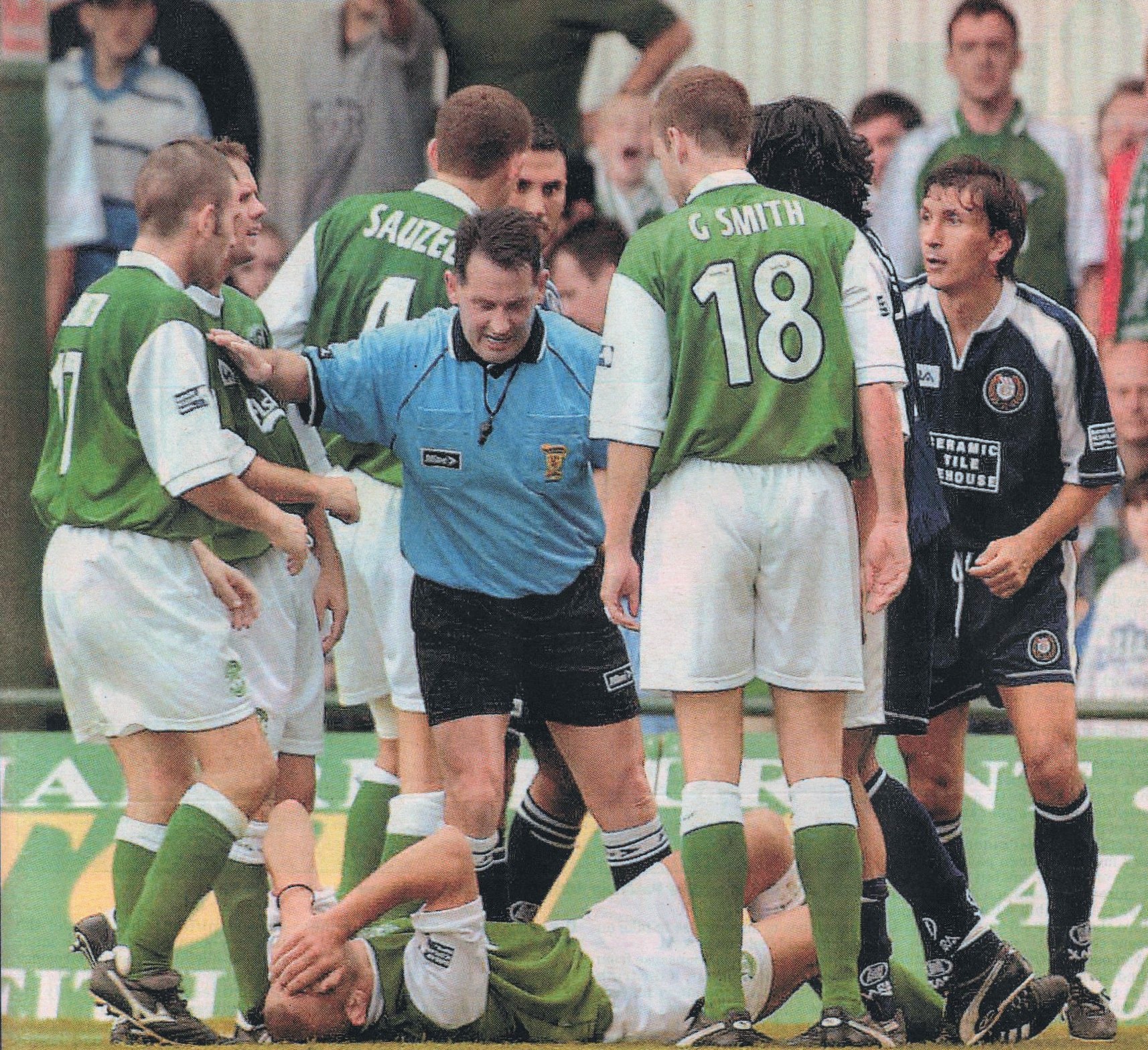 Both teams started brightly and the first half chance of the game fell to Hibernian in the sixth minute.

Frenchman Franck Sauzee curled a hopeful free-kick into the Dundee box and defender Paul Fenwick rose above to head just wide of the mark.

But it was Dundee who drew first blood in the ninth minute.

Georgi Nemsadze cut the ball back to Argentinian striker Fabian Caballero, who found himself in acres of space to fire a powerful right-foot shot into the bottom corner.

The visitors were living up to their pre-match billing early on, playing with flair and creativity.

However, they were left stunned in the 16th minute when Hibernian got back on level terms, courtesy of a brilliant solo effort from Didier Agathe.

Russell Latapy played the ball to him on the half-way line and he superbly held off the challenges of four players before sliding the ball past a helpless Robert Douglas into the bottom corner.

The home side were fired up by their equaliser and they could have taken the lead in the 20th minute when Paatelainen rose in the area to head Latapy's corner just past the upright.

Despite the much-vaunted talents of the visiting players, Hibernian were providing a more than adequate opposition.

Agathe, in particular, was beginning to hurt Dundee with a series of surging runs.

The home side had a gilt-edged chance to take the lead in the 31st minute after Marco De Marchi brought down Tom Smith in the area.

Latapy took the spot kick, but goalkeeper Douglas pulled off a great save to his left to deny the Trinidadian striker.

But Hibs continued to press and they again went close in the 39th minute when Paatelainen headed Ulrik Laursen's cross into the path of John O'Neil, but he failed to capitalise and the visiting defence cleared the danger.

But the home fans did not have to wait long to go in front and they did it in magnificent fashion with Agathe again producing a brilliant finish.

Latapy played a perfectly-weighted ball into his path and Agathe did not hesitate to curl a superb right-foot shot past Douglas.

Dundee's problems increased in stoppage time at the end of the first half when goalscorer Caballero was sent off for elbowing Jack after the Hibernian man had come in with a reckless tackle to floor the Argentinian.

Hibernian looked comfortable after the break with their extra man and were happy to let the opposition come at them.

In the 55th minute Jack saw glory from 22 yards out, when he should have squared to O'Neil in yards of space, and hit a poor effort into the arms of Douglas.

Moments later Sauzee got a sight on goal from the same distance, but he too failed to find the power to beat the goalkeeper, who saved comfortably.

Hibernian continued to press and in the 61st minute they should have stretched their lead when Latapy played the ball through to O'Neil in the box, but the former St Johnstone man over-elaborated and gave Tweed time to block his effort.

But Dundee came close to grabbing an equaliser in the 68th minute when Bonetti played the ball through to Juan Sara, who took it round goalkeeper Nick Colgan, but Paul Fenwick was on hand to make the clearance.

Dundee's revival was short-lived as substitute Dirk Lehmann, on for Paatelainen, made a dramatic contribution in the latter part of the game.

Then he sidefooted a centre home to put the result beyond doubt.

With just five minutes remaining the ball broke to another substitute, Stuart Lovell, in the area, and he fired low past Douglas into the bottom corner to put a rather unbalanced shine in the scoreline.