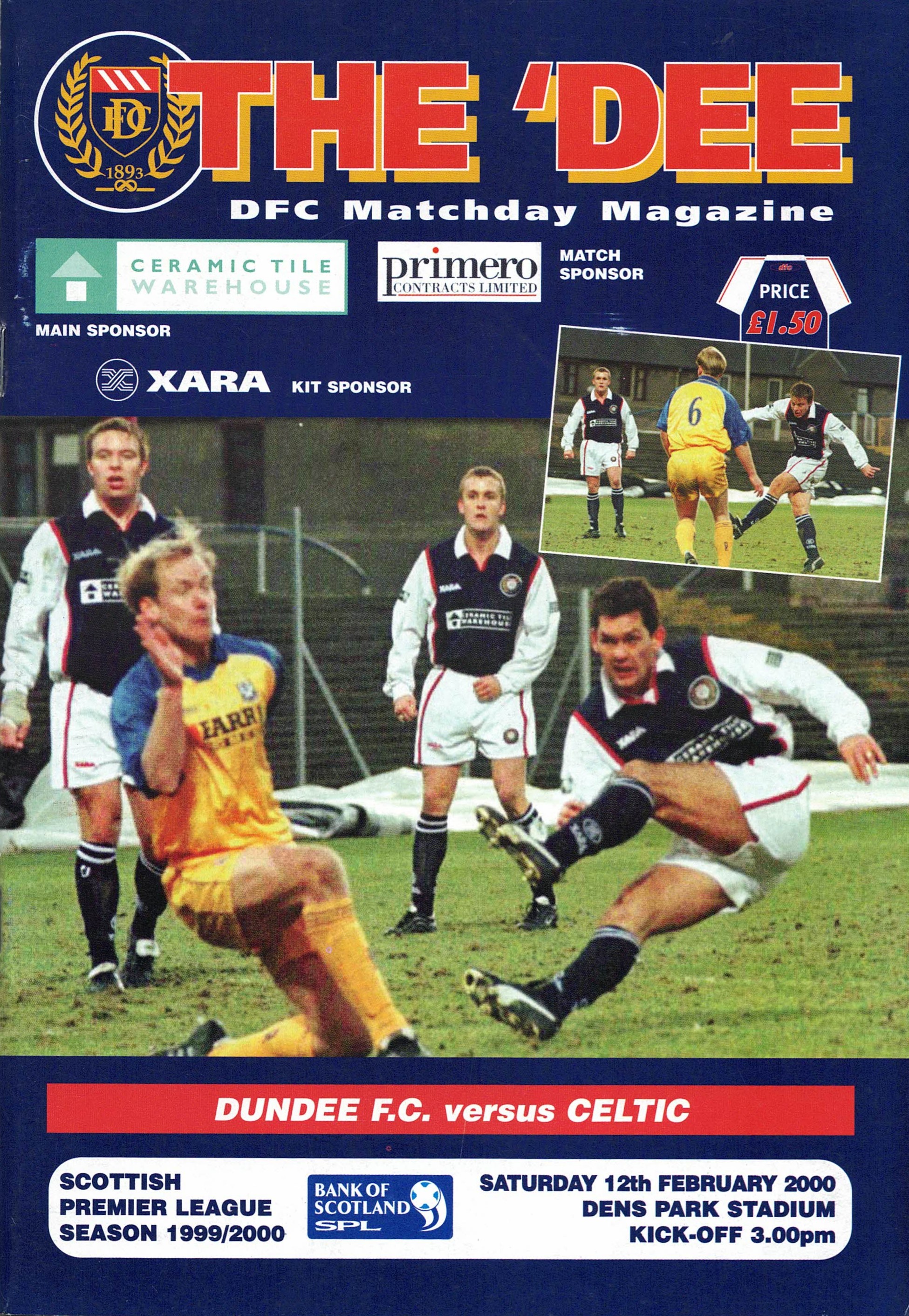 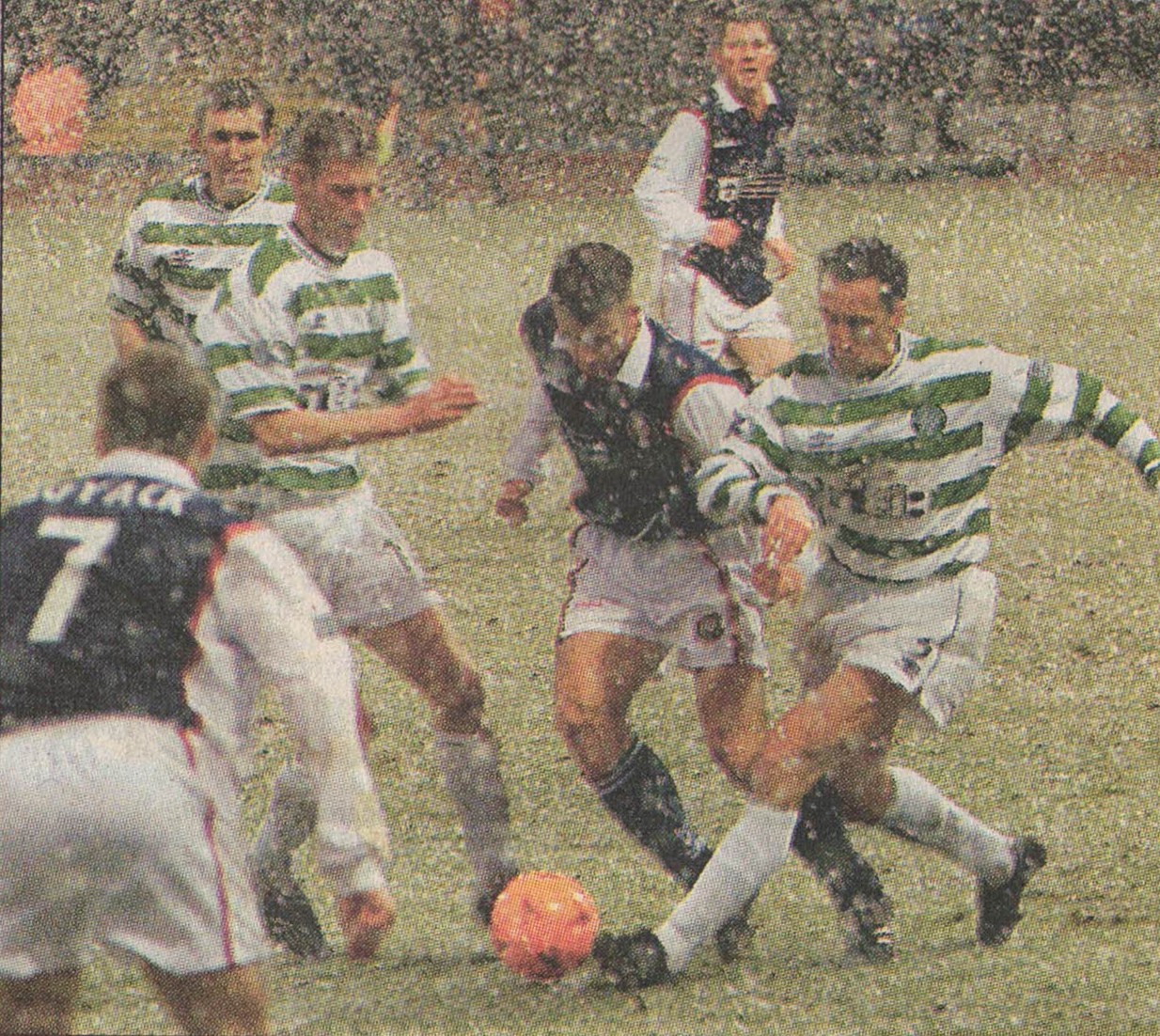 Kenny Daglish didn't promise anybody any overnight miracle cure because his team has suddenly become Barnes-less. That being the case, the Parkhead new/old boy was as good as his word. He hasn't. It wasn't the same old Celts, though.

Alan Stubbs was shoved forward to a place in the middle of the park. He didn't quite look like a seal out of water as the snow came down in the Arctic Circle (sorry Dens Park), but it was a close call.

Dalglish's philosophy at this early stage of his new/old career was as plain as the red-with-the-cold nose on his face. Cut out the thrills. Go for the kill. Never stand still. Put opponents through the mill.

All that will fit the hill, meantime, till we really get things sorted out. And, hopefully, put on a bit of style, It's certainly not a pretty sight as itnstands, albeit effective in places like Dundee

There is, however, no doubt KD's into his job in a big way.

He was in and out of his dugout like a fiddler's elbow all afternoon, and was beside himself with delight every time his team scored

Dalglish, of course, won't be kidded. Up until the first goal went in his team weren't one bit better than the home side.

That, believe me, isn't saying anything for either outfit. The first half, quite simply, didn't take place.

Over the piece, though, it was more important for the Hoops to win rather than play well. They did both!

The opening goal was a mix of good luck and good play, especially after Moravcik sent in a harmless cross from the left.

Mjallby's height and weight saw him rule the roost in that crowded area and he stormed in to head the ball into thennet. Dalglish jumped about so much you'd have thought he'd scored itnhimself.

And the manager did a Highland Fling after Viduka trailed the ball along the 18-yard line, stopped dead in his tracks, and sent a skidding grounder behind the goalie.

Dalglish was much more composed at number three. He's obviously getting used to it!

Douglas beat Burchill to a through ball and a the rebound went straight to Healy, who chipped a beauty over both of them into the empty net from a good 30 metres

That was the kid's first touch of the game and drew polite applause from his boss. Poor Dundee really didn't know what hit them in the end.

They had their moments of near glory and looked like getting out with a draw. But most in the ground seemed more interested in what the Hoops were up to.

There were a couple of bookings in what must have been one of Bobby Orr's easiest games ever.

Both of our last two home games have finished goalless, but with very differing displays.

Against Kilmarnock, our battling qualities after being reduced to ten men brought us a hard won point, but we were then given a very hard time by Ayr United in the Scottish Cup just three days later.

As I expected the visiting First Division side were really up for the occasion. Teams from lower divisions tend to treat matches like that as their cup final and Ayr were no exception. Unfortunately, we failed to respond to the challenge, but as luck would have it are still in the competition.

One positive factor to emerge from those two games was that we kept a clean sheet in both, though I am not trying to make excuses for the performances. We all know that we can and must improve on the quality of our play given in our last two home outings.

Tuesday's replay with Ayr was postponed because of the gales in the west and the outcome will not now be known until next week. Before that, however, we travelled to Fir Park which is fast becoming a very happy hunting ground for us as we chalked up our third consecutive win there.

What was equally as welcome as the three points was the manner of it. It was a magnificent performance. and the type I'd like the team to produce on a weekly basis.

Another feature of the afternoon was the non stop support we received from our travelling. support. I am publicly on record as saying how much the fans can help us during our home games.

Yet, so far, all our good work has been done away from home, so once again I would. request the fans to get behind us, because I am sure the players will respond.

Not that I am trying in any way to make any excuses or blame the fans for our poor home record this season. There is, however, a section who become extremely critical if things go wrong, and this, undoubtedly, has a habit of spilling on to the pitch, putting the players under extra pressure and unnerving them,

Away from home, the players tend to be that bit more relaxed and helped us achieve much better results than here at home. Last Saturday, for example, the Motherwell support soon became critical of their side which gave our players a lift.

I don't know if the fans really. appreciate just how great an influence they can have by getting behind the side. Like myself, they will be very frustrated and not easily. accepted what has been on offer in most of our home games this season.

But they must remember. that we are still very much in the process of building a team here. This is only the second season back in the Premier League and it is vital that we retain that status. So it is a question of taking each season step-by-step until we can get real consistency in terms of our results and performances both home and away.

Approaching the likes of today's game against Celtic is easier than most. Whenever you face either half of the Old Firm, you are always the under-dogs, which, in turn, means the fans are behind us from the start.

And that is what I would request for the remainder of the season, let's all work together and just see what the Club can achieve.