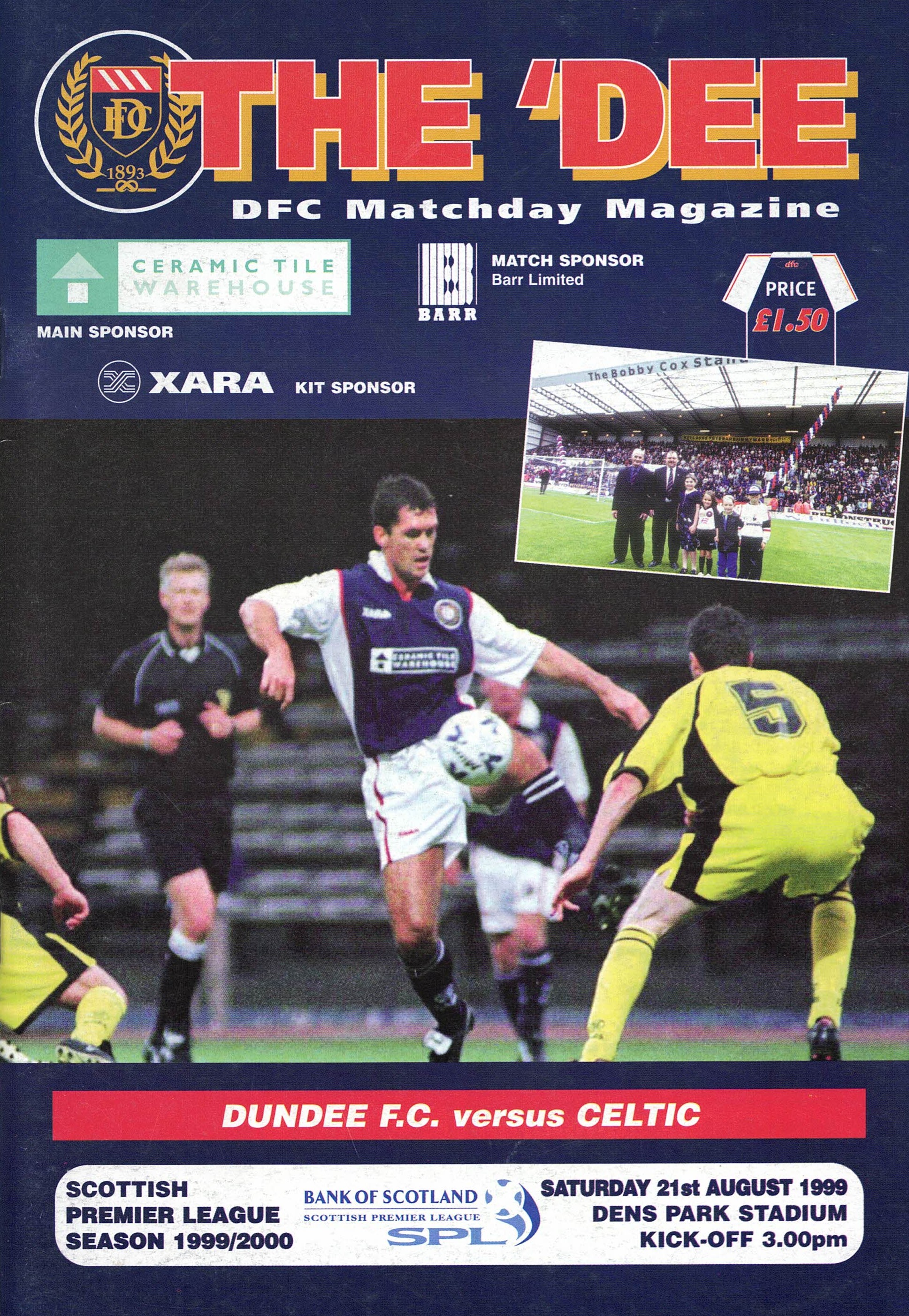 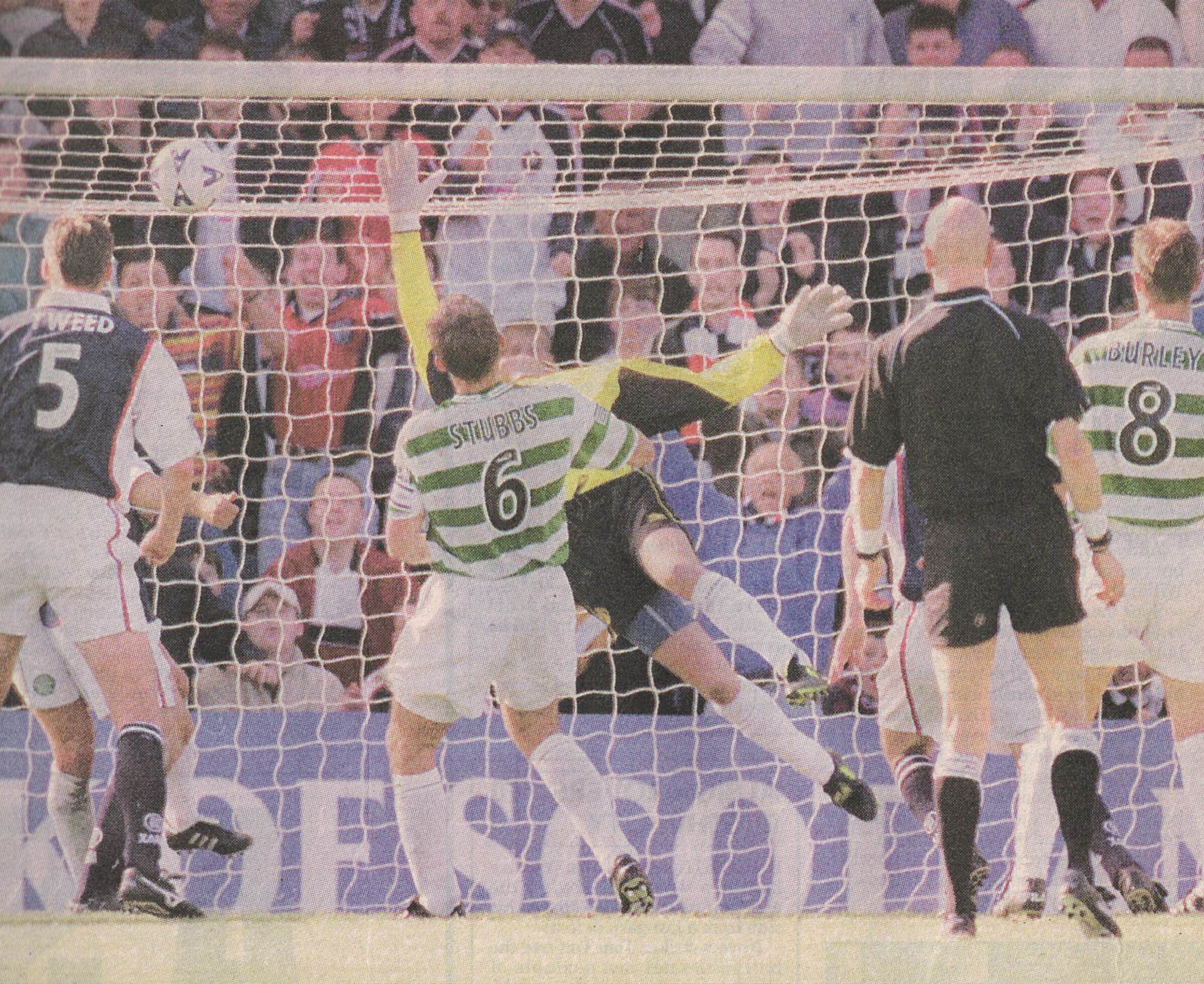 Just as Dundee thought they'd salvaged an improbable point with an equaliser three minutes from time, Celtic went one better.

Henrik Larsson scored a sensational winner just as the referee signalled three minutes of time was being added on.

It was a cruel blow to a Dundee side which refused to play second fiddle to their more talented opponents.

At the end of the day Celtic deserved their victory, although try telling that to anyone in dark blue.

That said, the home side have only themselves to blame, because Celtic's winner should have been prevented.

When a long throw-in from Tebily arrived in Dundee's box, Rae's headed clearance was weak and Tweed looked slow to react.

Henrik Larsson could hardly believe his luck at finding himself clear, and easily beat Douglas to his near post.

Just two minutes earlier, Dundee had equalised out of the blue after Vidar Riseth was red-carded for a high, late tackle on Annand

Boyack took the free-kick before Riseth had completed the long walk and Berkovic was booked for kicking the ball away in dissent.

From Boyack's second attempt at the free-kick, he delivered a beautifully-flighted ball to the far post which Grady headed back for Lee Sharp to nod in

Although it all came right for Celtic in the end, you have to wonder if they have discovered anything in their two visits to the City of Discovery in six days

Last Sunday at Tannadice they made the fatal mistake of expecting to win. Here, although they dug in more. It was anything but a fluent performance.

It certainly wasn't an encounter for the purist, although the last three minutes will long be remembered.

For too long, however, play was too fragmented to flow freely. And the longer it remained this way, the better Dundee liked it.

With the hosts not allowing Celtic to dwell on the ball, the visitors lacked vision and penetration.

When they finally went ahead, the goal was in keeping with the general scrappiness of play.

Petta crossed from the right and Dundee's defence stopped when Stephane Mahe appeared to handle.

However, referee Rowbotham allowed play to continue, and the French left-back took full advantage of his luck to bear Douglas.

The visitors then passed up a couple of good chances to bury Dunder, and in the end almost paid for their weak finishing

The untidiness of the occasion was not helped by weak refereeing by Mr Rowbotham, who adopted an arrogant high-handed approached m

Although the visitors were unhappy at Riseth's red card, Mahe could easily have beaten him to the bath before scoring for threatening behaviour towards van Eijs.

Instead Mr Rowbotham booked both. He also yellow-carded Wilkie for bringing down Viduka and Miller after another tangle with Mahe

Man of the Match-LEE WILKIE

While madness and mayhem ensued it was difficult to believe Wilkie has just turned 19. The debutante defender looks a great bet for the future.

Celtic, this afternoon's visitors, made a terrific start to the season, so we were always acutely aware of how difficult a match this was going to be,

Their defeat last Sunday, definitely makes our task even harder, and I hope that we don't get caught up in the backlash of their reversal by Dundee United at Tannadice.

For our part, we go into the match after two confidence boosting results.

After acquiring our first Premier win of the season at Pittodrie, we were again amongst the goals during the week with our 4-0 defeat of Dumbarton in the CIS Insurance Cup.

At Pittodrie last week, first our performance was by half far the more impressive, and, this again proved to be the case against Dumbarton.

Indeed, had we been more disciplined after establishing a 3-0 interval lead, we would almost certainly have posted an even bigger winning margin.

But, being a cup tie, the all important thing was to get through, which we did, and there was the added bonus of recording a clean sheet for the second time in three days.

Since the start of the season, as you will no doubt be aware, we have had, and currently have, a number of players on trial as I look to add to the first team pool.

As for this afternoon's match, I hope that we can build on not just the Pittodrie result, but on the performance in the way we want to play the game.

Certainly, results over the past seven days and continuing to find the net regularly is vital in terms of confidence as we approach our softest test of the season so far.