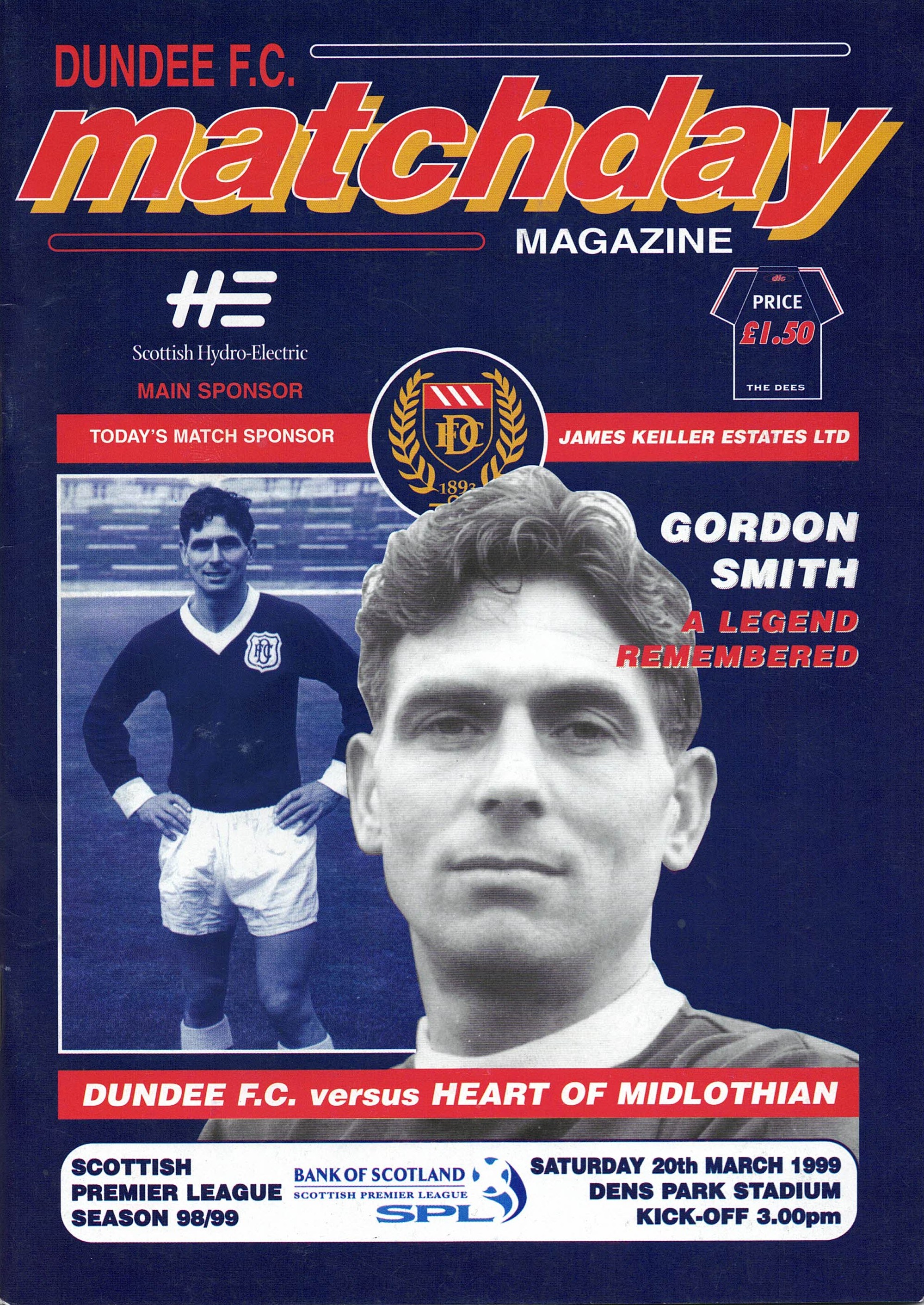 Dundee must wish they could play Hearts every week.

Then they wouldn't be fighting for survival. They'd be contesting the championship itself!

Because, make no mistake, if it's Hearts who are relegated, as is beginning to look more and more likely, the Scottish Cup holders will look back in horror at their four encounters against last season's Division One champions

Dundee have won all four, accounting for almost 50 per cent of their points total.

And, make no mistake, Dundee thoroughly deserved to win this one.

Hearts may have enjoyed more possession. However, the Dark Blues displayed far more tenacity an occasion when artistic impression counted for nothing.

Hero of the hour was Dundee striker Eddie Annand with two clever goals in a 13-minute spell carly in the second half.

Firstly, he anticipated a long clearance from skipper Barry Smith and out-ran Paul Ritchie before intelligently lobbing Rousset from 18 yards.

Then, when Raeside headed on a Boyack corner, Steady Eddie deceived Rousset with a well-directed header at the far post.

It's difficult to believe Hearts won the Scottish Cup just 10 months ago. Today, they are but a shadow of that side.

In fact, that triumph at Celtic Park was the last time they've won away from Tynecastle.

Despite plenty possession. Hearts never looked like scoring. The last time they did so in the league was at the beginning of December, almost four months ago.

The closest they came here was as early as the fifth minute, when Dave McPherson: headed over from a Fulton corner when he should have hit the target.

However, with Dundee defending well and closing down quickly in midfield, all Hearts possession counted for nothing. Even before the home side did go ahead.

they looked far more dangerous on the break When they did break the deadlock, Hearts were a sorry sight and looked like they could have played until next season without scoring.

Veteran McPherson was easily their best player. The rest must take a good, long look at themselves and stop making excuses

Given the amount of possession Hearts for long spells of this game, they never once forced Dundee keeper Douglas into making a serious save.

The visitors are low on confidence and it's difficult to see where they are going to bolster this from.

Dundee came up with a working-class performance in what was a working-class occasion and thoroughly deserved to win. However, on a bumpy pitch with an awkward wind, Dundee's attitude was bang on. They had outstanding service from Raeside, Rae, Robertson, Boyack and Annand.

Near the end, Annand squandered a good t chance to record a rare hat-trick when he shot over from good position.

Given the seriousness of the occasion, it's no surprise there were five bookings. Miller. for a late tackle on Fulton, Annand for pulling Locke's strip. Guerin for dissent, Naysmith for pulling back Boyack and Locke for a trip on Robertson.

For about three months now our season has been one of stops and starts with a game one week and no game the next and this has not helped us with our form stuttering in similar fashion.

Certainly, we seem unable to get a run of any consistency going and the last two games have provided a perfect example of that.

Against St Johnstone, we started badly and were punished by the loss of an early goal and simply never recovered against a Perth side which apart from the opening quarter of an hour didn't display the qualities that they have of late.

Then we had a break again and even although we played a closed-doors match against Hibs, these games lack that competitive edge which you need.

So last what wasturday we headed for East End Park for big game in terms of the result.

And for the first half we played well in an evenly contested game. Indeed the quality of our crossing was as consistent as we have had in any game this season, unfortunately, we couldn't get anyone on the end of these.

But to go from that to the manner in which we performed in the second half was totally baffling. Right from the kick-off at the start of the second half, we let them get on top of us and as a consequence, we lost a bad goal from which we never recovered.

As a consequence, things at the foot of the table are tighter than ever, but we still have a quarter of the season to go and the bottom six still all have to play each other and it is from these games that we must take our fair share of points starting with the visit of Hearts this afternoon.

They are a side against whom we have done very well this season and we have got to look for a continuation of that form although we fully appreciate how difficult a game it will be as they are very much in the same boat as ourselves.