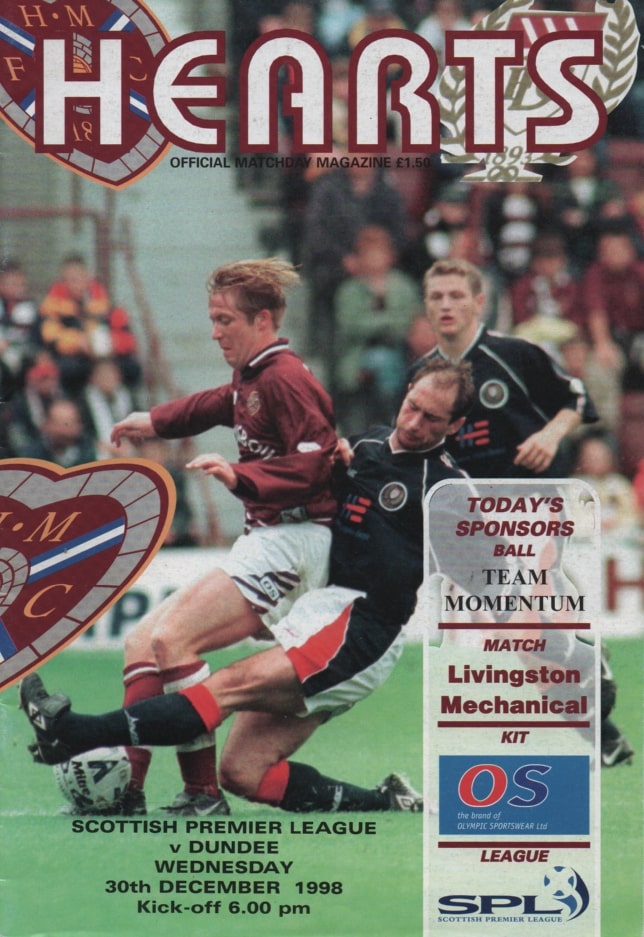 Scotland international David Weir was sent off as bogey team Dundee sent Hearts tumbling to their fourth defeat in a row at Tynecastle last night.

Weir was the last man when he pulled down James Grady in the area, and Lee Sharp's resultant penalty and a Willie Falconer header proved enough to sink Jim Jefferies' men, for whom on-loan striker Derek Lilley scored a debut goal.

To cap an awful night for Hearts, keeper Gilles Rousset was also red carded following an incident in the tunnel after the game.

Dundee are now level on points with Hearts on 23 points - and have a game in hand-having beaten the Edinburgh club three times this season, and a win or draw in the Tayside derby on Saturday should give them a better than evens chance of staying clear of the relegation issue in the second half of the season.

Hearts, on the other hand, are sinking fast and if things don't improve soon. boss Jefferies will be seeking a miracle. He tried to breathe new life into his side last night with the introduction of two new signings - winger Leigh Jenkinson, signed earlier in the day from Wigan for a nominal fee, and Lilley, who joined the Tynecastle club on a three month loan deal from Leeds United.

The first casualty of this was big Jim Hamilton, who dropped to the bench as Jefferies chose to pair Lilley with the fit again Gary McSwegan in attack.

And Lilley almost got off to the perfect start when he beat Robert Douglas to Thomas Flogel's cross in the sixth minute, but his header drifted over the crossbar from eight yards.

At the other end, Willie Falconer was handed a great opportunity in the 10th minute after a good ball from Brian Irvine had set Lee Sharp free on the left, but the striker should have done better than head harmlessly wide.

However, Dundee stunned the home crowd after a slip from Weir cost both player and club. A knockdown from Falconer seemed to cannon off his shin into the path of James Grady, and as the striker raced into the area Weir hauled him down from behind.

Referee Hugh Dallas had no hesitation in pointing to the penalty spot, and with Weir also the last man, an instant red card was produced. To make matters worse for Hearts, Lee Sharp coolly converted the spot kick to claim his first goal for the Dens Parkers.

Jefferies pulled Dave McPherson into the middle and attacking midfielder Flogel to right-back to try and cover the loss of his defensive anchor and the changes were effective as Hearts hit back, but Gary McSwegan was guilty of a glaring miss in the 27th minute.

A Steven Pressley cut-back found the striker unmarked in the area, but he could only shoot straight at Douglas from eight yards.

Lilley then had a vicious shot parried away by Douglas a minute later, and McSwegan again fired straight at Douglas when in a good position in the 34th minute.

Three minutes later, however, Hearts finally hauled themselves level with the simplest of goals. Lee Makel's cross from the left caused the damage, committing both defence and keeper, and Lilley arrived at the back post to turn the ball into the net from the tightest of angles.

They were only to stay level for five minutes, though, as Grady, who had incurred the wrath of the home support when Weir had been sent off, did it again by springing the Hearts offside trap with the defence waiting for a flag. His pace took him past Rob McKinnon, and his cross was met by Falconer six yards out, whose low header was well directed past Rousset into the bottom of the net.

The visitors continued to have the better of the game after the interval, using their extra man to good effect, and spurned two opportunities to increase their lead.

Rousset did superbly just to get to a fiercely struck Hugh Robertson free-kick. As the ball came back out, with the keeper on the ground, it seemed certain Barry Smith would tuck away the rebound, but his shot went the wrong side of the post.

Lilley attempted to redress the balance at the other end but could only shoot straight at Douglas.

Dundee were still looking the likelier team to score again, and Jefferies brought on Hamilton for the ineffective Jenkinson in the 68th minute.

But his first significant contribution was to prevent Smith scoring at the other end after the full-back had been put through by Dariusz Adamczuk.

Douglas was at full stretch to turn Hamilton's volley away two minutes. later after Lilley's cross had found him unmarked in the area.

But as the clock wore on it was still the visitors who created the better opportunities, with Rousset called upon to deny Grady on two occasions. And despite having the majority of the possession, Hearts' bleak midwinter was to continue with their fourth home defeat of the season.