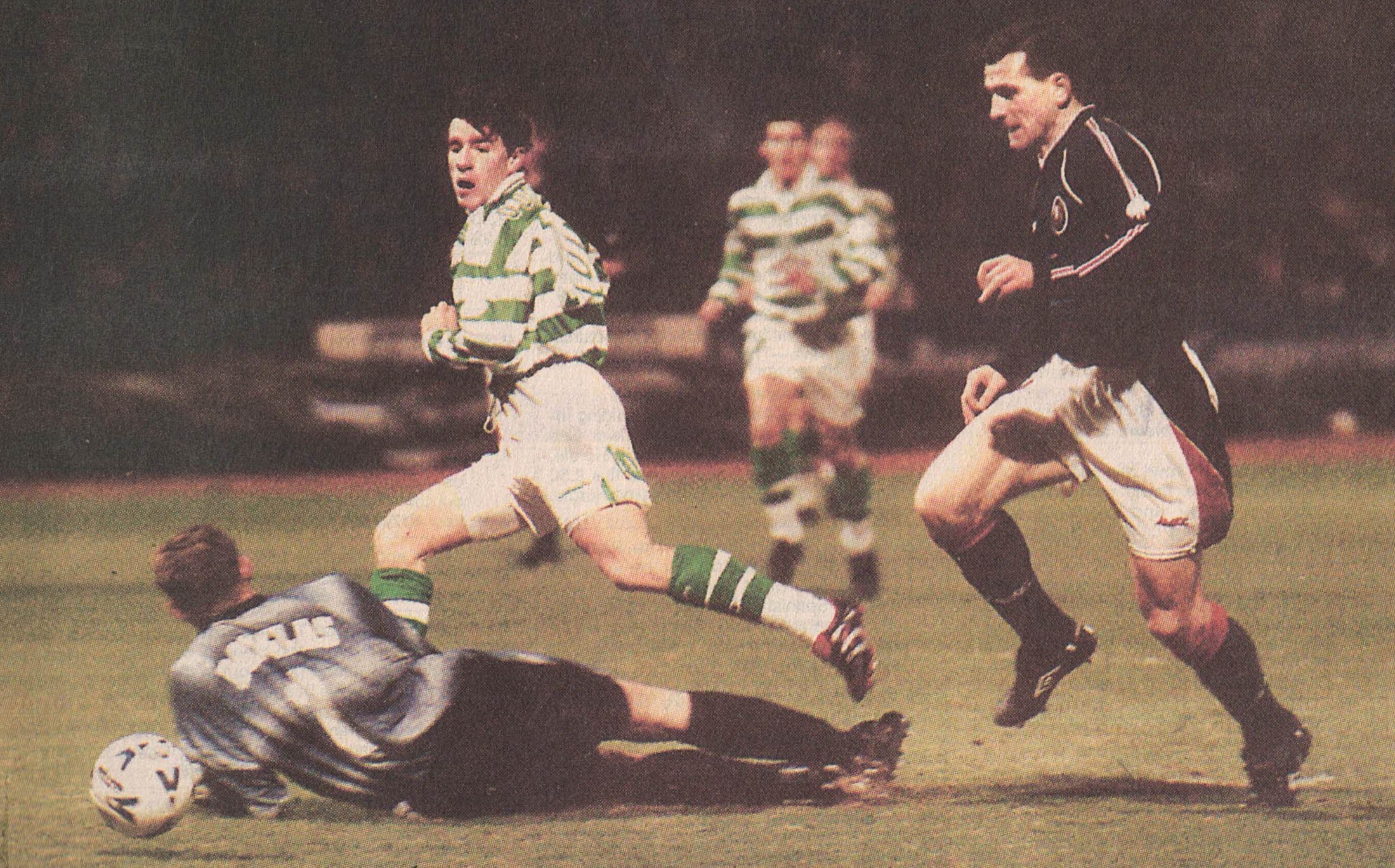 The Dark Blues were all too easily swept aside at Dens Park last night as Celtic closed to within seven points of Premier League leaders Rangers.

The Bhoys came to Tayside with a woeful away record this term comprising just one win in nine attempts but they had far too much class for Dundee.

Given the gulf in expenditure on the two teams that, of course, hardly comes as a great surprise.

Neverthless the manner of this reversal cannot be ignored. Nor, more importantly, can the fact the Dees have bagged just five points out of the last 21 they've contested and only United and Dunfermline are presently worse placed.

Money may be tight at Dens but if the club are to give themselves a decent chance of holding on to their hard-won SPL status you feel they'll have to gamble risking say £500,000 now in the hope of staying up and securing a continued share of the top flight pot-and allow boss Jocky Scott to strengthen his player pool.

For the second successive home match Scott got stick from disgruntled occupants of the main stand but, realistically, you wonder whether he can drag much more out of his existing squad.

Scott has reshuffled the pack more times than a croupier recently but this was the Dark Blues' third straight loss. And while being beaten by Celtic might be acceptable, they've also gone. down to Motherwell and Aberdeen, both of whom tralled them a fortnight ago.

Over-worked at the back-where their Inability to handle genuine pace and quality movement was once again highlighted-and totally over-run in midfield, Dundee spent almost the entire. first half on the defensive as Celts created almost at will.

And possibly the only thing which saved them from the Bhoys' superiority being more accurately reflected in the Interval scoreline was the fact that having effectively secured victory inside the opening quarter of an hour, Celtic settled for turning on the style rather than going for the jugular.

The second period saw Dundee play a more prominent part in proceedings and to their credit they kept plugging away but it wasn't until the closing stages when the match was well and truly over that they really looked as if they might find a way past Jonathan Gould.

"I'm disappointed not only at our performance but also the manner in which we lost the goals we did," said Scott.

"The way Celtic played tonight we simply couldn't afford to give them an early goal of a start but we did and after that their movement was very good and their passing and pace excellent.

"Defensively we didn't do well, allowing Celtic too much space to play, but I also felt self-belief was a problem.

"We didn't seem to think we could beat them.

"Maybe our confidence has suffered through losing the last two games but I don't think that's what was behind tonight.

"I believe that we are perhaps concentrating too much on playing football rather than on the negative side and making sure we don't lose games."

It took Celts just three minutes to stamp their authority on the game. And what a goal the opener was.

An exquisite 40-yard pass from Lubomir Moraveik placed the ball on the left foot of Phil O'Donnell just outside the area.

And O'Donnell's first touch took him across and away from Brian Irvine, who had a particu larly uncomfortable evening, leaving him needing only to flick past the advancing Robert Douglas to deliver the first blow of the night. The second goal, which arrived ten minutes later, was almost as well crafted and finished too, although woeful marking had a part in it also.

Midfielder Paul Lambert showed impressive skills out on the left wing to get the better of Jim McInally and create room to cross. And his inch-perfect delivery to the far post was duly dispatched past Douglas by a bulleted header from the unhindered Vidar Riseth. Memories of the 6-1 thrashing Dundee suffered Parkhead early last month came back.

But, as often hap pens, the winning team took at their foot off the pedal.

Celts might have had a penalty when Barry Smith appeared to head a Riseth cross against his own arm but referee Willie Young saw nothing amiss and perhaps justice was done, for the Clarkston official had adopted a similar view when during the opening seconds Willie Falconer seemed to be barged by Johan Mjallby at the other end.

It seemed as if Mark Burchill had made it 3-0 just after the break. But although he fired home at the second attempt after initially being thwarted by a terrific one handed save by Douglas he'd controlled the loose ball with an arm and the goal was chalked off.

The third goal was delayed only until the 58th minute when a fine four man move ended with Celtic enhancing their lead, albeit a further instance of poor marking and a piece of rank bad luck played a part in the counter too.

Swede Henrik Larsson knocked down a ball from Riseth for Burchill who in turn released O'Donnell on Dundee's right and his cross found Larsson in acres of space.

Larsson's downward header beat the keeper but was cleared off the line by Irvine. However, the big defender could only look on in anguish as the ball then struck the back of the prostrate Douglas and rebounded into the net.

Celtic went looking for a fourth and only a timely intervention by Barry Smith-taking a Larsson cross off the toes of Burchill-and substitute Lee Sharp first blocking a surely netbound Larsson effort then getting in the way of an on-target drive by Riseth stopped them completely running riot.

Dundee might have reduced the arrears 14 minutes from time but Irvine's header from a Shaun McSkimming corner was booted off the line by Moraveik.

And hard though they pushed during the latter stages to secure some consolation from the evening, their efforts went unrewarded as this impressive Celtic showing was topped off by a clean sheet.

"There was a good cohesion and shape to our team and the passing was strong and penetrative.

"After getting the first goal the players had the freedom to express them selves and I think they gave not only our supporters but also the people watching this game on television some nice feelings."

Next up for Celts is the Old Firm clash with Rangers on Sunday and on last night's display don't bet against them further closing the gap on their title rivals.

The ironies of this couldn't have been better illustrated than in out last three fixtures. Against St Johnstone, we failed to perform, but managed to scramble something out of the game.

Then came the fixtures against Motherwell and Aberdeen when, in the first half of both games, we played some of our best stuff of the season.

The bottom line, however, was that we took nothing from either game.

Against Motherwell at Fir Park, we missed a penalty kick and consequently went into the break on level terms. After the resumption, we conceded too much territorial advantage and ended up paying the price, losing out to a superb McMillan strike from a free-kick.

Again it was a similar story at home to Aberdeen. Another good performance in the first forty-five was marred by not scoring as many goals as we should have done when we were on top.

The loss of two bad goals, the first immediately before the break, undid all the earlier good work and once more left us rueing missed opportunities. The underlying message is clear.

You are not judged how you play, but on results. And I can assure all our supporters that we will keep working in the hope of turning things our way again.

Celtic herald the start of a very busy and important week.

There is no hiding the fact that we were well turned over by them when we met them at Parkhead, though our cause wasn't helped by being reduced to ten men early on in game.

However, that afternoon Celtic demonstrated just how good a side they are capable of being. So we simply cannot allow them to stage a repeat performance.

Finally, I hope you all had an very enjoyable Christmas and would like to take this opportunity of wishing you all a very Happy and Prosperous New Year.