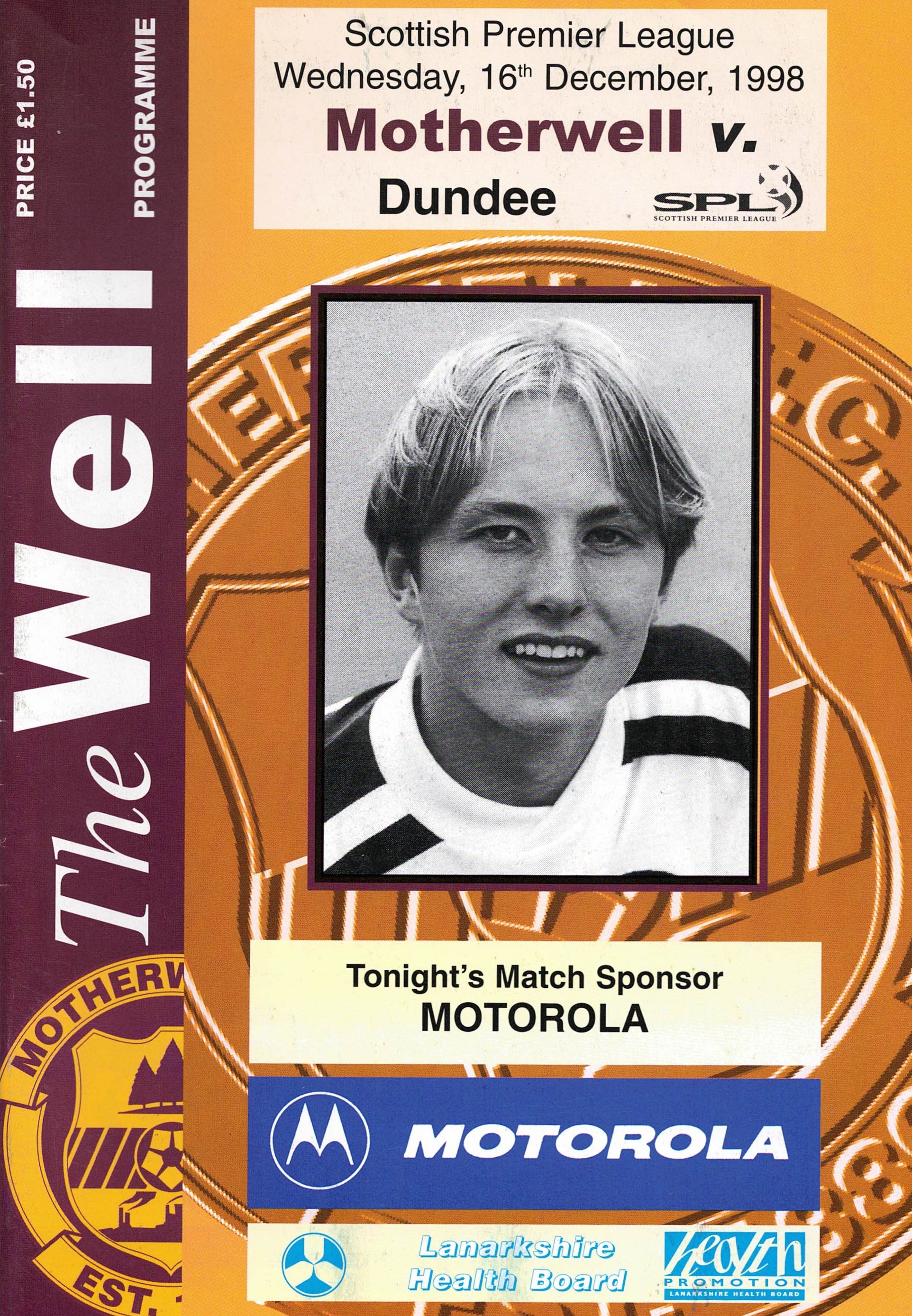 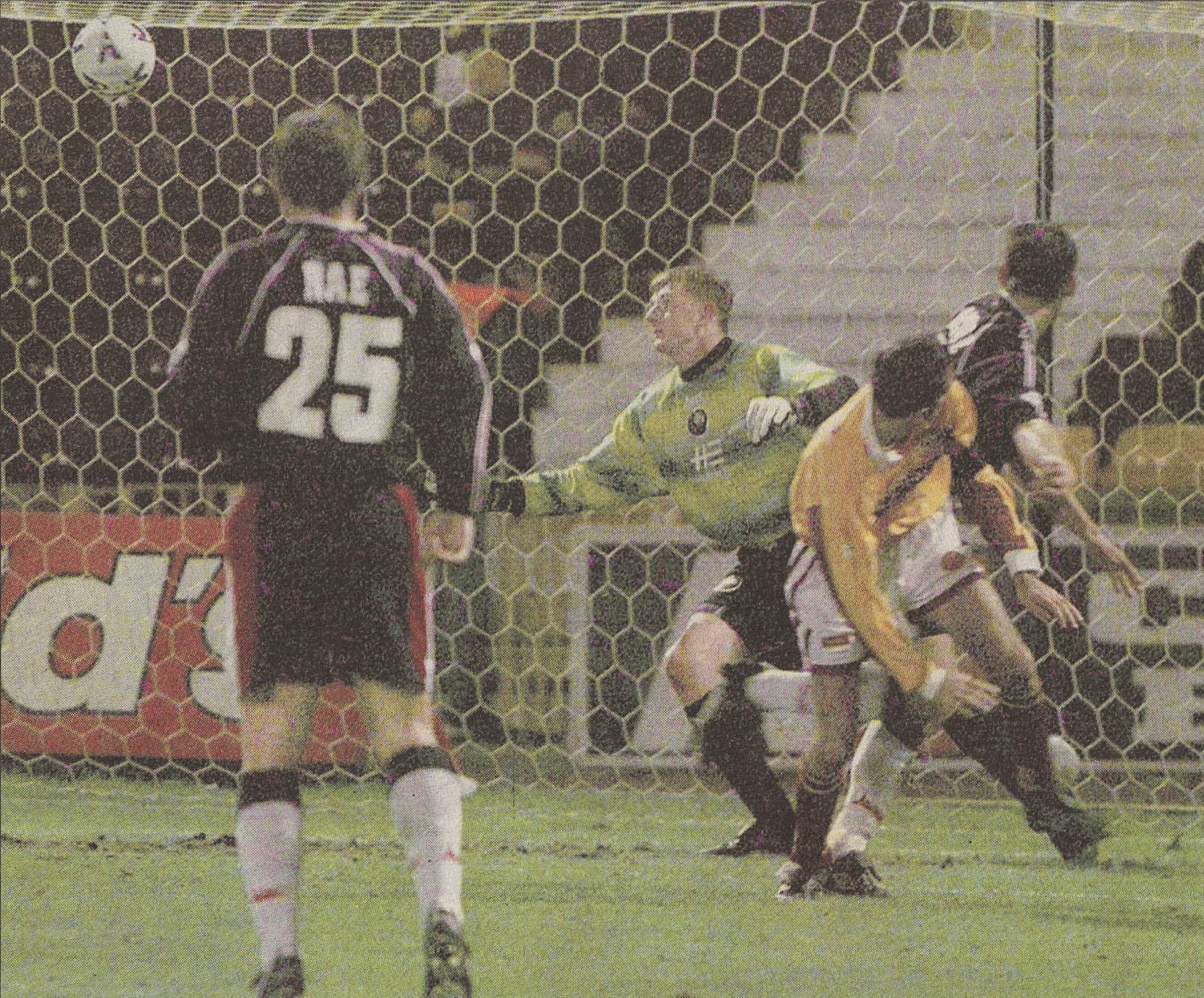 Dundee crashed to only their second defeat in seven games last night, cursing a spot-kick squander by lain Anderson.

Compared to the weekend display against St. Johnstone there was not a great deal wrong with this Dark Blues performance-particularly defensively-at windswept Fir Park.

But Anderson's first-half penalty miss ultimately returned to haunt them as Motherwell secured a victory which moves them two places up the table, ahead of the two Dundee teams.

And Dens boss Jocky Scott was not at all happy. "The Premier League is all about taking your chances and, while Motherwell took two of theirs, we missed a penalty and In the second-half wasted opportunities to create better chances than we did," said Scott.

"The free-kick they won the game with was a great strike which our keeper had no chance of saving, but we shouldn't have. been giving away a free-kick in that position and at that time in the game.

"I can never criticise my players for effort but a lot of it is channelled in the wrong way. For example, tonight too many of them wanted to run with the ball instead of passing and ended up losing it and that's some thing we have to learn from."

Opposite number Billy Davies. was not in markedly better mood.

"This is a massive victory for us but I am very disappointed with our performance-we did not play well at all," he said.

"We passed the ball far better on Saturday against Dunfermline yet only drew."

New boy Sharp began the move which led to the award with a high cross which Anderson knocked down for Grady, whose attempted hook home was blocked by the raised hands of Shaun Teale.

But, while he sent Mikko Kaven the way from the spot, the Under-21 internationalist's casual conversion effort struck the outside of the keeper's left

hand upright. Four minutes later and Motherwell got their noses in front when Owen Coyle head-glanced a Pat Nevin cross beyond the reach of Robert Douglas. And it was a deserved lead, for Coyle had earlier beaten Douglas only to see the ball come back off the inside of an upright.

Then only a wonder save from the in-form Dundee keeper prevented Ged Brannan netting with a 20-yarder which took a wicked deflection off Shaun McSkimming and both Brian Irvine and Gavin Rae produced saving clearances as first John Spencer then Coyle were poised to pull the trigger inside the area.

You can never write this Dens Park side off, though, and they promptly marched up field and equalised.

When McSkimming's initial effort following a short free-kick was blocked the ball fell to the departing Dariusz Adamczuk and his low, driven shot took a deflection which wrong-footed Kaven.

It was a goal the Polish midfield star, who earlier this week rejected the offer of a new contract and signalled his intention to move on next summer, clearly enjoyed, as did the 400-strong travelling support who had earlier unfurled a "Dariusz must Stay" banner.

The opening stages of the second-half saw both sides probably rightly-fail in penalty appeals with McSkimming's claim over a Spencer tackle being rejected before referee Eric Martindale incensed Well by awarding only a corner after a Nevin cross struck the elbow of Anderson.

And it was Dundee who began to create the better chances. The inspirational Irvine might have made it 2-1 when he got on the end of an Anderson corner but headed wide, then Grady hooked the ball just over the crossbar after Willie Falconer knocked down a McSkimming cross.

Motherwell responded with a diving header from Nevin which Douglas dealt with comfortably and then a curling shot from the edge of the from the former Scotland winger which left Douglas rooted to the spot but missed the target.

With 13 minutes remaining the Steelmen claimed a spectacular winner.

A free-kick awarded on the edge of the D for a Smith trip on Nevin ended up being taken a couple yards forward of where the incident occurred but it is doubtful whether that made difference to the out come, for Stephen McMillan planted the ball in Douglas's top right hand corner before the keeper moved.

The home team were reduced to 10 men in the 82nd minute when Teale, who had been booked earlier, was shown the red card for elbowing Irvine, who was cautioned for his part in the flare-up.

But Dundee could not capitalise on that, the closest they came to netting being when Irvine met a high hanging ball from Grady only to send his header well over the bar.

In addition to having Teale ordered off, Motherwell had Lee McCulloch, Simo Valakari and debut maker Tony Thomas booked.