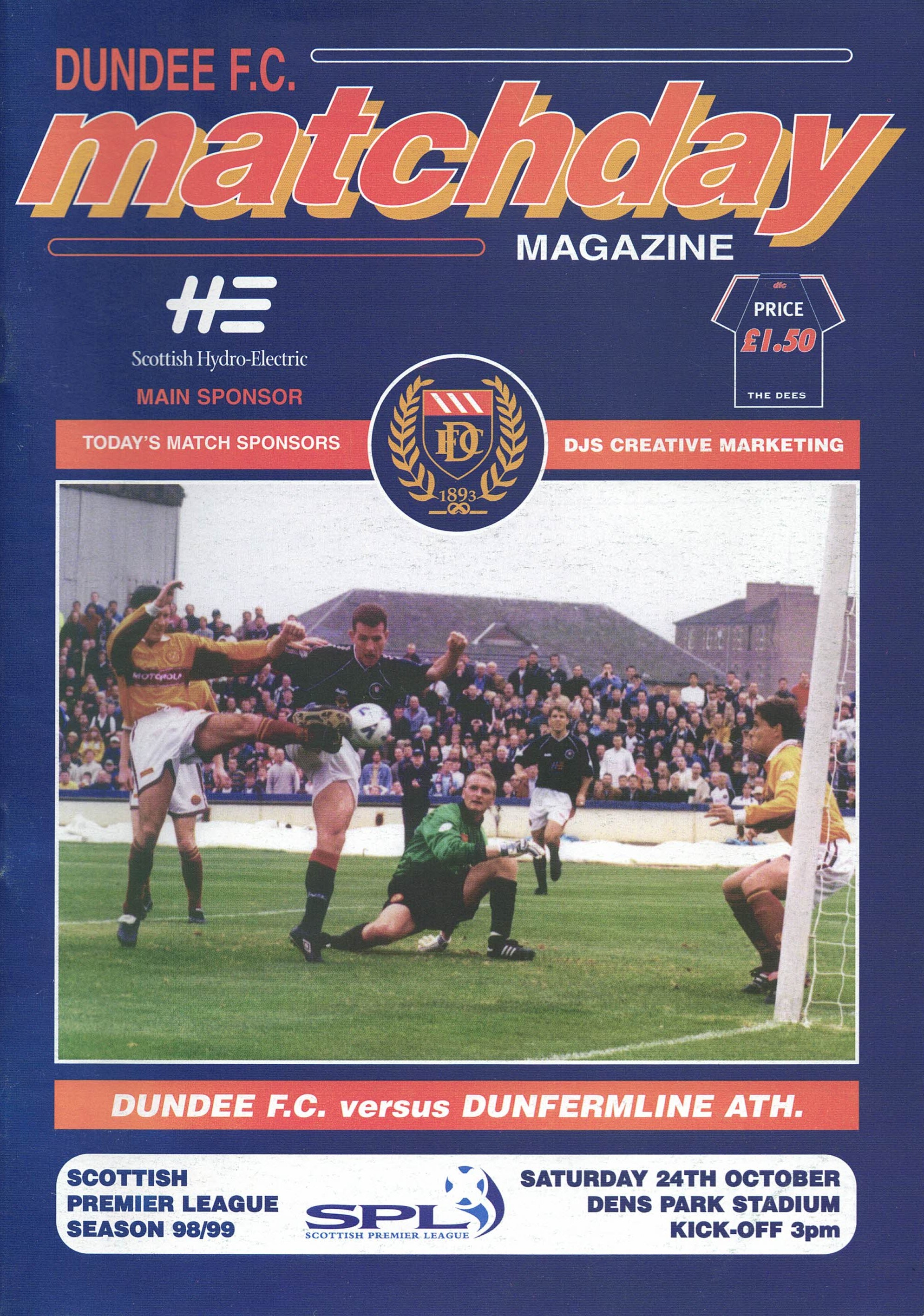 Dunfermline paid dearly for their lack of a killer touch at Dens Park last night as Willie Falconer's first goal for Dundee moved the Dark Blues into seventh spot in the Premier Division.

Falconer struck just after the hour mark to continue his side's recovery from their desperate start to the campaign. Yet the game should have been well beyond their reach by then and would have been had not the Pars-who, as a consequence of this defeat and Motherwell's shock win over Rangers, now sit bottom of the table-been guilty of some awful finishing.

And Dark Blues boss Jocky Scott was the first to acknowledge there had been a degree of luck about the victory.

"This is a very, very important result for us and in some ways a fortunate one," he admitted.

"There was a strong wind out there and each team dominated when they had it behind them, although Dunfermline to a greater extent than ourselves.

"But, that said, I still thought we lacked composure in the first half when we didn't defend well and could not get out of our own half.

"Going in 0-0 at half-time after the way the match had gone gave us a boost, though, and we went back out for the second half, stepped our performance up and scored from one of the few decent crosses we had.

"While the fact we have had a clean sheet won't do the confidence of our defence any harm, I realise we still have a lot do especially in the front areas."

Dunfermline number two Dick Campbell admitted the new-look Pars with their increased emphasis on stylish football-will have to rediscover the club's traditional battling qualities if they are to take the pressure off themselves.

"Despite having five good chances we have failed to score again," he reflected.

"And it is a worry that having sorted out our defensive record our top scorer at the moment is Andy Smith with just three goals.

"But all credit to Dundee because they battled for everything and the spirit they showed in the second half was tremendous."

Campbell pledged there would be changes including a recall for Smith, who made only a brief appearance as a substitute on Saturday when St Johnstone visit East End Park as the Pars seek to spark a reversal in their fortunes.

"I hope now we will see the character of Dunfermline shining through because we don't want to stay bottom of the league," he said.

Dundee, with lain Anderson in for the suspended Dariusz Adamczuk and Gordon Hunter handed his first start at the expense of Robbie Raeside, were given a thorough going over in the first half.

Unsettled by a combination of the strong but slick approach of the Pars and the fact goalkeeper Robert Douglas clearly wasn't fit, the Dark Blues defence looked ill at ease throughout an opening period in which Scott McCulloch, Craig Faulconbridge, Gerry Britton and Stewart Petrie were all guilty of glaring misses.

A tremendous run from halfway took McCulloch past Anderson, Brian Irvine, Barry Smith and Willie Miller early on only for the left-back to fire wide when, with just Douglas to beat, he ought to at the very least have found the target.

Then Faulconbridge lost marker Hunter to meet a whipped-in cross from Petrie but first-timed the ball high over the bar.

There was further drama in the home box when Douglas got down well to a crisply-hit cross-cum-shot from Greg Shields. But the ball broke back off of him and rolled towards the line where Smith managed to block but in trying to clear succeeded only in finding Miller, off whose body the ball rebounded and just cleared the keeper's right-hand post.

It seemed as if a goal had to come but the Fifers continued to spurn their opportunities. Britton looked as if he couldn't fail to score when he took possession after Jim Melnally mis-controlled just outside his own area and rounded Douglas. But the celebrations of the former Dens striker were cut short as Smith appeared seem ingly from nowhere to clear off the line.

And worse in finishing terms-was to follow as shortly before the break the on rushing Petrie found himself with just the keeper to get the better of, after Douglas could only beat a Britton rasper into his path, but dragged the ball wide of the target.

Dundee's only noteworthy scoring efforts up to that point had been when Eddie Annand narrowly failed to connect with a McInally ball into the box and Falconer tested Lee Butler with a shot on the turn.

Yet they returned to action following the interval to stamp their authority on proceedings and with 61 minutes struck the decisive blow, Falconer meeting a deep cross from Miller and giving Butler no chance with a powerful downward header.

And they very nearly went two up when Butler punched out an Anderson corner only as far as Mclnally, whose low, driven return ball would have found the net but for a clearance off the line by Andy Tod.

With little more than quarter-of-an hour to go Dunfermline replaced Fauleonbridge and Gavin Johnson with Smith and Derek Ferguson but Douglas and his previously overworked rearguard saw out the remainder of the game relatively comfortably, although the closing stages might have been even more comfortable for the Dark Blues had they been awarded the spot-kick they seemed entitled to when Tod looked to have shoved Irvine to the ground.

Petrie and Irvine received the only yellow cards dispensed by referee Martin Clark.

It not only seems, but is a long time since we played here at Dens Park.

The combination of two consecutive away games plus the free week for the recent internationals means four weeks have elapsed since our last home outing against Motherwell.

That was a game from which I felt we deservedly collected all three points. Not only thet but we played some good football, creating plenty of chances, the only disappointment being that we didn't win by a bigger margin.

Then came two games on the road and these were contrasting ones.

At Ibrox, we met & Rangers team full of confidence, but on the run of play, we were vary unfortunate not to take something out of the game.

In the first hall, particularly, we played very well.

Unfortunately, in the second hail, we defended far too deep which enabled them to exert more pressure on us, culminating in us losing the game late on when Albertz scored with a 25 yarder.

Even in the face of defeat, we could take confidence from the game at Ibrox which should have carried onto the visit to Pittodrie last Saturday.

Regrettably, however, we let ourselves down in the first half hour against Aberdeen. Frankly for the opening thirty minutes we weren't at the races allowing Aberdeen to dictate and consequently went in a goal behind at the interval.

More spirit and character were in evidence in the second hall, fortunately, as we twice came from behind to gain a will earned point.

The introduction of lain Anderson and the way he performed in the second half definitely helped us and it was good to see that all the hart work he has been doing over the past month coming to fruition.

Once again Eddie Annand was on the score-sheet and that is no bad thing for any striker's confidence. Now that we are back at Dens Park, we must ensure that we continue where we left off against Motherwell, although inevitably, our opponents, Dunfermline, will have other ideas

They recorded an excellent result against Celtic, so we are fully aware that today's contest will be the usual difficult game that we have come to expect when facing Premier opposition

Having said that, we have now played everyone once and results and the league table reflect how little there is between all the teams, with the possible exception of Rangers and Celtic.

So, we know that we can compete and match the other tears, provid es that we work very hard and show good discipline.

Although we started the campaign badly in terms of results and points, after nine games, we were not far off the points tally we had set for each quarter.

Hopefully, with the experience we have gleaned so far, the second quarter will bring in a few more points than the last one.

And certainly, we got off on the right footing towards our target by gaining a point at Pittodrie and this afternoon I would ike to think that we can mprove upon the defeat that who suffered at Dunfermline's hands earlier in the season.