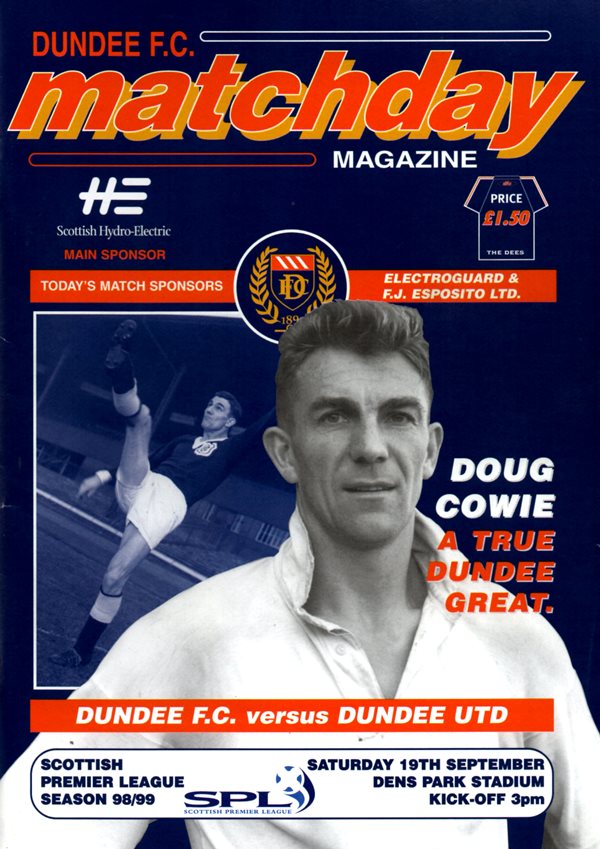 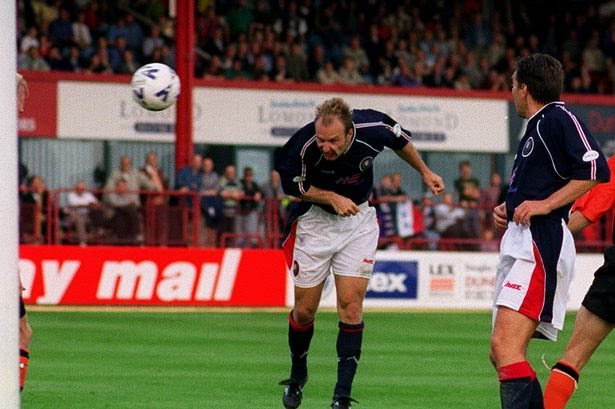 Jocky Scott and Paul Sturrock are unquestionably two of the most exciting players ever to play for these Dundee clubs.

So with both now elevated to the respective hot seats at Dens Park. and Tannadice, it's only fair to expect Scott and Sturrock to produce exciting teams, too. And that's exactly what this full house was treated to.

A genuine thrill-a-minute derby, with Dundee thoroughly deserving their last-gasp equaliser after finding themselves two down against the run of play.

Willie Falconer nodded it on and Dariusz Adamczuk salvaged the point with a close-range header.

Prior to this grandstand finish, United looked like winning thanks to Sturrock's famous trademark from his playing days - deadly finishing on the break. At both United's goals, Dundee got what

they deserved for chasing the game too early. Firstly, Zetterlund found his fellow Scandinavian Olofsson in acres of space down the right. When the cross came over, Gary McSwegan found even more space and headed easily beyond Douglas.

Then, while Dundee were still feeling sorry for themselves, Zetterlund again pinpointed Olofsson, and this time the big Scandinavian did it on his own, drilling the ball low into the net.

However, before United could consolidate their two-goal advantage, substitute Eddie Annand brought the hosts a glimmer of hope when he slipped his marker to head in a cross from Falconer.

Although Dundee left it late, their spirit and never-say-die attitude thoroughly merited their reward, although United had chances to kill Dundee off at 2-1 2-1.

United more than made their contribution to this thoroughly enjoyable encounter. The visitors tried to play with three men up

and stretched Dundee at every opportunity. Although the first half ended goalless, that had nothing to do with a negative approach from either side. Just the opposite in fact.

Falconer and Grady both passed up decent opportunities for Dundee, while United were never slow to cause trouble at the other end.

That they didn't create a clear-cut chance until McSwegan's opener was down to the fact did quickly enough in support, not get forward

If this is the way the bottom two in the Premier League are capable of performing. the new set-up must have a great chance of succeeding

Both sets of fans received the utmost value for the price of their tickets.

Although referee Young struggled to please the fans, he did well to leave Dens Park with just two names in his book - Adamczuk for dissent and McLaren for diving.

There is no doubt that in the last two games we have shown a significant improvement in the quality of our play.

Fortunately this has coincided with us getting our first points on the board. Our first of the new season came against Celtic at Dens and we followed that up by gaining our first victory over Hearts last week.

The win at Tynecastle was a great result and demonstrates how tight things are in this league. Because we picked up all three points on a day when everyone else drew, we are now breathing down the neck of the rest of the pack.

As I said after the opening two games, we had a lot to learn about playing in the Premier League and slowly, but surely, we are beginning to acclimatise. In the last two outings there have been some good indi Ovidual performances, but more importantly, they have been real team efforts with everyone working hard for each other.

This afternoon sees the first of this season's derby games and these are always great occasions. Like our selves, Dundee United have got off to a slow start to the league campaign, but that in no way will detract from the usual pride and passion that this fixture invari ably produces.

I was sorry to see Tommy McLean leave Dundee United and his departure once more highlights the tight ness of the present league set up and the tremendous pressure that is brought to bear on managers, coaches and players to get results.

In my opinion, it really is time that the powers that be looked again at easing this burden by increasing the size of the league. In welcoming United, I would like to wish Paul Sturrock and John Blackley all the best in their new posts (after today's game of course).

Their arrival will the ensure that the players from Tannadice are out to impress their new bosses which will add even further spice to what is already set to be a highly charged ninety minutes.