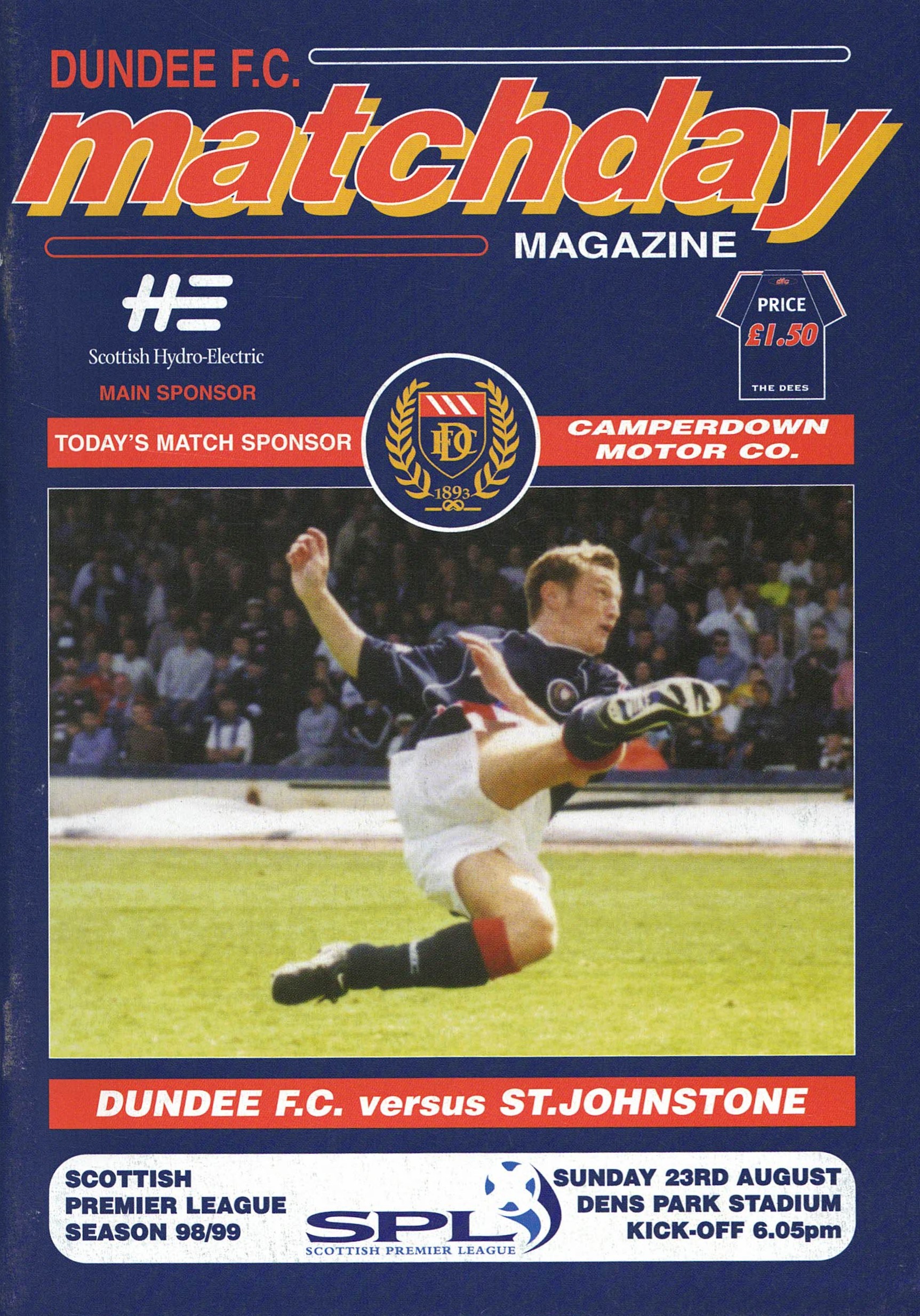 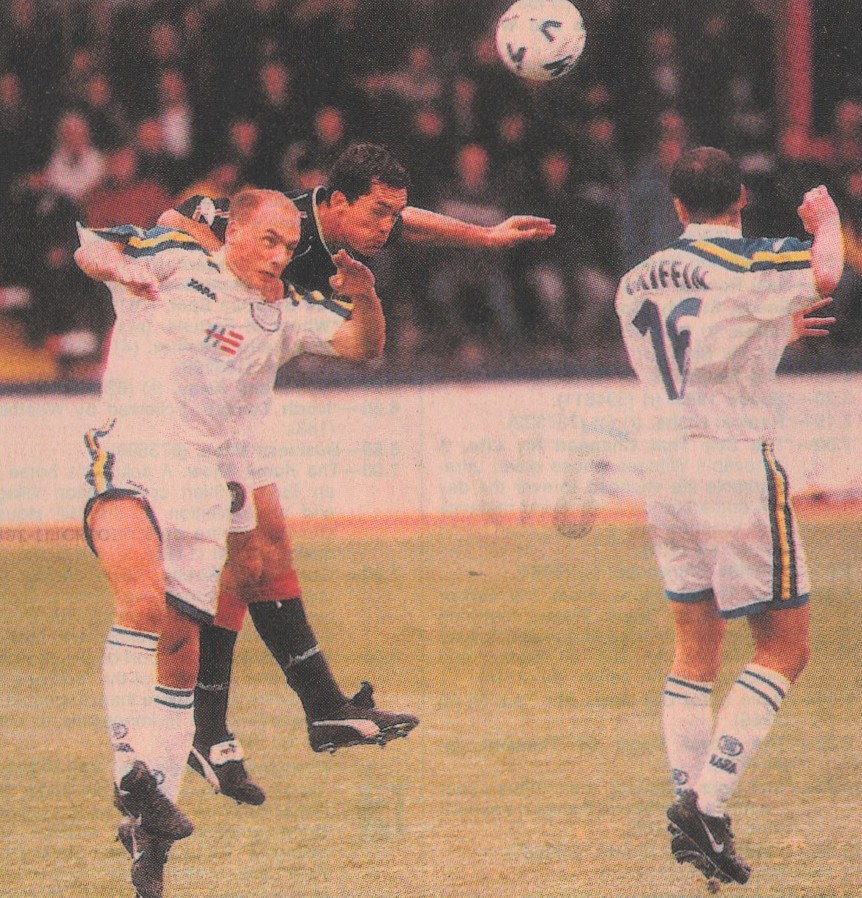 The new Scottish Premier League last night came up short in meeting the third instalment of its repayment of the £45 million, four-year investment pro vided by Sky TV.

Having seen established top-flight clubs Hearts and Rangers, then Aber deen and Celtic, fulfil the SPL's side of the deal by serving up Sunday TV treats, it befell relative newcomers St Johnstone and first division champions Dundee to continue the pay-back process. Sadly, this Tayside derby, though full of good intent and no little effort-particularly on the Dark Blues' part failed to deliver as far as quality entertainment was concerned. A nationwide TV audience saw at first hand just how far the SPL has to travel if it is to become a high standard, genuinely competitive set-up.

The fact that the only real talking point raised by the match concerned referee Mike McCurry's ordering off of Saints skipper George O'Boyle, 12 minutes from time, said everything about the football that was served up.

O'Boyle was red-carded for fending off Dundee midfielder Dariusz Adamczuk as they tussled for the ball, with the palm of his hand catching the Pole in the face. And by the letter of the law the Northern Ireland cap had to go.

There seemed little malice or real force behind the gesture, though. Both the Saints players, and manager Paul Sturrock-who had to be ushered back to the technical area by fourth official John Rowbotham after he stormed down the pitch when his captain's fate was revealed-were incensed by a seemingly exaggerated reaction from Adamczuk, who was booked for his part in the incident.

Sturrock also had to be prevented from approaching Adamczuk at full time by coach Atholl Henderson, although he later declined to comment on the merits of the dismissal on the grounds he had not had a clear view of the clash and would be waiting until he had seen a TV recording before forming an opinion.

Adamczuk declined to give his side after initially being willing to do so, his change of heart being prompted by the intervention of Dens vice-chairman Derek Souter, who advised the Pole not to comment and chastised media men for raising the subject with the player.

O'Boyle was more forthcoming, pointing an accusing finger at Adamczuk. "I don't know why I was sent off. I am in the dark," he claimed.

"He had two bites at me and I was just trying to shield the ball and feel for him. We got the free-kick and I moved away but then the referee called me back and sent me off and, when I asked him why, he just said, 'On you go.'

"The boys are telling me, though, that Adamczuk held his mouth until the red card came out then let it go and, if he did that, it is very unprofessional and not the sort of thing you want to see in the game.

"The manager hasn't spoken to me about what happened but he was more upset than I was and he probably wants to calm down first."

Losing was rough on Dundee who, with Barry Smith, Robbie Raeside and Lee Maddison in for axed pair Brian Irvine and Darren Magee, and the injured Shaun McSkimming, gave an improved account of themselves.

That is three games now without a goal or a point, however, and with their next four fixtures comprising Celtic (h), Hearts (a), Dundee United (h) and Kilmarnock (a) they could find them selves adrift at the foot of the table by the end of the first quarter.

"I thought the performance was better than it has been," said manager Jocky Scott.

"The effort was there, and at least we got the ball down and passed it. But, unfortunately, we keep giving goals away and, when we get opportunities to score ourselves, we don't tuck them away.

"I said I would like to get two or three new faces in, and the results we have had means we have to get them in now so we can give the place a lift and get things going.

"I have tried for a couple of people without success, but I will keep on trying and we will keep working hard to get it right here."

Victory smashed Saints' satellite TV jinx for, up until last night, they had not won in five appearances on the channel. But boss Sturrock acknowledged the manner of the win had left something to be desired.

"If it wasn't for the money involved I would want us banned from appearing on Sky," he joked.

"It is never a classic when we are on the box."

He added, "I am pleased with the result because it is important not to fall off the pace at this early stage and these three points get us back in the pack. But we can play better and the fact their keeper had as little to do as ours is a concern. That is just one goal in three league games for us and we cannot go through this season biting and scratching for goals the way we did last year."

Dundee, showing more passion, pur pose and better understanding than in the opening weeks of the campaign, took the game to Saints from the off and really should have turned the territorial advantage they enjoyed in the first half into a lead.

As it was, Adamczuk squandered the chance of the night when, having been left with only Alan Main to beat by a James Grady dummy, he shot wide.

And Darren Dods rode to the visitors' rescue with a terrific saving tackle to thwart the Pole, then topped it off by being first to the loose ball and ending any threat by playing it to safety off the legs of Mclnally.

On-trial Frenchman Stephane Pounewatchy did something similar at the other end, making a terrific block to deny Roddy Grant after the striker had combined with O'Boyle to get a clear sight of goal.

But St Johnstone found themselves mostly restricted to long-range shots which either missed the mark or failed to trouble Robert Douglas, although O'Boyle ought to have done much more with a great crossfield pass from Allan Preston which he lashed back across goal and out for a corner.

Dundee should have taken the lead shortly after the restart when Willie Falconer got on the end of a Lee Maddison corner. But his downward header was straight at Main who, when it bounced up off the rain-soaked surface, grasped the ball before the lurking Tommy Coyne could pounce.

With 58 minutes gone, Saints left the Dark Blues ruing the missed chances, netting against the run of play when with the home side temporarily down to 10 men due to Falconer being off the field receiving treatment to a head cut-O'Boyle knocked down a John O'Neil cross for Philip Scott to hook the ball past Douglas and into the keeper's bottom right-hand corner.

Dundee immediately replaced Coyne with Eric Garcin and pushed the recovered Falconer into attack. Then they sent on Eddie Annand for Maddison in a desperate effort to claw back a point.

But, right at the death, Saints could have snatched a second goal on the break when O'Neil picked out unmarked sub Keith O'Halloran. His diving header lacked the direction to beat Douglas.

Unfortunately, our re-introduction to the Scottish Premier League has not started as well as any of us would have hoped.

Defeats in the two games we have played have come about as the result of poor defending at the loss of all four goals we have conceded so far. All of the goals have been in the preventable category and, unfor tunately, at the other end we have been unable to open our scoring account.

So it is on these features of the game that we have been working hard on the training ground dur ing the week to correct the situation. Now we must take what we have learned in training on to the pitch on matchdays, because in this league, as we have already found to our cost, you are much more readily punished for your mistakes than was the case last season in the First Division.

Although we are all naturally disappointed at the start we have made, we cannot afford to let it get us down. And remember there is still a long way to go with plenty of time for us to rectify our position.

St Johnstone who themselves only joined the Premier ranks last season had a great initial term and are now looking to improve upon that this time round. They have some very good players including one or two internationalists amongst their playing staff, so, this evening's game will be another difficult encounter for us.

But it is match which we are eagerly anticipating and a good one for us to, hopefully, get our season started.