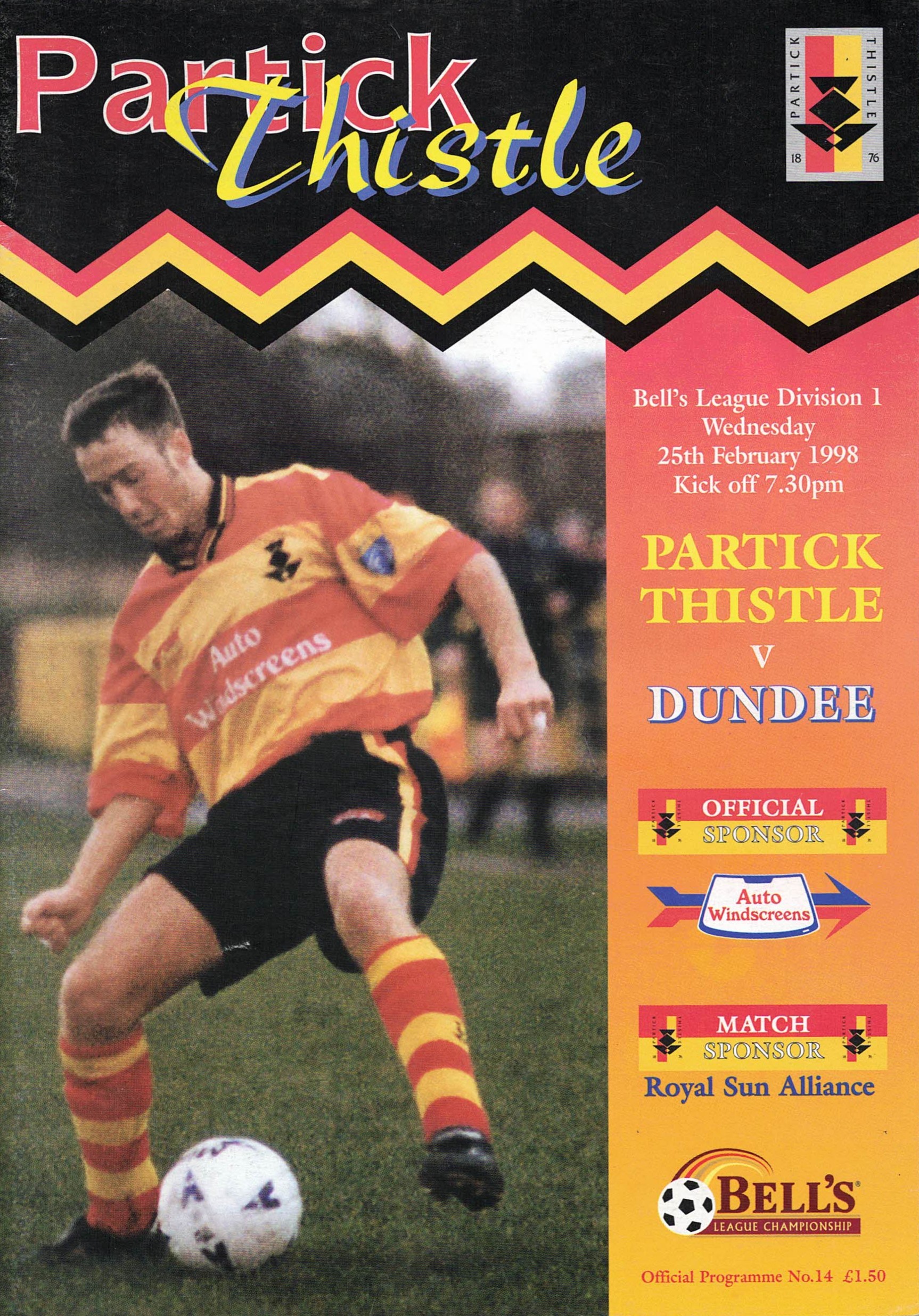 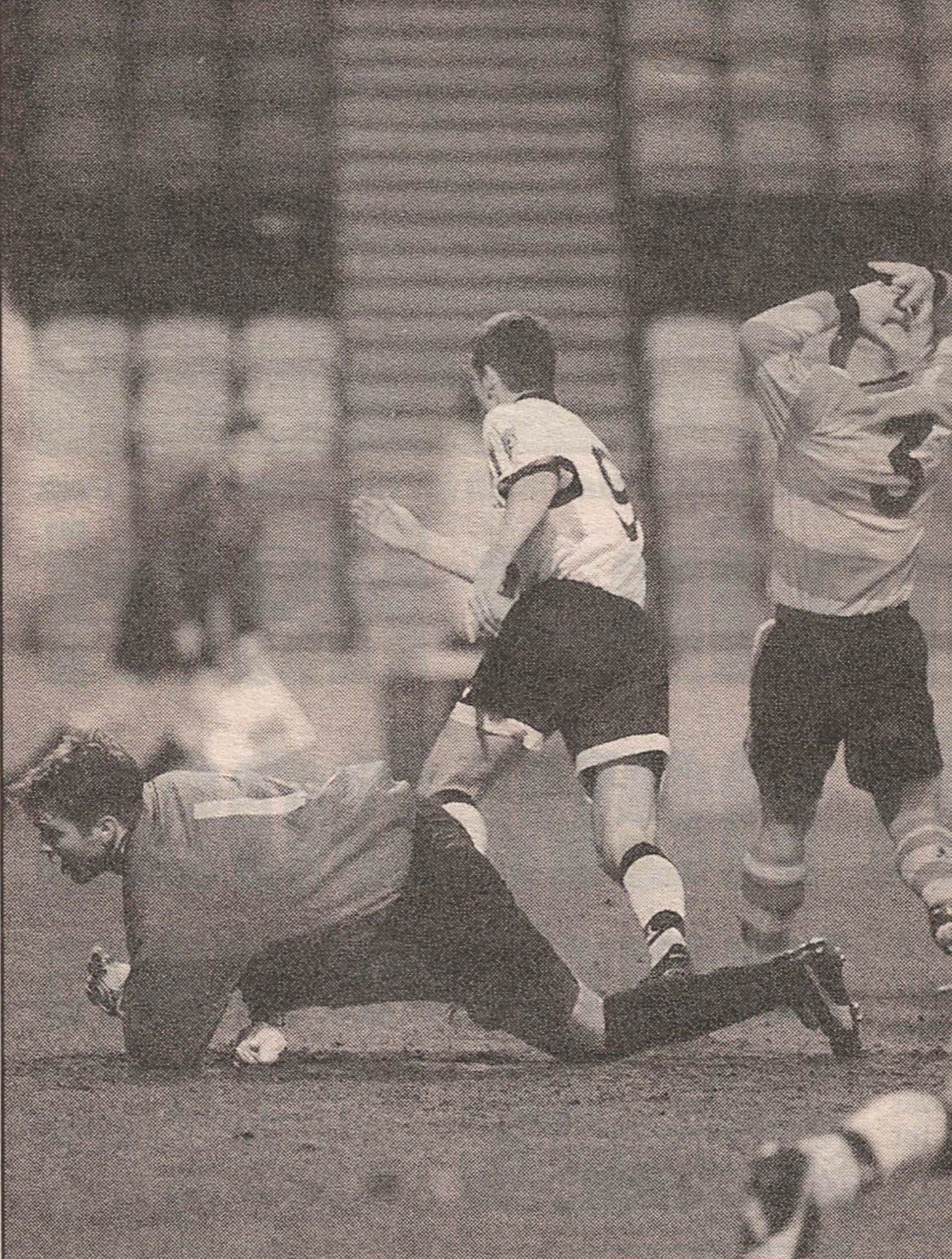 Kings of the road Dundee were made to battle every inch of the way to preserve their eight point lead at the top of the first division and the only unbeaten away record in British senior football at Firhill last night.

Organised, hard-working and committed to denying space in and around their box, Thistle showed exactly why they had held Dundee's promotion rivals Falkirk to a goal-less draw at the weekend.

But two goals. from former Jag Eddie Annand-the opener almost straight from the kick-off, the second just 14 minutes from time secured victory for the Dens Parkers, whose performance lacked nothing in effort but was far from fluent.

Debutant John Robertson, after looking a little sluggish initially, came on to a game and his contribution was certainly appreciated by a sizeable travelling support, who gave the Hearts striker a standing ovation when he went off near the end.

Manager Jocky Scott said, "A team in our position is never going to get it easy from anyone but we got the result and at this stage of the season results are what matter.

"I was disappointed that we didn't capitalise on the great start we made but to be fair to Thistle they grafted really hard and played a bit too."

Scott praised the efforts of Robertson. "I knew that having been playing in the reserves John would lack a little sharpness. But his ability to hold the ball up was a real asset, particularly in the second half."

Two-goal Annand-he has now netted four times in three starts since Scott recalled him to the side- revealed that his opening strike had been his 50th in league football since re-turning to Scotland from a spell with Sligo Rovers.

He said, "It was nice to reach that and mark but the really important thing was that we won, especially with Falkirk winning."

Dundee, with a strong wind at their backs, could not have made a more encouraging start, taking the lead with only 19 seconds on the clock.

Loan star Robertson chested down a through ball from Dave Rogers for Annand to release Iain Anderson, playing in a wing back role, on the left. And although Anderson's cross eluded James Grady, Annand arrived to head the ball home through the legs of Kenny Arthur from seven yards.

They held that advantage only until the eighth minute, however, Jamie McKenzie was able to attack the left side of the Dark Blues' defence after Rogers had failed to cut out a long ball and when his cross broke back to him off Alex Martin he steadied before sending a dipping drive over the head of Robert Douglas and into the far corner of the net.

Anderson threatened to put the visitors back in front after being put in possession by Lee Maddison but, having worked his way across the Jags' box, his power-packed shot was beaten away by Arthur, who then needed two attempts to deal with a well struck Dariusz Adamczuk effort.

Relegation-haunted Thistle, though, by no means spent the first half on the back foot and after Iain Nicolson had burst away from Jim McInally only to drill the ball straight at Douglas, the Dundee keeper showed a safe pair of hands in coping with a Lyons shot which deflected off Brian Irvine.

Partick went desperately close to nosing in front in the 65th minute when it took a superb diving save from Douglas to prevent Jimmy Boyle firing home a quickly taken free-kick awarded 20 yards out.

But that sparked Dundee into action and they claimed the points when Irvine headed on a Maddison corner for Annand to stab the ball home.

Thistle boss John McVeigh was shattered at the outcome of a scrappy match. He claimed, thought we played them off the park in the second half and the boys are gutted to have lost."

McKenzie (tripping Annand) and Steve McCormick (kicking the ball away) were booked.