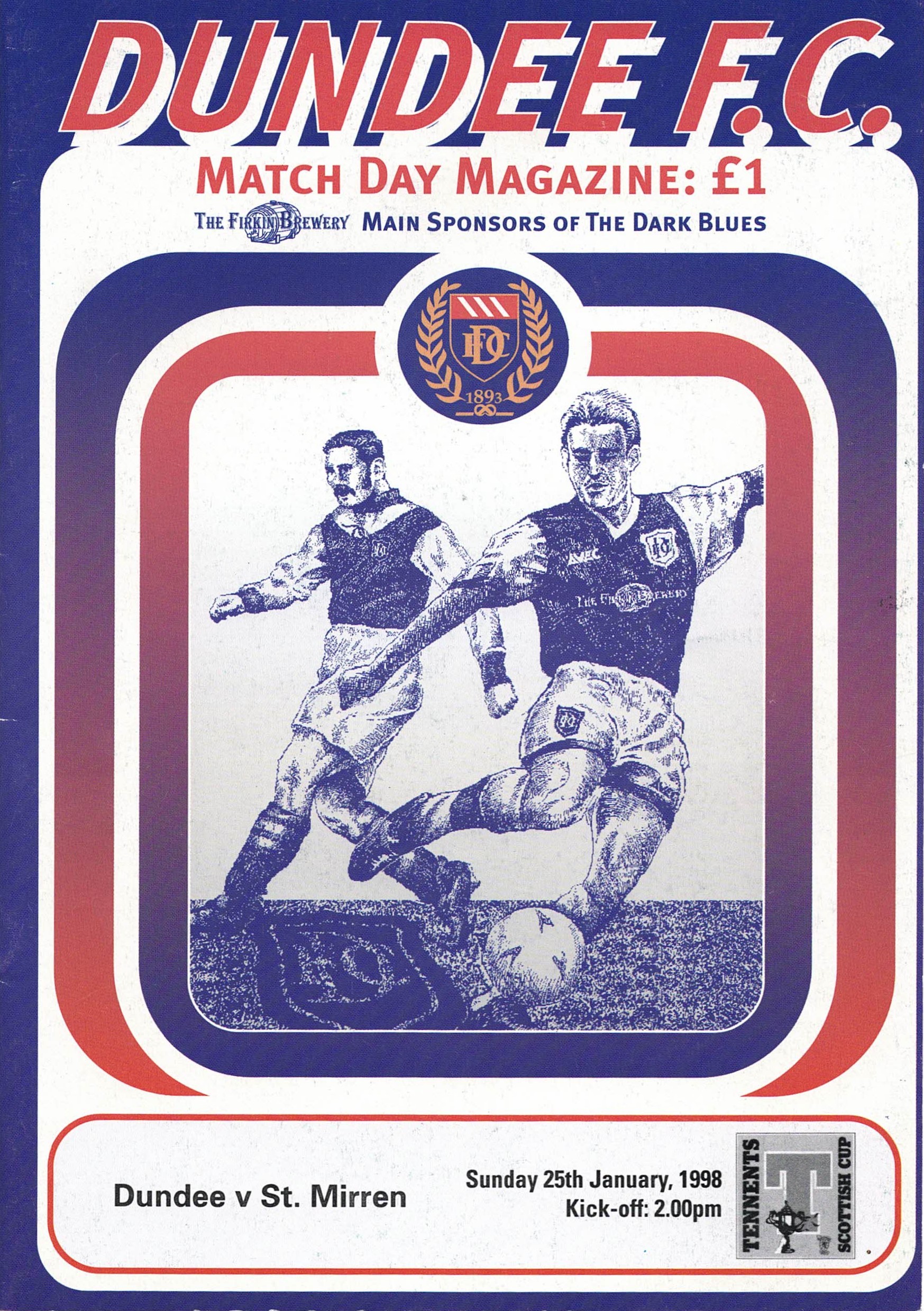 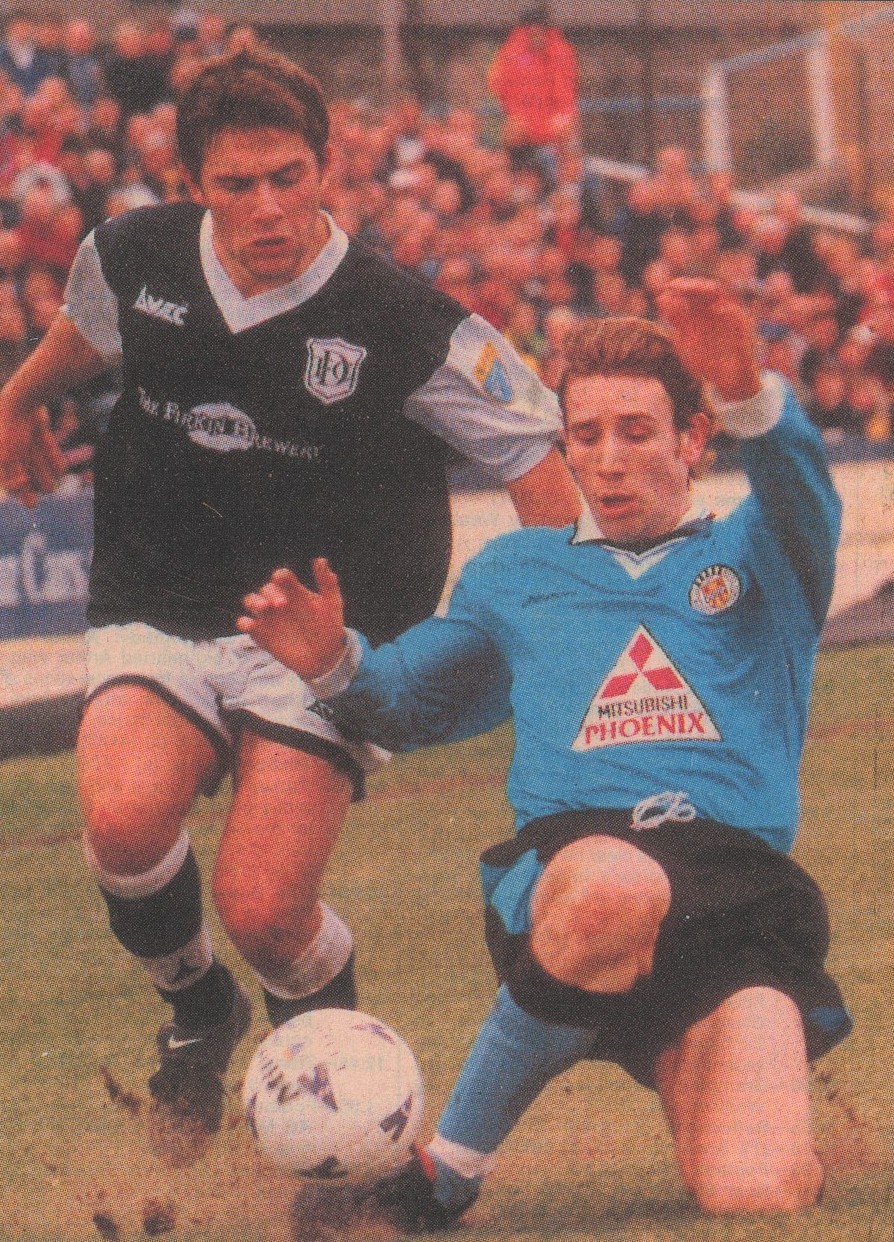 Not content with gifting the Dark Blues their opening goal the St Mirren number one got himself ordered off nine minutes from the Interval for handling outside his area.

And from 2-0 down, as the score stood at that stage, there was never any prospect of a comeback by the short handed Saints especially after their cause was further dented by the loss of Andy Roddie to another red card on the stroke of of half-time.

Against nine men this, only Dundee's second win in seven home games, ought to have been more comprehensive.

However, manager John McCormack wasn't inclined to be overly critical of his side.

"That was a reasonable performance," he reflected.

"We played some really good stuff in the first-half but then took the foot off the gas a bit and allowed our domination of the game to slip.

"In saying that, though, I don't think t the fans will have gone away feeling unhappy because there were a lot of good things about our display, especially the contribution of James Grady who was a delight to watch."

Dundee took the lead with 13 minutes gone. Lee Maddison released Steve McCormick to bear down on the visitors goal-but his half volley from 25 yards wouldn't have done any damage but for Combe completely misjudging the ball, allowing it to bounce into the net.

Seven minutes later the Dark Blues nosed further in front as lain Anderson picked out by a Jim Mclnally pass, squared for man-of-the-match Grady who took a couple of steps then steadied before stroking the ball through the legs of the advancing keeper.

Combe left referee John Rowbotham with little option but to flash the red card after he strayed beyond the left hand edge of his area and handled McCormick's attempt to find the unmarked Grady with a cross.

And Tommy Turner, who took over in goal, found himself picking the ball out of the in 43 minutes after a McCormick misskick fell to Maddison who lashed a shot high past the stand in.

You felt things couldn't get any worse for the Buddies, but with the sanctuary of the dressing room beckoning assistant referee Iain Elmslie spotted Roddie clashing off the ball with Dariusz Adamczuk and the former Aberdeen and Motherwell front man got his marching orders.

With damage limitation by now the order of the day Saints boss Tony Fitzpatrick replaced Steve McGarry with Mark Yardley, who donned the goalkeeper's jersey, allowing Turner to return to his midfield beat-and the move paid off.

With 57 minutes gone the nine men fell further behind as Grady blasted home the rebound after a Russell Kelly drive had come back off the base of the post.

But five minutes later Steve Watson headed in a Tommy Turner free-kick to reduce the deficit and a minute into injury time Chris Iwelumo got away from Dave Rogers and drilled the ball low past Robert Douglas to give the scoreline some respectability and a closeness which in no way reflected the gulf between the teams.

"To score two goals in the second-half says a lot for the character of my players because it's hard when you've lost your keeper and another man," said Fitzpatrick.

"At 3-0 down at half-time all we had left to fight for was our pride and respect to the players for the tremendous efforts they put in."

In addition to having Combe and e Roddie dismissed, Saints had Paul Fenwick and Norrie McWhirter booked and that will cost them £2500 of the sponsors payout in fines.

But Fitzpatrick had no quibble over the handling of the tie by Kirkcaldy whistler Rowbotham or his assistants.

"If a keeper handles outside the area I suppose he has to go and although we'll have to wait for the referee's report to see why Roddie was ordered-off, because I didn't see the incident, I've no complaint about the performance of the officials," he admitted.

The home trio of Brian Irvine, Rogers and Kelly were also yellow carded.

in the three matches since I last communicated to you via this column, we have remained undefeated, but unfortunately had our lead at the top cut because of the two draws against Raith Rovers and Morton.. The very windy conditions were a major factor in the meeting with Raith at Dens Park. We were a bit disappointed not to have carried on the good work against one of our main promotion rivals and know that we must put in that little bit extra effort to get back on a winning track at home in the future.

No doubt about the quality of our performance against Ayr United at Somerset Park, where despite giving the home side two goals of a start we returned with maximum points, playing some really good attractive football into the bargain. I was also very pleased that new signing Stephen McCormick found the net to take a bit of pressure off himself and will benefit him and the club in the long term..

And although I have been linked with a number of players in the transfer market. I can assure you that we are still searching to bring in new faces, but again with only one thing in mind to make sure that we stay at the top.

Last Saturday, we were held by Morton in a goalless draw. On the face of it, that may appear like a poor result against a side propping up the table. However, I feel Morton are in a false position and Cappielow is never an easy place to get full points, so taking everything including the conditions into account, a draw wasn't too bad a result.

This afternoon, we can take a breather from the pressures of our bid for promotion as we entertain St Mirren in the Tennents Scottish Cup.

It has all the makings of an excellent tie against one of the most attractive sides in the First Division.

Hopefully, the one-off nature of a cup match will rekindle our home form which too often of late has been more inconsistent than anyone connected with the club would have liked.