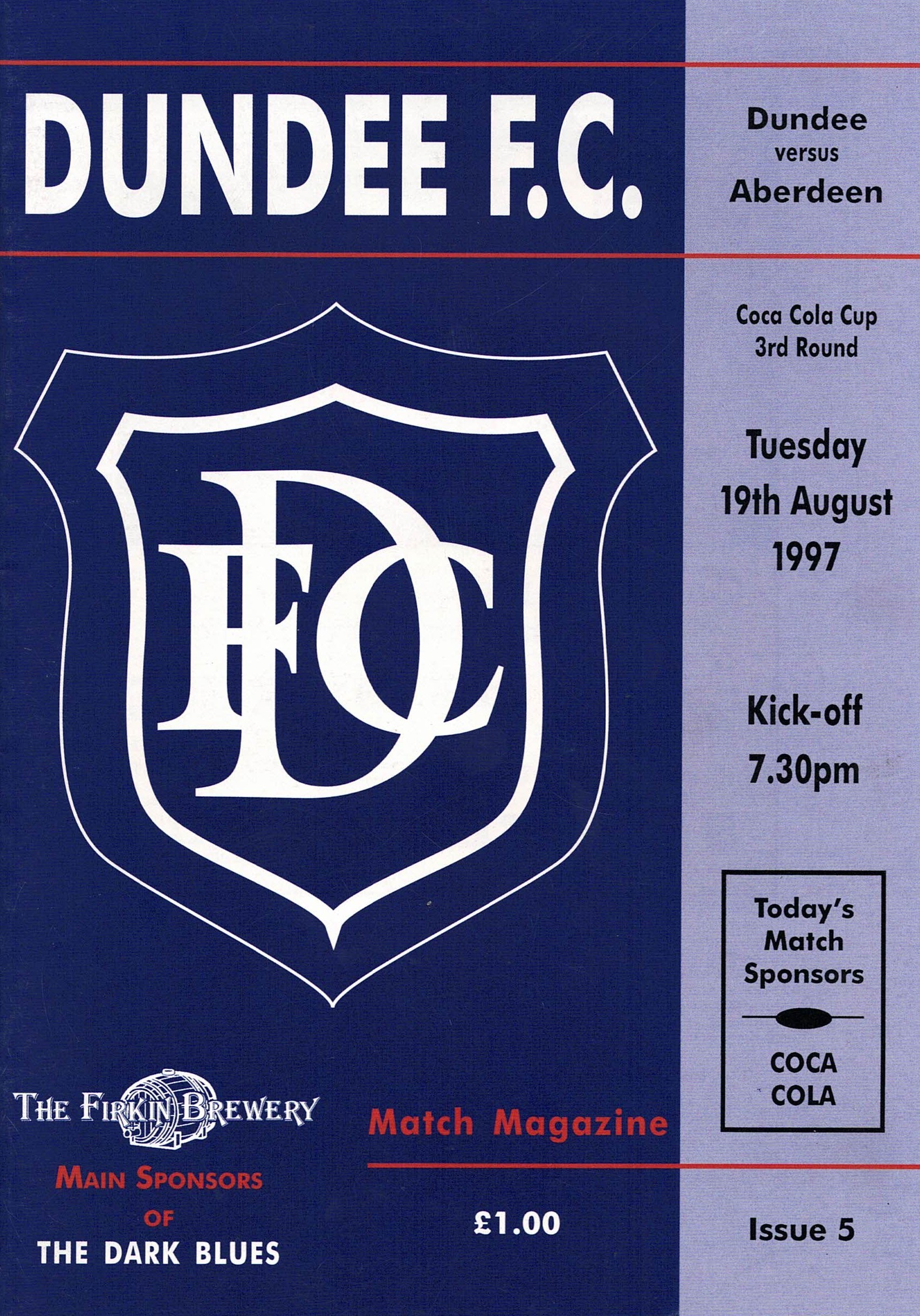 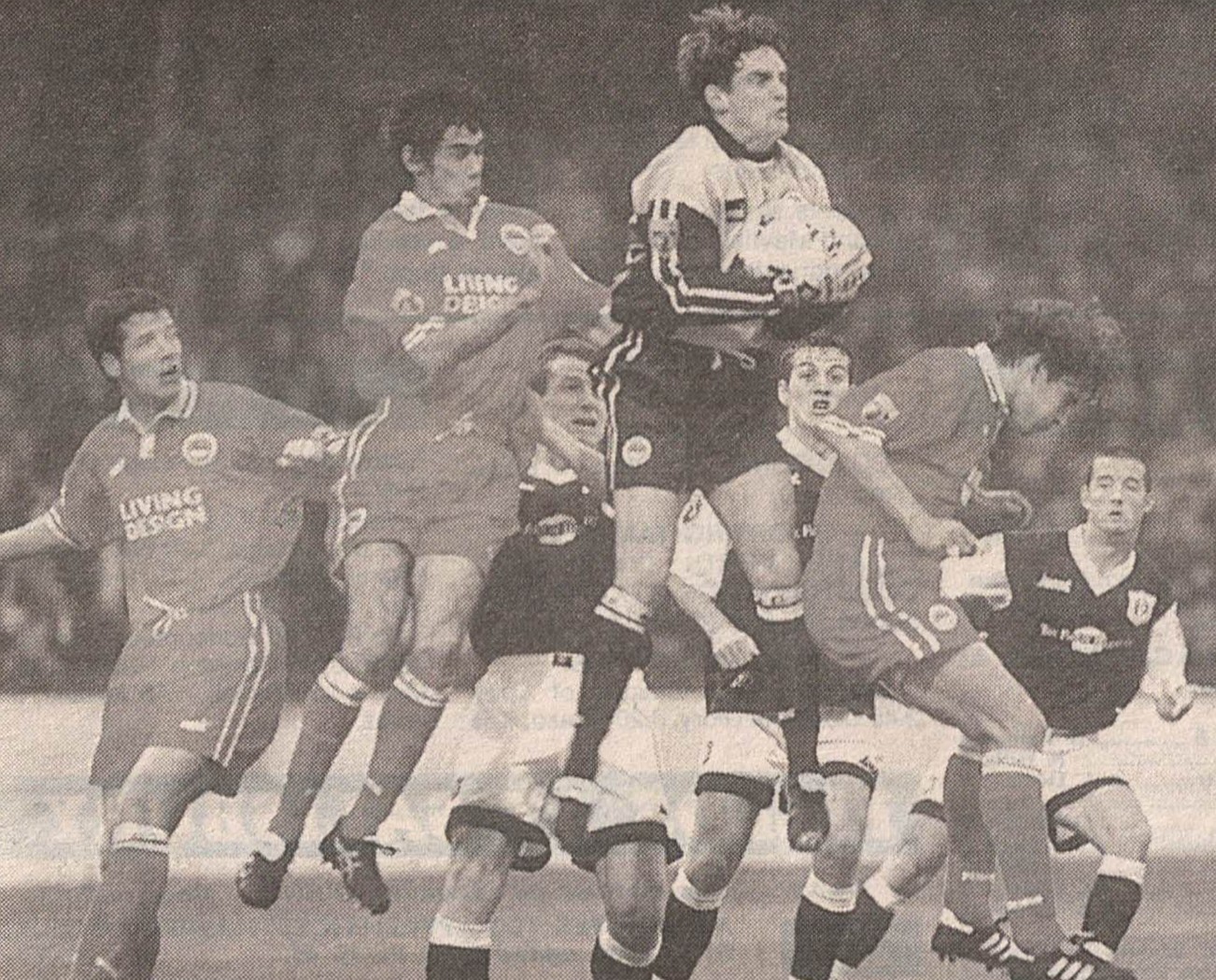 Former Dundee striker Billy Dodds came back to haunt his old club at Dens last night, hitting a double and setting up Mike Newell with a single to end the Dark Blues' interest in the Coca-Cola Cup.

The Scotland frontman was making only his first start of the season for the Dons but showed no signs of ill effects for his spell on the bench with a sparkling display that rightly earned him the man-of-the match award.

He was the difference between the teams as Dundee, who accounted for Aberdeen in the same competition last season, put up a good fight before going 2-0 down, hitting both bar and post.

"They played really, really well and showed us the stan dard we have to aim at.

"The Dons may have lost 4-1 on Saturday to Hearts but there was never any question that they had the quality.

"Having said that, though, the goals we lost were bad ones and there are elements of our play we must work on.

"I have said before that I am still trying to strengthen the squad and will continue to do that until I am satisfied I have the players to compete in the top flight."

Aberdeen boss Roy Aitken praised his side for the way they responded to their Tyne castle thrashing and said the performance of Dodds in particular had been exactly what he was looking for.

"I'm pleased with both the attitude and commitment that was shown," he said.

The tie got off to a lively, if robust, start and was to continue in the same vein throughout.

With only 180 seconds gone Russell Anderson re quired treat ment after a clash with Eddie Annand and Paul Bernard was booked a minute later for lifting his foot in a challenge with the Dundee striker.

Dons keeper Derek Stillie did well to keep his eye on Lee Maddison's effort from the edge of the box after it was deflected. At the other end, Robert Douglas produced a succession of stops to deny both Dodds and Newell.

With the latter sending a rebound off the post and Iain Anderson crashing a glorious 20-yard drive off the Dons' crossbar, it wasn't so much if a goal would come but when. The 17th minute was the answer, Aberdeen taking the lead with a score the home defence will be happy to forget. First Dodds, just 5 ft 8 in tall, was left in splendid isolation to get on to the end of Joe Miller's cross from the left, then Douglas got his hand to the header only to push it into his net.

Dundee rallied and were unlucky not to get a quick equaliser 15 minutes later when they put together a great move that took them from one end of the pitch to the other. Barry Smith found Maddison galloping down the left with a measured 30-yard pass and from the Englishman's cross James Grady went close with a diving header.

Grady, booked earlier for a foul on Jess, looked set to be sent off just before the break when he was involved in an incident with Stillie but referee Kenny Clark was more interested in teammate Jim McInally's reaction, running in to grab the Aberdeen keeper by the throat.

McInally got a yellow card for his trouble and both Stillie himself and O'Neil were also booked for their protestations.

Annand then caught the Dons' defence out when he raced on to Anderson's cross to lash a shot off a post.

Dundee struggled to pick up the tempo on their return and in the 60th minute their cause was further set back by the loss of a second goal.

Dodds made his way in from the wing past both Anderson and Dariusz Adamczuk before smashing the ball past Douglas from 12 yards.

To their credit Dundee re fused to give up, Anderson bringing out a full-length stop from Stillie with a 30-yard shot. McCormack sent on all three of his subs in an effort to bring about the breakthrough but it was Aberdeen who added to their tally, Newell running on to Dodds' header in the 80th minute to slot the ball into the corner of the net.

For the third year running the Coca Cola Cup has pitched against Aberdeen. We have had some great games with the Dons and after losing in the final to them two years ago, we came out on top twelve months ago to book a semi-final place against Hearts, so at the moment the score in these recent encounters stands at one a piece.

As you can imagine, everyone at Dens Park is very much looking forward to this evening's tie and let's hope that we are still in the hat for the next round after Aberdeen's visit.

Certainly we will have to improve on our performance in the last round when it was East Stirling who emerged with most of the credit. Whilst we created chances, we put pressure on ourselves by not putting them away, but sheer perseverance got us through and in cup football, it is the result which counts.

Unfortunately, I can only confess to being very disappointed at the manner of our defeat at Broadwood by Airdrie in the League Challenge Cup. I can only apologise to the fans for what was a well below par performance.

Hopefully, I think we went some way to redeeming ourselves in the eyes of the fans by victory, and the manner of it, at Firhill, because our supporters are very important to us.

I thought we were tremendous in the 3-0 defeat of Partick Thistle and I am hoping for a repeat performance against Aberdeen, because we fully realise how hard a cup tie is in prospect, especially as our visitors will be galvanised by their weekend defeat at Tynecastle.