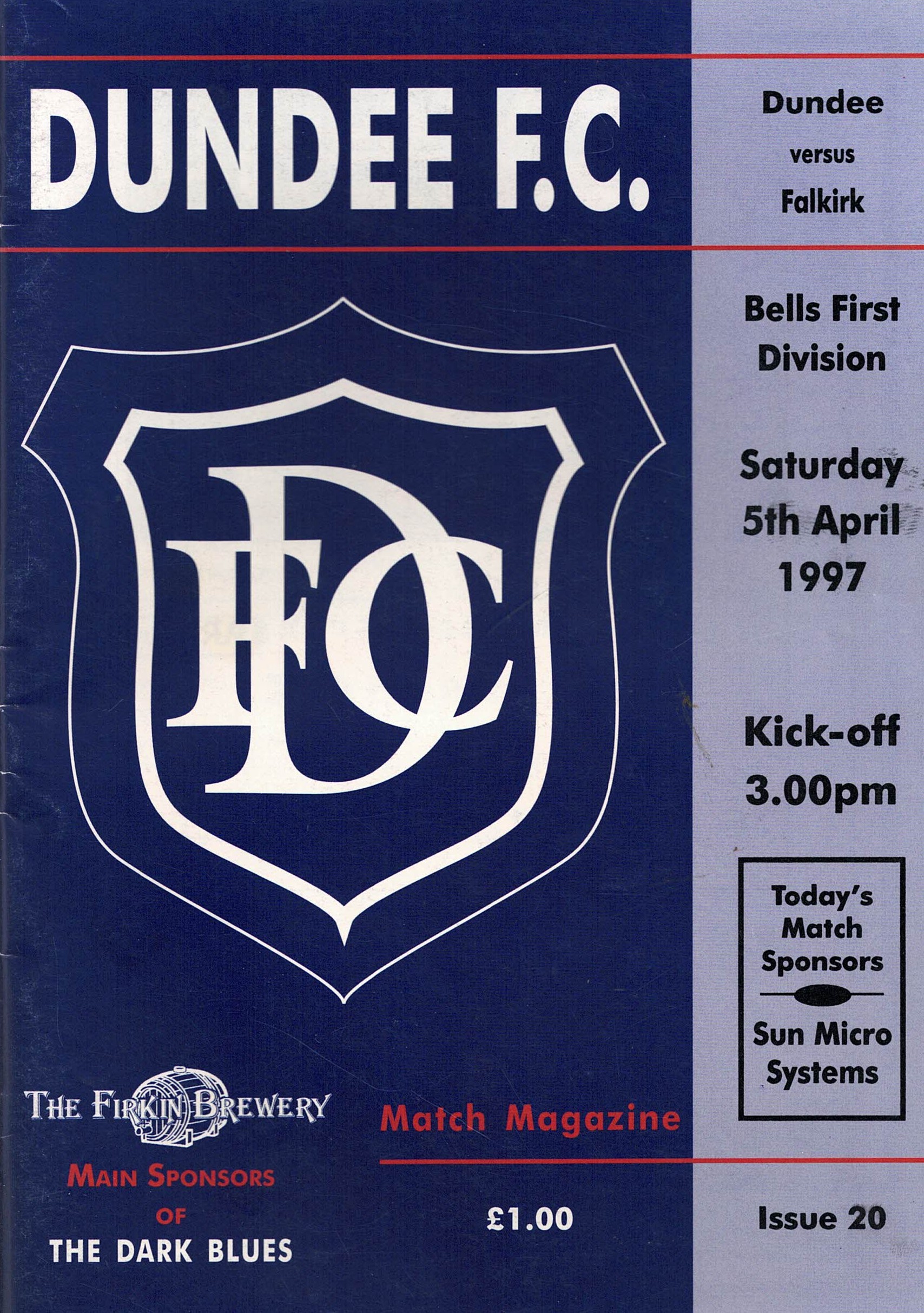 Jamie McGowan can hardly wait for next week's Scottish Cup battle with Celtic.

And, at the same time, give his side the perfect tonic for the semi-final showdown at Ibrox.

Two identical second half goals by McGowan - from Kevin McAllister free kicks - saw off the Dens men and now he believes the Bairns are up for the Cup.

"We will be going to Ibrox to win, and hopefully, I will be able to get another couple, like today. "I always score two goals a season, so I hope that's not my quota over for the year.

"Next week is a great chance for us, even though Celtic are way above Dunfermline and Raith whom we have beaten already.

"Everyone is up for it, and can't wait for Ibrox" he said.

Yesterday's win kept up a great run for the Bairns, who have been beaten only twice in the last 13 games.

Despite Dundee enjoying the lion's share of possession, it was the deadly double act of McGowan and McAllister which stole the show at Dens.

In 68 minutes, Brockville cult hero McAllister swung a menacing cross to the head of McGowan, who rose to bullet the ball past Gary McGlynn.

Then sensationally, two minutes later, the deadly duo struck again with a carbon copy of the first.

Crestfallen Dens boss John McCormack, who watched his side fall five points off Airdrie in the promotion chase, blasted his defence.

"I am very disappointed at the unprofessional way we lost the goals from two set pieces.

"All credit to Jamie for his two goals, it is a case of him coming back to haunt his old club.

"At the second goal, Robbie Raeside tried to keep the ball in play with his arms.

"Now we have got to lick our wounds and go to Airdrie and win. It is make-or-break."

Dixon's £4.5million majority share in Dundee is expected to be taken over by Peter and Jimmy Marr this week.

Annand was giving a painful introduction to the First Division in 16 minutes with Falkirk's Neil Oliver being booked for bowling him into the dug-out.

Annand's miss on the hour, when he shot too straight at Craig Nelson probably turned the game. But Falkirk deserved their win, and boss Totten said: "Winning is a great habit.

"That's the first time the boys have beaten Dundee this season. They worked very hard for it." 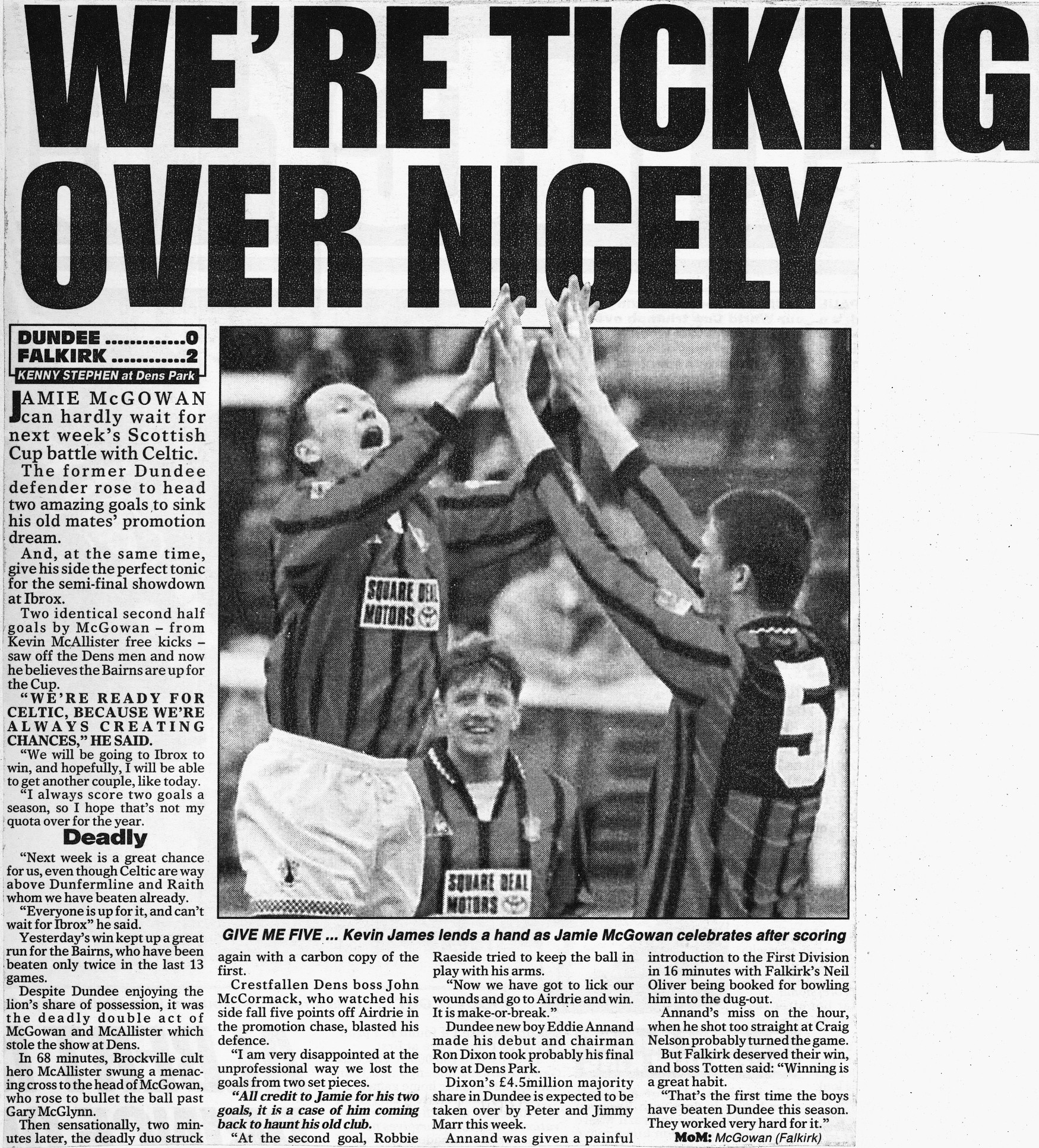 Although the results of our last couple of games may have been a bit disappointing, I can have no complaints at the attitude shown by the players. It has been superb.

Unfortunately, we are a lacking a little bit in technique and ideas just now and as a consequence the goals have dried up.

We are still creating chances, but not enough to produce the goals we need. Obviously the sale of Paul Tosh and Lee Power has made our first team squad a bit tight.

However, their departure was in the club's best interest. One of the players had indicated that he was going to move abroad next season in which case we would not have received a penny for the loss of his services.

As you know we did try to spend some of the cash we got from Hibs, but it didn't happen. I thought the player concerned could do a job, but it is equally important that we get the right type of player in. That is one who wants to play for the club as well as enhancing our present squad.

It is my hope that I have been able to do that before last Monday's transfer deadline. As we reach the climax of the promotion campaign, all I would ask is that you get right behind the team. And if they give their all and at the end of the day we aren't good enough, then so be it. But I can assure you that I will continue to strive for success.