Dundee's Coca-Cola Cup challenge last night fizzled out at the semi-final stage. The Dark Blues' brave bid to reach the final for the second year running was undone by Premier League Hearts who thanks to goals from Darren Beckford, Colin Cameron and man of the match Stephane Paille will face Rangers at Celtic Park on November 24 in a re-run of last term's Tennents Scottish Cup final.

But in truth it was a largely self-inflicted defeat for Jim Duffy's men.

That Dundee exited the competition when within touching distance of getting another crack at the trophy wasn't down to lack of effort-they gave everything they had and then some.

However, for as hard as George Shaw, Jim Hamilton, Paul Tosh and Darren Magee grafted up front they were never going to repair the damage done at the other end where the defensive frailties which cost the club three league points against Partick Thistle at the week end again reared their head.

"I'm very disappointed to have been knocked out" commented boss Duffy.

"I don't want to take anything away from Hearts, I wish them the best for the final, but we gifted them a two goal start and left ourselves in a very difficult position.

"I give a lot of credit to my players for their second-half performance. They gave everything they had to offer but we made crucial errors at vital times in the match and that's why we are out.

"Overall I've no complaints though. We've had a good run and now we've got to pick ourselves up for the league."

Dundee's cup final dream was effecltively dead and buried inside half an hour by which time they were 2-0 down. Both goals were a personal nightmare for right-back Dariusz Adamczuk.

Firstly, with 20 minutes gone, the Pole was caught wrong side of Hearts winger Stuart Callaghan as Dundee's defence was opened up by a long punt from Gilles Rousset.

The Pole nearly redeemed himself by recovering to toe poke the ball back to keeper Billy Thomson before Callaghan could shoot-but Thomson, fearful that to make a catch would be to concede a free kick under the pass-back rule, opted to parry and although he managed to block substitute Beckford's first attempt to tuck away the loose ball he was helpless to prevent Beckford, who had replaced the injured John Robertson, from netting at the second time of asking.

Ten minutes later Adamczuk's misery was complete as he misjudged a challenge on Callaghan, catching man instead of ball and conceding a penalty kick which Cameron converted with little fuss. "

The first goal was bizarre," observed Jim Duffy. "Tommo was caught in two minds over whether it would be construed as a pass back. He realises now he did the wrong thing.

"The penalty was down to a needless challenge, and it's always difficult to accept losing goals like these.

"But although we were a bit nervy defensively I thought Craig Tully came into that area and didn't put a foot wrong all night."

The spot kick concession was particularly hard on the Dark Blues for they had recovered well from the opener and gone close to equalising through Shaw and Tosh before Cameron struck.

There was worse to come for them with 59 minutes gone-having been pressing hard to get back into what was a pulsating game-they were caught on the counter.

Callaghan, who turned down the chance to join Dundee as part of the Neil McCann transfer earlier this year-began the move by feeding Neil Pointon on the left. When Pointon's lofted through pass was knocked down by Beckford, French striker Paille came steaming in to prod the ball passed the helpless Thomson.

The tireless Hamilton nearly pulled one back in the 72nd minute when he got on the end of a low cross from substitute Magee, only for Rousset to deny him from point blank range. However in the Dark Blues' next attack Hamilton did find the net, poking the ball under the keeper-for his first goal of the tournament-after an Adamczuk cross had sparked off a goalmouth scramble.

The slender hope that strike provided them with encouraged Dundee to redouble their efforts to rescue a seemingly impossible situation. But, despite dominating the remainder of the tie, the nearest they came to scoring was when a curling Magee cross came back off the face of the crossbar with Rousset beaten.

Hearts' last top final clash with Rangers of course ended in a humiliating 5-1 thrashing five months ago, but boss Jim Jefferies reckons they are now better equipped to tackle the Ibrox side.

"If we are to be considered a big club we need to win trophies.

"Now we've got to look to go one step further than we did in the Scottish Cup."

Just one player-Callaghan for pulling back Adamczuk-was booked in a keenly contested match. 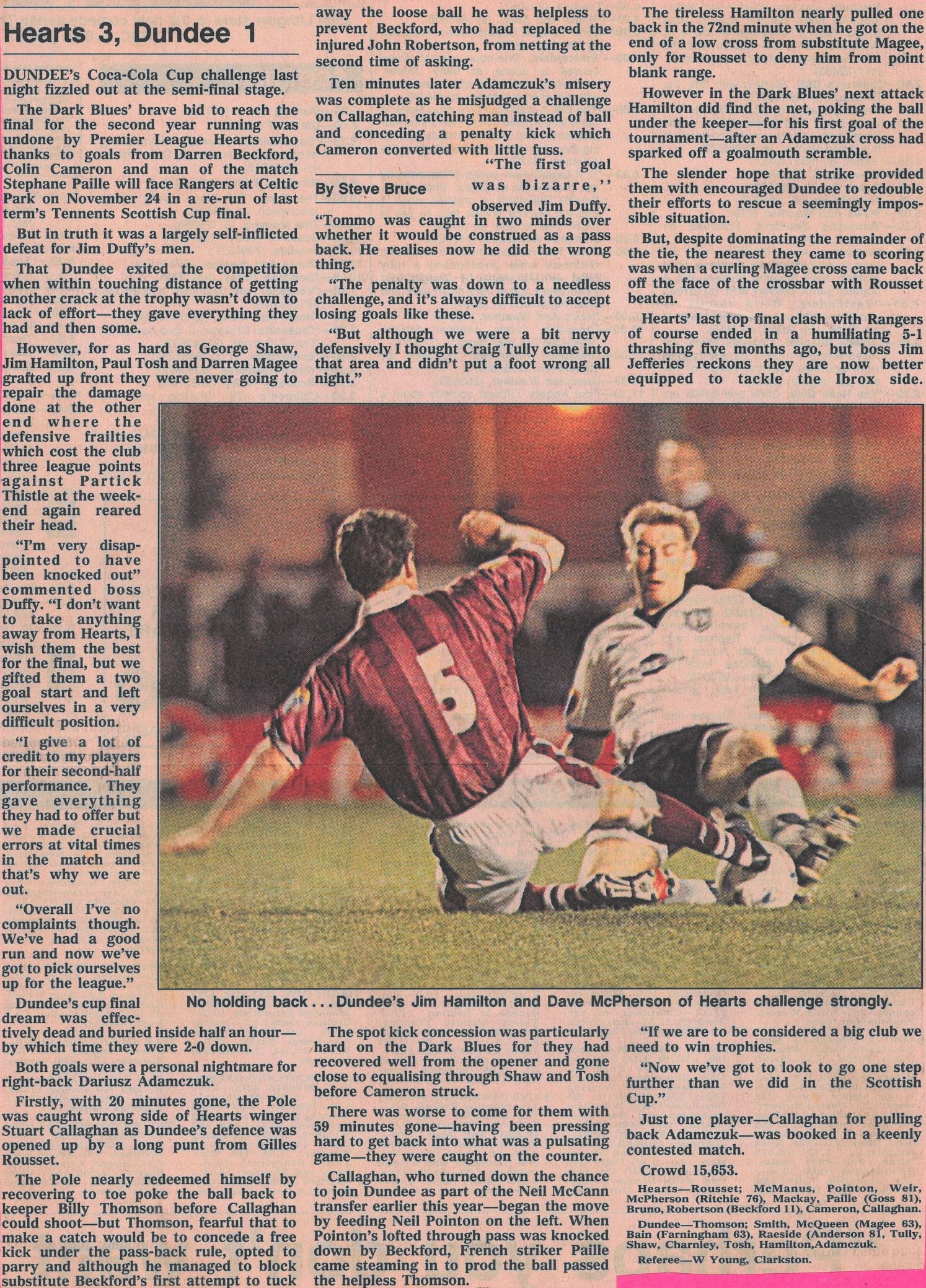