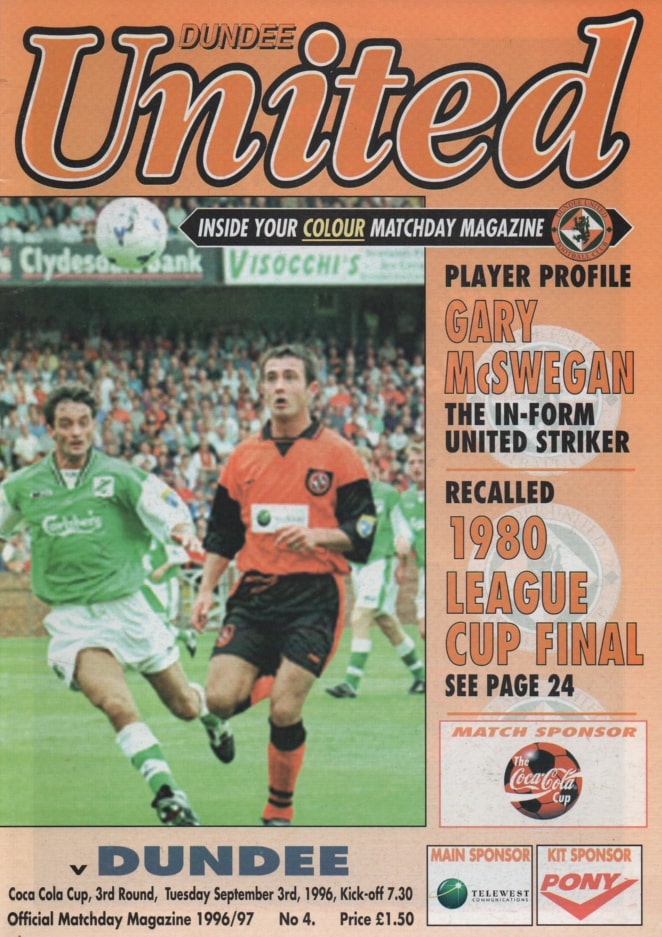 Veteran goalkeeper Billy Thomson last night claimed his place in Dundee derby folklore as he twice saved from the penalty spot to send first division Dundee into the quarter finals of the Coca-Cola Cup at the expense of his former club United.

The 38-year-old keeper, signed on a free transfer from Rangers less than a month ago, had looked like being the villain of the place after he marked his return to Tannadice, where he spent seven years during the 1980s, by gifting the Tangerines their first goal.

However, during the nerve-jangling spot-kick shoot-out which was required to settle this rip-roaring third round tie he produced a couple of terrific stops to deny Owen Coyle and Gary McSwegan and take last year's beaten finalists Into the last eight of the competition.

Thomson's heroics climaxed a quite magnificent match containing sufficient good football, excitement and talking points to ensure it will live in memory, certainly of Dark Blues fans, for some time to come.

"That was an absolutely magnificent game," reflected Dens boss Jim Dufty. "To say It was end to end stuff would be the understatement of the year.

"I would have been proud of our performance even If we had lost but winning makes it all the sweeter.

"After all the upheaval we went through with people leaving during the summer this display will, I hope, convince the fans, and more importantly the players, of the ability we'll have at the club.

"Billy Thompson was absolutely magnificent but there were a lot of great performances from my players, and it Is not often a manager can say to his team 'well done' and not temper that praise with even a slight moan."

Thomson's slip up had appeared to hand United the initiative after an evenly contested opening 20 minutes.

Thomson, who had earlier distinguished himself in beating away a well struck Dave Bowman effort, really ought to have swallowed up a McSwegan drive from the edge of the area but he allowed it to cannon off his chest and Coyle latched on to the loose ball to open the scoring.

Six minutes from the break, though, the Dark Blues levelled in controversial circumstances.

Premier league United, down to 10 men due to Robbie Winters being off the field having a head gash stitched, looked to have escaped an equaliser when Ally Maxwell brilliantly turned over a dipping George Shaw half volley from a cut back Chic Charnley corner the keeper had needlessly conceded.

However, as they moved to meet the resultant Charnley flag kick, Mark Perry was ruled by referee Willie Young to have shoved Robbie Raeside off the ball and although Maxwell got his hands to Jim Hamilton's spot-kick he failed to keep it out.

The first-half had been typical derby fare — fast and action packed but with clear cut openings somewhat limited, albeit Shaw and Coyle wasted a chance apiece.

From the break, though, the protagonists returned to create enough openings to have yielded a hatful of goals.

For United, McSwegan squandered a fine chance by failing to get sufficient purchase on a Jamie McQuilken cross while Thomson atoned for his earlier error with excellent stops to thwart Neil Duffy and McSwegan (twice).

And for Dundee, a looping Hamilton header brought a terrific tip over save out of Maxwell, while Shaw wasted a wonderful opening by lashing a clever Tosh cut-back over the bar from close range before almost catching Maxwell out from 20 yards after intercepting a poor clearance by the keeper.

The advent of extra-time if anything brought an increase in the entertainment level.

On the restart Hamilton headed a Charnley corner against the face of the home bar, then when play swung to the other end McSwegan rattled the inside of Thomson's right hand post.

And the drama continued apace, Coyle blocking a Raeside header on the line and Thomson stretching to touch away a 30-yard McSwegan free-kick before with 97 minutes on the clock Dundee nosed in front as Hamilton grabbed his second goal of the night, deflecting a low Kevin Bain shot past the diving Maxwell.

Thirteen minutes later, though, McSwegan latched on to a Winters through ball and netted via the inside of an upright to force the penalty kick decider during which the Dundee quartet of Charnley, Tosh, McKeown and Ferguson all converted as did United substitute Ray McKinnon and former Dens Parker Duffy.

However, in addition to being just about the only person in the ground to spot the infringement which led to Dundee equalising, he failed to take action over the second most contentious moment of an action packed tie when Chic Charnley - who had lit up the opening half hour with some superb touches - caught McSwegan across the face with an outstretched forearm as the pair tangled in midfield.

The mercurial midfielder - twice ordered off against United last season - looked sure to be in serious trouble once again but having allowed both players to receive treatment, Young, who it can only be assumed had completely missed the incident, left his cards in his pocket and restarted the game with a bounce up!

United were left fuming over both decisions but manager Billy Kirkwood was equally angry about his side's display.

"I think it would be fair to say that every one of my players let their team mates down at some stage of the match," he said.

"Without playing that well I thought we deserved Gary McSwegan's extra-time equaliser. But Gary could have had four or five goals tonight and as a team we just didn't make things happen for ourselves." 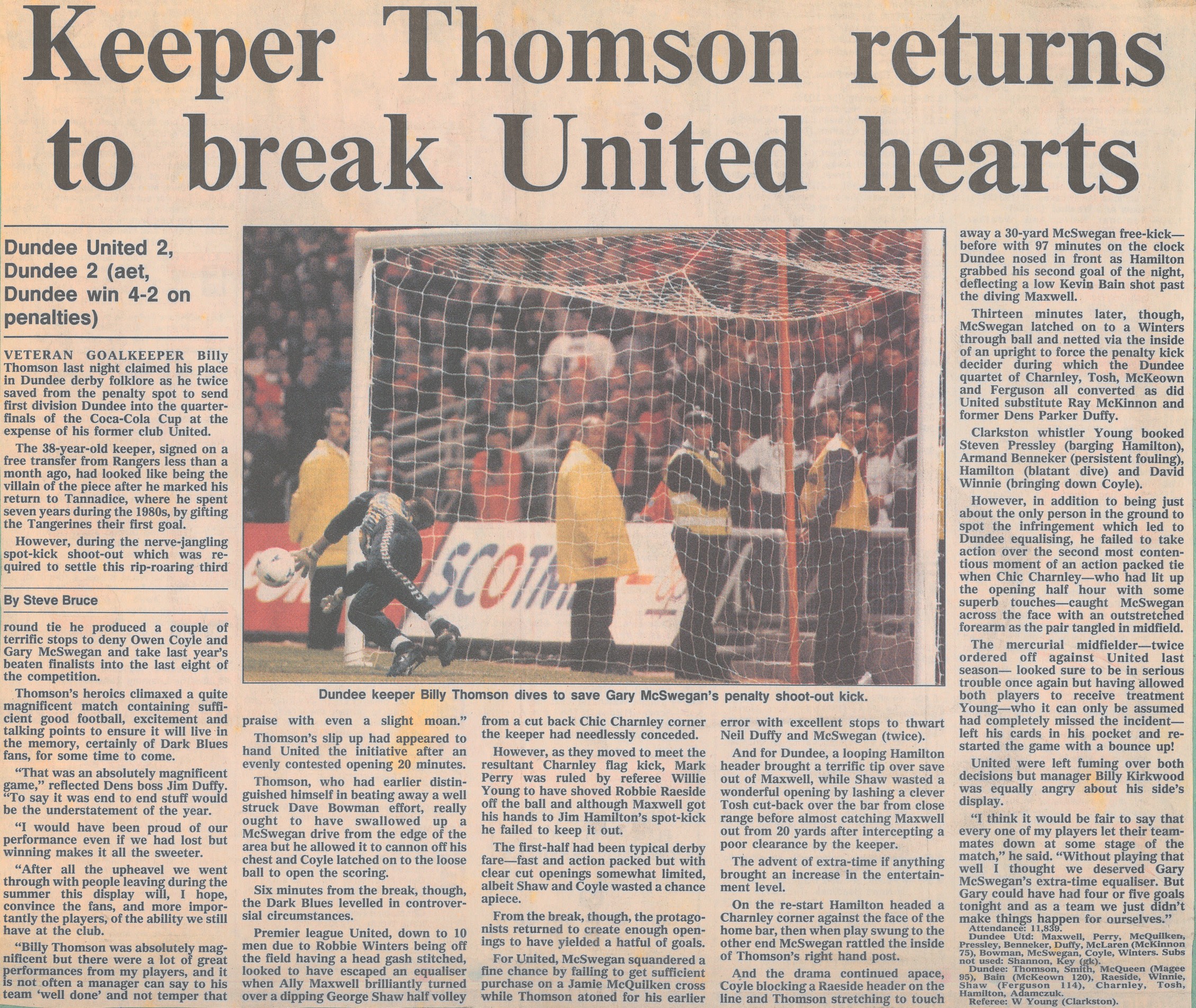