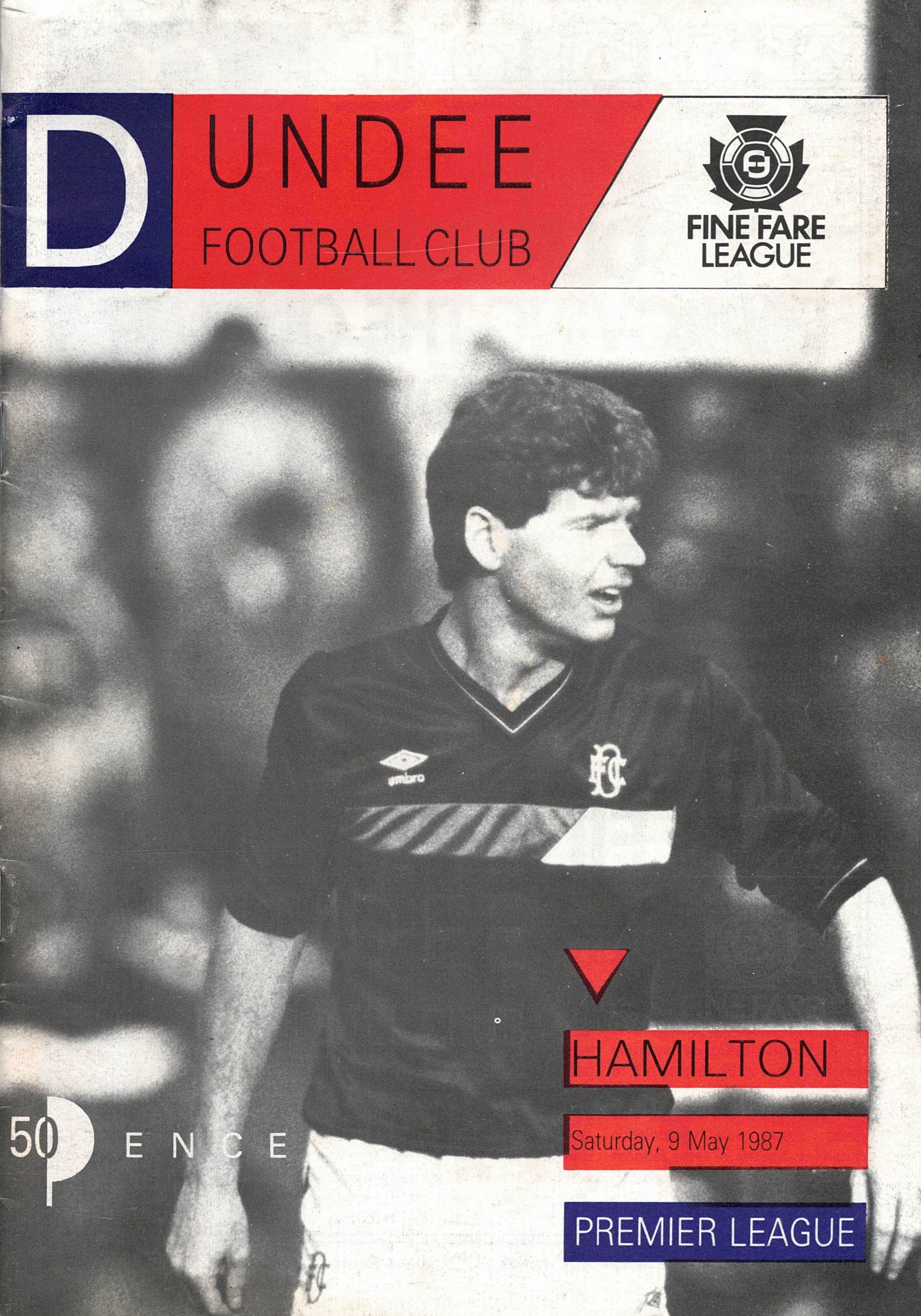 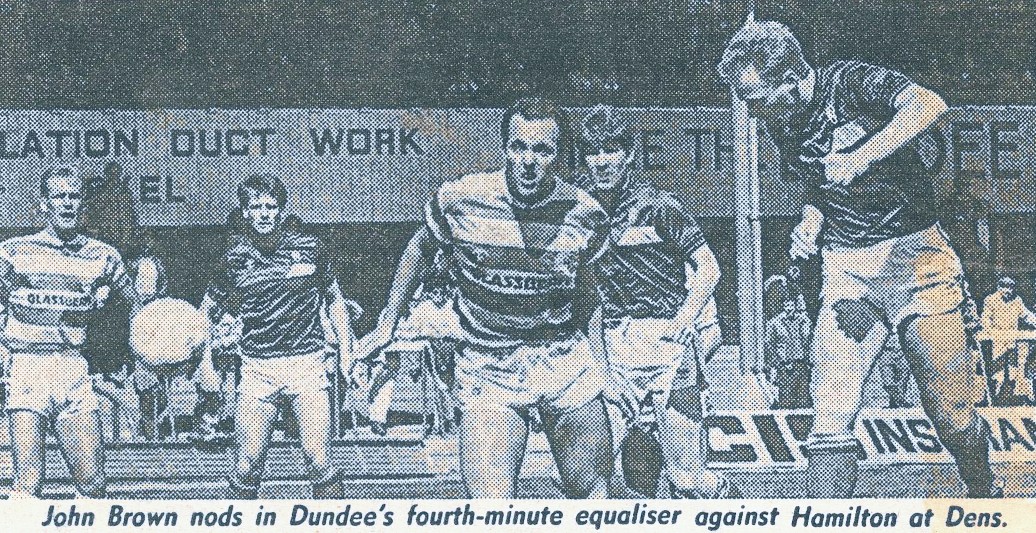 Steve Campbell plays his first game of the season for Dundee, replacing the suspended Jim Smith. Relegated Hamilton have three teenagers in their recast side Gerry McEwan, Jim Weir and Willie Dunlop.

Dundee get a shock in two minutes when Hamilton take an early lead. McEwan floats a free-kick on the breeze and COLLINS is unchallenged as he heads into the corner from close range.

In four minutes Dundee are level and again the move starts with a free-kick when Camp bell is fouled. McKinlay sends the kick across goal and BROWN'S head glances the ball neatly into the net to score against his former club.

Dundee move the ball across the front of the Accies' penalty area in a four-man move. Wright is the fifth man and he turns quickly to lift a left-foot shot over keeper Ferguson and over the bar.

A sharp move by Jamieson and Dunlop creates an opening for Hamilton which looks promising until Forsyth forces Dunlop to run the ball of play.

Duffy goes down in a heap off the ball and still looks groggy after lengthy attention. Shannon is put through in the Hamilton penalty area but runs straight into a three-man Accies' wall which proves too much for the Dens man.

Wright is fouled just outside the penalty area and the situation is perfect for Brown. When the ball is touched to him he hits a left-foot shot which bends round the defensive wall and is going in at the post until Ferguson dives to push the ball away.

That sets things up for WRIGHT who has taken perfect position and hits the ball into the net from close in.

Accies are being contained in their own half for long spells. But Sprott breaks at speed and crosses low in front of Caughey who is inches from making contact when Geddes dives to grab the ball.

Back race Dundee and a clever header by Brown gets the ball to Coyne on the right. He crosses to the far post where Shannon slides in and fails to make contact.

Campbell pulls Caughey off the ball and McEwan's free kick is again sent to Collins. This time the Accies' skipper is well watched and Geddes grabs the ball in the air.

Jamieson breaks clear and, while Collins creates a diversion with a run from the other side of the penalty area, he hits a low shot which Geddes does well to hold.

The Dundee keeper does not get to a Sprott shot which touches the near post and goes past.

Hamilton are level in 41 minutes when Dundee lose another bad goal.

This time a poor clearance by Geddes goes to Jameson who returns the ball quickly to CAUGHEY. He forces it past Geddes and walks after the ball as it rolls into the net.

A minute later Dundee are in front again. A cross from the right creates a scramble in the goal area and SHANNON knocks the ball into the net.

Reflections - Goals are cheap today. Dundee have done well to hit four but the defence have slipped up badly to lose two.

Ferguson does well to push out a good effort by Rafferty and the ball does not run well for Coyne who is well positioned.

A 30 yard free-kick by Brown has lost pace when it gets through to Ferguson.

Duffy has to head a Jamieson cross over his own bar.

When the corner is cleared Campbell releases Coyne who rounds Ferguson, then finds he has no angle for a shot. Trying to cut the ball back he sends it straight to the keeper who is scrambling on his knees.

Coyne dispossesses McEwan on the edge of the box and desperate measures are required from other defenders to clear the danger.

Dundee send on Harvey for Shannon, who is hurt, and Accies substitute McKee for Dunlop.

Harvey immediately miss hits a shot to send a tame ball to Ferguson. Then Wright is through and his shot hits the keeper to go wide.

It's all Dundee and the race is on between Coyne and Harvey to finish club top scorer for the season.

HARVEY is one ahead and makes that two in 64 minutes as he turns a McKinlay cross into the net to give Dundee five goals by five players today.

Coyne almost increases the Dundee lead with a six-yard header which Ferguson grabs at the post.

Accies send on Gibson for Martin and in 67 minutes narrow the goals difference when CAUGHEY fires a shot past Geddes.

Accies skipper Collins gets a painful knee injury and a booking when he fouls McKinlay.

Angus replaces Campbell who gets warm applause for his show of promise.

There is a sixth goal in 77 minutes. A slip by McEwan allows WRIGHT to race through to hit the shot under the diving Ferguson.

In 82 minutes WRIGHT completes his first hat-trick for Dundee when he steers a cross from the right past the keeper.

Summing up - Dundee finished in style with their highest score of the season and they missed as many as they scored. It was an entertaining ten-goal finale which pleased the fans. The seven goals brought Dundee's tally in cup and league games to 100 for the season.

Our matches against Falkirk, Clydebank, and Hearts have seen us take five points from a possible six at a stage in the season where the players are playing for little or more than points and their own pride. The results achieved have shown that they now have the right attitude, and we will look to put that to better use next season.

At Brockville, Falkirk proved tough opposition, as they were at that stage fighting for their Premier League survival. Although we were always the better side, and were more composed, we were given few chances by a stuffy defence, and in the end a draw was probably a fair result in this one.

Our next outing was at home to Clydebank, and here we lost an early goal, but didn't let this upset us. We kept pushing forward, and eventually the goals came, and it was again pleasing to see Coyne and Wright, both newcomers this season, picking up the goals. Overall, after that shaky start, this was a good solid performance with a result to match.

George McGeachie injured himself in training after the Clydebank match, and didn't make the team for the game at Tynecastle last Saturday, but this didn't stop us recording another win. After Keith Wright had put us ahead, Bobby Geddes saved a penalty just before the interval. Immediately after the break, a rare bad pass back by Sandy Jardine was caught by Coyne, who allowed Wright to score his second, and this put us firmly in the driving seat. Although Hearts pulled one back after a defensive slip, we made sure of the points with a Stuart Rafferty goal towards the end. Geddes' performance was excellent throughout, and the rest of the side also did well.

Today's match is our last of the season, and we entertain a Hamilton side which started the season with no luck whatsoever, and consequently were unable to recover. Already relegated, though, Accies showed in last week's win over St. Mirren that, with the pressure now off them, they can relax and enjoy themselves. They will be no pushovers today!

In closing, I'd like to thank our fans for their support throughout 1986 87. They, like the staff and myself, had to suffer the great disappointment of losing out in the Cup semi final, but have rallied round and encouraged the players right to the end of the season. After today, we must sit down and plan for 1987-88, and aim to give our supporters more consistency and better performances week in, week out. Then we will be in a better position to challenge for the silverware!

Have pleasant a summer!