George McGeachie and Jim Smith are back in the Dundee team against Aberdeen replacing Bobby Glennie and Rab Shannon. The Dons recast their side and in come David Robertson, Steve Gray, Brian Grant, Neil Simpson and John Hewitt.

Hewitt and Dave Robertson put pressure on Dundee's right and Brown does well to hook a Hewitt cross for a corner. There is real threat to the home goal as Irvine homes in on Hewitt's cross. The big defender's header is powerful, but too high.

Dundee also make their opening move down the left and Wright finds the massive frame of Irvine too great an obstacle.

Coyne is hurt in a clash with Simpson and needs attention. A Duffy free is headed deep into the Dens penalty area by Brown. Leighton gets to the ball before Wright.

A dangerous cross by Weir is headed away by McKinlay and the Dundee defenders have more work to do to clear the danger.

Coyne is prevented with a fine chance when a long clearance is missed by McLeish.The Dundee man steadies well and is thwarted when Leighton dashes from his wing to stop the shot with his legs.

Connor tries to catch out Geddes with a 25-yard shot through a crowded penalty box, but the keeper is well positioned

Dundee are battling their way into the game and a flow of crosses are supplied by their overlapping full-backs. A defence-splitting pass by Coyne puts Jack through and Irvine performs a last gasp rescue act eight yards out. The big defender stars again when he stops Wright in almost the same spot.

Dundee have a wonderful chance in 18 minute when a Duffy cross from the right catches Leighton off his line. Jack heads the ball for an open goal and sends it against the post to be scrambled clear.

Weir gets a hand knock in his own penalty area and needs a lot of work from the physio before he can carry on.

The referee goes to the Dundee dug-out to have a word with Jocky Scott after a penalty box incident between Wright and Leighton which produces a free kick for the Dons.

Just afterwards Brown is booked for something said to a linesman. Forsyth is booked for twice moving yards in front of the position indicated by the referee for a throw-in.

Brown tries to beat Leighton from 30 yards. The keeper has only to watch the ball going past.

The Dons dominate for a spell until Wright beats Irvine and Simpson is booked for fouling the Dundee man. A minute before the break Dundee go in front with a classic goal.

Rafferty breaks on the right and crosses perfectly for BROWN to race in to head into the net at the near post.

Reflections - An action packed derby with Dundee worth their lead. They have made all the best chances.

Brown is in attacking action right away and lays the ball back to McKinlay, who is upended by Ian Robertson. The full-back's free kick is headed wide by Brown.

Coyne streaks past McLeish on the right touchline and races into the penalty area. Target men are waiting but he miss hits his cross.

Aberdeen are level in 53 minutes. Weir sends over an inswin-ing corner from the left and as Geddes and SIMPSON go for the high ball, the Don gets a head touch to glance the ball into the net.

Duffy races across the field to whip the ball away from Weir who is racing clear on a long wind-assisted clearance. A minute later Geddes gets to a clearance from Leighton just before Grant.

David Robertson is booked for a foul on Coyne and from the free Forsyth cuts a way defenders and gives the ball to Rafferty whose cross is gathered on the ground by Leighton.

Coyne whips past David Robertson to hit an outswinging cross which Leighton does very well to grab before Wright can make contact.

The Dark Blues come close when Coyne heads down a cross and Wright's effort to hook the ball goalwards is swept away by Irvine,

The Aberdeen big men go up for another corner and when Weir's cross comes over it is their wee man Grant who turns the ball against the post. Geddes grabs the rebound.

In 77 minutes Weir crosses and Irvine forces the ball into the net but the referee indicates a free to Dundee. The incident ends sensation ally when Weir is sent off, apparently for dissent.

A couple of minutes later a tremendous 20-yard free kick by Hewitt hits the bar and goes over. A ball into the penalty area by Brown falls well for Coyne who mishits his shot from 12 yards.

Summing up - Dundee disappeared as an attacking outfit when their prospects looked rosy and in the later stages the Dons were the more likely side. Duffy and Hewitt win the men of the match awards. 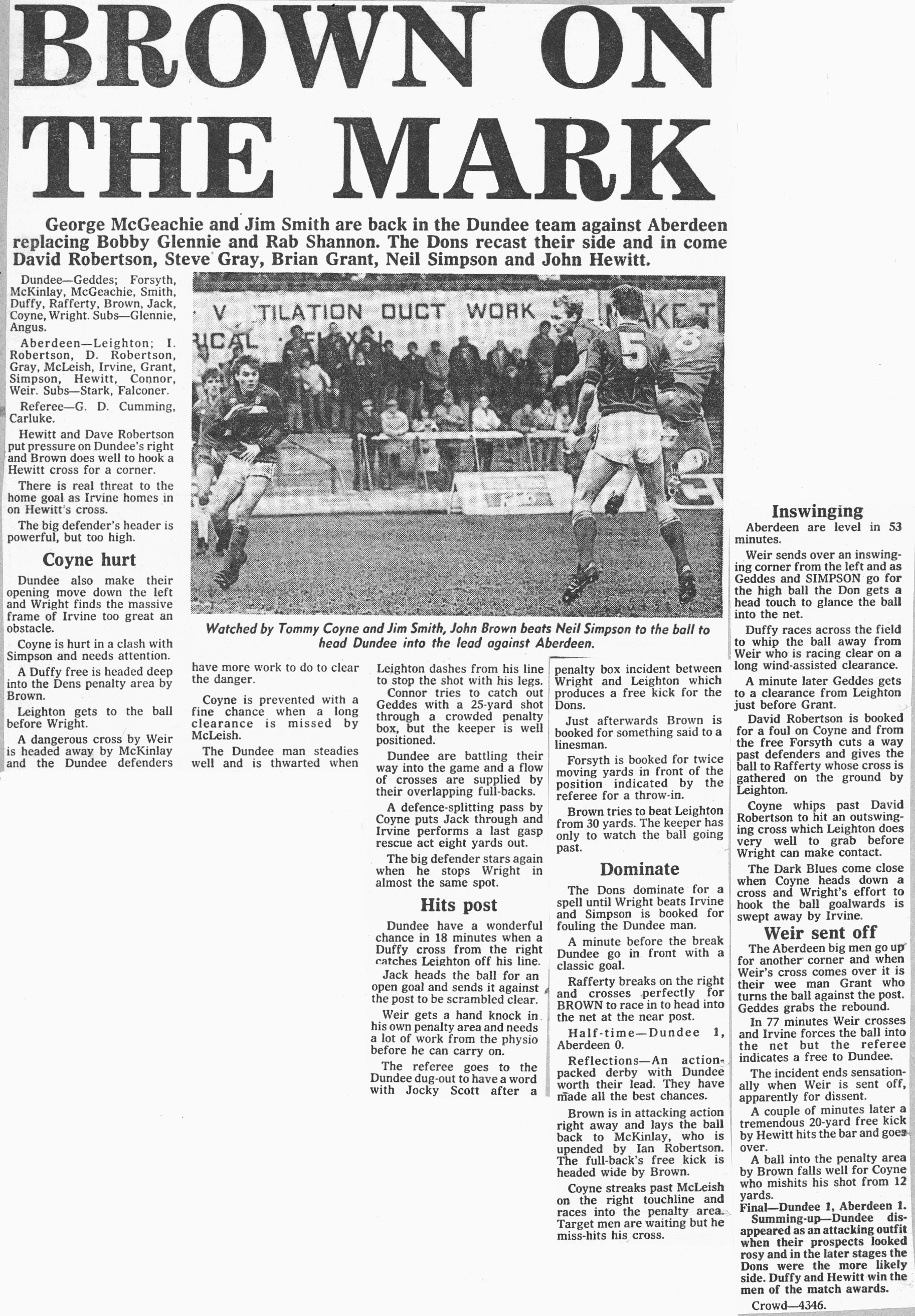