New boy Andy Geddes plays his first game for Dundee in the No. 11 jersey against Stirling Albion. Shirra is the man - to make way for him.

George McGeachie takes over from injured skipper Stewart MacLaren, with Les Barr at right-back. Peter Mackie is on from the start, in place of Jim Murphy.

Stirling's Lloyd Irvine has not recovered from flu and his place is taken by Allan Moffat.

Andy Geddes slots into a midfield position and is given a quick pass to get the feel of things.

The first move comes from Albion and Armstrong streaks down the right wing to send a high cross into an almost deserted penalty area, where McGeachie has bags of time to head clear. Armstrong pops up again on the left to send over another fine cross. This time Glennie, Dundee's skipper, clears.

Fraser starts a good move with a run and pass to Mackle, whose cross is knocked for a corner just before it reaches Stephen. A Mackie corner kick rebounds off a defender and he sends his second effort hard across goal, needing just a touch before it flashes past the far post.

Arthur, the former Dundee keeper, has to dive to his right to hold a dodgy back pass from Steedman as Mackie worries both defenders. Williamson clears his line by sending the ball for a corner and it goes too close to goal for comfort. The cross goes to Kennedy, whose low shot is blocked on the line by Glennie.

The home side control the wind and master the defence to score a fine opener in 21 minutes, Mackie sends a left-foot cross to the far post, where young STEPHEN controls the ball well and sends a low shot into the net just inside the post.

Mackie nearly gets one himself a couple of minutes later when he gathers a good pass from Andy Geddes to hit a 30-yard left-foot shot which bends and skims past the post.

Billy Steele gets a chance when he is unmarked as a Nicol cross drops at his feet. The striker volleys the ball wide.

Andy Geddes, who is covering a lot of territory. shows his shooting, power with a right-footer from 35 yards which crashes into Arthur's middle.

Billy Williamson is doing a close marking job on Beaton and Barr is following Armstrong everywhere. Steele sends a shot from the corner of the penalty area just wide of the post. A corner from the same player is headed a foot over by Kennedy.

Dundee break quickly and a Williamson shot from 20 yards is just wide. Stirling's Kennedy is booked for pushing the ball over the line with his hand to stop Fraser. Hall-time-Dundee 1, Stirling 0.

Reflections - Andy Geddes has been catching the eye of the fans with some neat moves. The game is no spectacular in awkward conditions - Dundee deserve their lead because they are more positive

Bobby Glennie breaks down the left on a Fraser pass, puts too much work on the ball and loses it to Moffat.

Dundee, with the wind at their back, are applying lots of pressure without managing to look dangerous until 53 minutes when they score a really good looking goal. Andy Geddes shares the handshakes for his neat forward flick which puts SINCLAIR through to hammer in a low shot from 15 yards. The ball glanced off Arthur's legs, but the 'keeper had no chance of stopping it.

The home lot are within a whisker of getting No. 3 when Mackie sends over a cross and Arthur just manages to block Fraser's attempt to sweep the ball home at the far post.

The third goal came in 59 minutes when Fraser sends over a corner from the right. McGeachie heads towards goal and STEPHEN knocks it home from close range.

Stephen gets another great cheer when he comes off to give Murphy a run. Stirling send on McPhee for Heaton. Bobby Geddes shows he is not frozen stiff when he dives to his left to push away a powerful shot from Gray.

Dundee are in complete control and Murphy's first corner kick brings another goal in 67 minutes It's a short one to the near post where Sinclair heads it down for MACKIE to hit the ball into the net from six yards. Three minutes later the wide awake MACKIE makes it five. A pass back from Nicol is a poor effort and the Dundee man runs between full-back and keeper to hit the ball into the empty goal.

Stirling get one back a couple of minutes later when MCPHEE is unmarked at the far post and has only to stick the ball into the net when it arrives from the left wing.

A Mackie shot nearly splits the crossbar and from the rebound, Fraser wallops the shot just wide. Steedman becomes the second Stirling player to be booked for deliberately handling the ball. Geddes tests Arthur with another of his long-range shots.

Summing-Up- Dundee ran riot with four goals in 17 minutes. Stephen showed his ability to snatch goals, Mackle showed the form expected of him in grabbing two in three minutes, Andy Geddes showed tons of promise and the fans showed their warm appreciation. 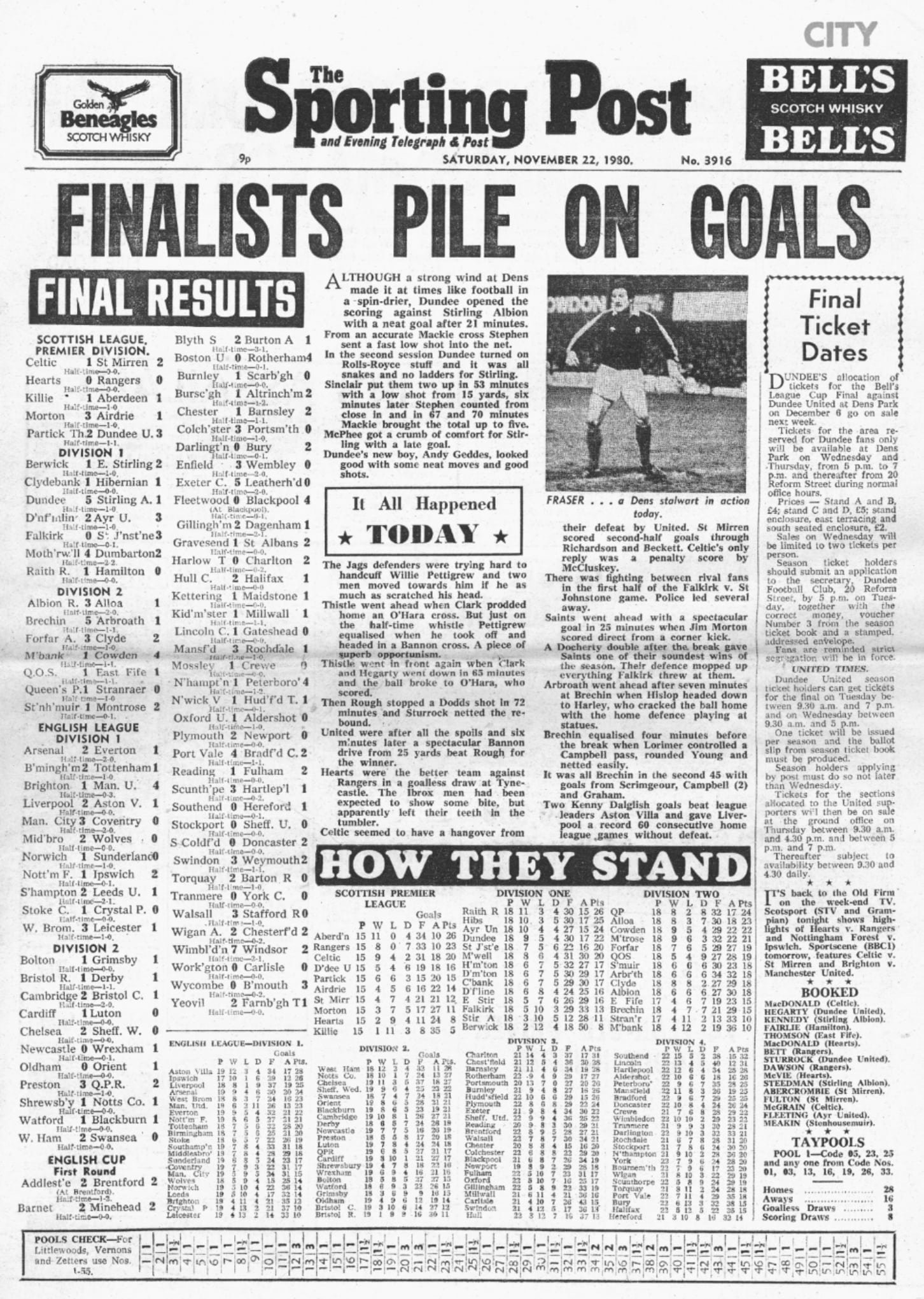