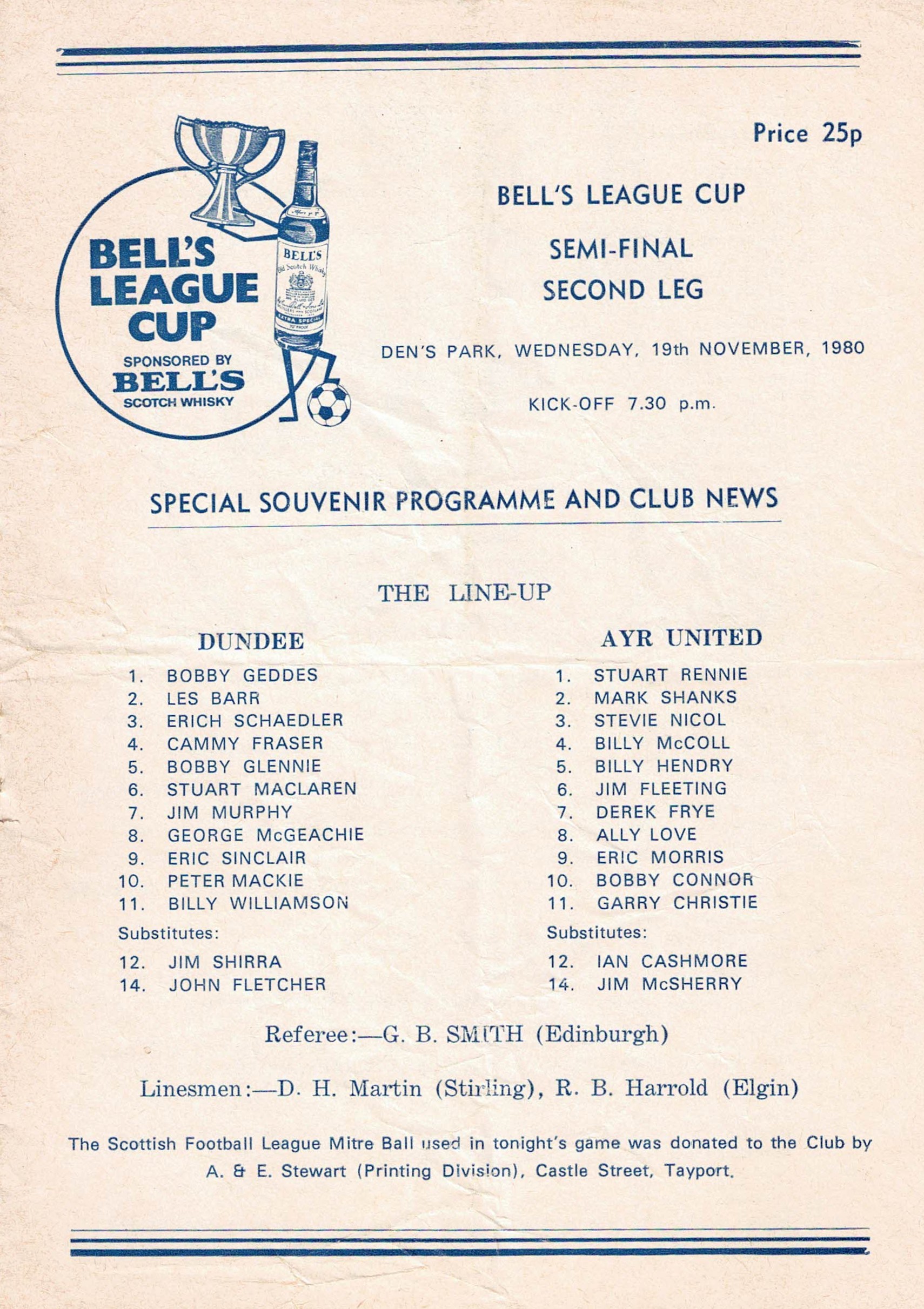 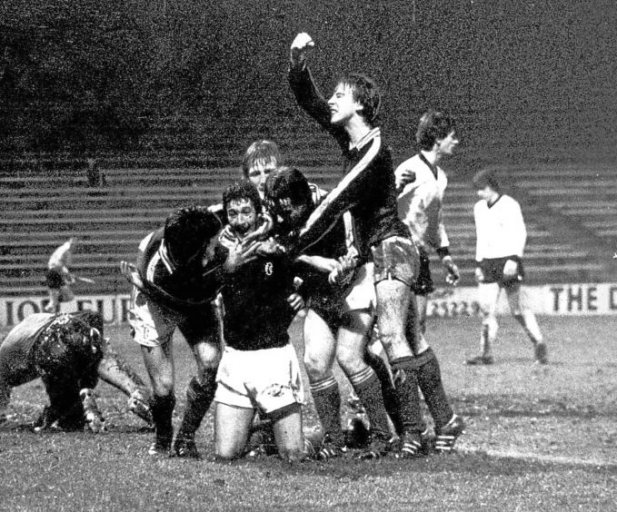 Dundee covered themselves in mud and glory at Dens Park last night as they fought back magnificently to reach the final of the League Cup.

This was a remarkable match of ups and downs, Dundee certainly looked down and out for a second half spell when they trailed by 2-1, but they simply refused to be beaten, and amid red hot excitement grabbed the winning goal just four minutes from time.

Not a classic match. it couldn't be in the difficult conditions, but all credit to both teams, especially for their second half efforts.

Credit especially to Dundee, who suffered a double injury blow just before the interval when they lost MacLaren and Schaedler when they collided.

After a quiet opening, the second half just exploded. Dundee took the lead through Billy Williamson, lost a bad equaliser, and then found them selves behind when Ayr had their best spell of the game.

But glory goals from Fraser and Sinclair again sent the home fans into raptures. There was a standing ovation for the home team at the final whistle and the players went to the top enclosure to pay tribute for the marvellous support they received all night.

So it's an all Dundee final on December 6 and a lot more excitement to come.

Dundee decided not to include new signing Andy Geddes. They made two changes from the team that started - McGeachie and Murphy for Barr and Mackie.

Ayr had travel trouble and arrived at the ground only 25 minutes before kick-off time.

Both teams took time to settle to the heavy conditions. The saturated pitch started to cut up at from the first whistle.

There wasn't a real threat at either end in the opening ten minutes. Dundee were certainly more aggressive but made the first slip-up when a Glennie pass back went astray. Frye fastened on and his cross was scrambled away for a corner kick.

Sinclair put in Dundee's opening shot in 16 minutes, the ball being deflected past the post. The corner kick brought a skirmish in the Ayr goalmouth, and another shot from Williamson was saved at the post by Rennie.

Still this tie hadn't warmed up, with a well organised Ayr team seemingly content to let Dundee do most of the running.

They paid the penalty in 22 minutes when the home side went ahead with a fine goal.

It started with Sinclair running through the defence, then flicking the perfect pass to the feet of Williamson. Billy's low shot was a winner all the way and the home fans went wild with joy.

Ayr had to get cracking now in attack, but a couple of weak shots from Frye gave Geddes no problems.

Dundee still looked more dangerous and young Stephen had a brave run before being crowded out.

The picture changed when a panicky home defence had a series of amazing let-offs in 34 minutes. First Morris headed off the face of the bar from a Connor cross. Before the ball was finally cleared, two close in shots were blocked and Ayr were justified in cursing their luck.

Two minutes later, with Dundee's defence again caught out, the visitors did get the equaliser. This time an attempted Schaedler clearance stuck in the mud and went only a few yards to Christie who had the simple task of shooting past Geddes.

This was complete transformation. Ayr were now full of running and confidence, with Dundee trying desperately to pull themselves together.

The rain had ceased but fog was rolling in as Fraser, off balance, got in a shot for the home side but was well off target.

The final drama in the first half came in 43 minutes when two Dundee players had to leave the field, injured after a clash of heads. MacLaren went off on a stretcher and Schaedler staggering. Barr and Mackie cane on as substitutes.

It was still everything to play for as Dundee set off "down hill" for the second half But Ayr had an early chance, McColl shooting a yard wide. Armour followed with another effort not far off the mark.

The visitors were putting much more bite into their play and Geddes required two attempts to hold a high cross from Nicol.

Frye, in fact "scored" soon after, but was clearly offside. Dundee, still upset by these injuries, had lost the initiative at this stage

Fraser almost put that right in -55 minutes with a fierce low shot from 20 yards which whistled past the foot of Rennie's post. McGeachie was booked for a tackle on Nicol but much worse was to hit Dundee just afterwards.

In 58 minutes the ball came out of defence to McColl. He quickly sent a low skidding shot into the corner of the net past Geddes - and Ayr were in front. Desperate now, Dundee piled into attack after attack. In a frenzied scene in front of Rennie, Shirra saw a shot deflected past when an equaliser looked certain

Despite strong home pressure and some desperate and fortunate clearances the minutes were ticking away for Dundee Some of their play was too desperate as well.

But again the game took a dramatic turn, and Fraser, after a wild shot just before, this time made no mistake.

He was coolness personified as he saw his first shot blocked, but gathered the rebound to shoot low past Rennie for the equaliser.

Amid burning excitement Dundee went all out for the winner with tremendous vocal support. A Sinclair header was deflected over the bar when a goal looked certain.

Ayr had sagged badly, and they brought on Love for Armour.

It was nearly an own goal winner seven minutes from time when Fleeting headed a Mackie cross off his own bar.

But the way Dundee were dominating now that goal had to come. Sinclair did the trick in 86 minutes with an accurate shot from a Stephen pass. The scenes of jubilation were almost over-powering

A shattered Ayr suffered a late booking, Frye being the culprit. 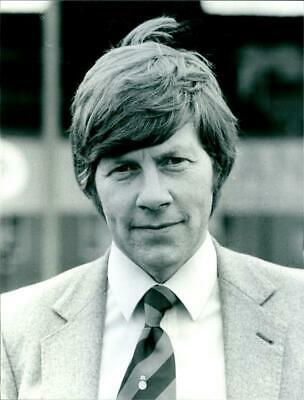 We welcome supporters to the first League Cup semi-final played at Dens Park. With the score at 1-1 from the first leg at Ayr I am sure you will see a very close, keenly fought match this evening.

It is certain Ayr will make it very difficult for us and although we were delighted with our draw at Somerset Park we do remember that United have upset Hearts, Hibs and Morton away from home. So there is no way we will be treating them lightly this evening.

I am hopeful that the flu bug has cleared up completely so that we can field a full team this evening. At half-time in the first leg at Ayr there was drama in our dressing room which looked like a casualty clearing station with George Mc Geachie, Peter Mackie, Jim Murphy, Stuart MacLaren and Bobby Glennie all feeling under the weather. George McGeachie was worst and could not go out in the second half.

Supporters have written asking why we did not use both substitutes earlier when so many players were ill. While George McGeachie was worst we were not sure which of the others was least likely to finish the game. It was a question of who was going to last the 90 minutes.

The Motherwell match was pleasing from the viewpoint that the young players coming into the side gave a good account of them selves and it was sweet revenge for our result at Fir Park earlier in the season. I feel this Motherwell side will be one of the top sid es in the First Division towards the end of the campaign and any points we get from them are very welcome.

Results have been better over the past few weeks but we are still convinced there is a tremendous amount of room for improvement in the side. One pleasing aspect of our successful run is that our sup porters are slowly returning to Dens Park. The support at Aber deen, at Ayr and against Mother well was tremendous and this helps us a great deal. The atmosphere lifts players and is greatly appreci ated by everyone at Dens Park.

As you will have read we are trying to strengthen the team by signing new players and I feel this is something I must continue to do-to try all the time to strengthen our squad. Our No. 1 aim must be to get back to the Premier League.

To-night's semi-final is a tremen dous bonus for us but we must all have ambition to return to the top league. We are trying very hard to take each game as it comes and I again ask our supporters to be pat ient until we can get things right.

Our 3-0 victory at Falkirk on Saturday was a very satisfactory result for us, our best away from home so far.