Dundee, hoping to extend their undefeated league and cup matches to 14, recall Peter Mackie for lan Ferguson, who is with the Scottish Youth squad in Monaco. Former Dundee player Wilson Hoggan finds a place in the Falkirk midfield.

Mackie tests the Falkirk defence with a high cross into the box but Watson saves in spite of an enthusiastic challenge by Ray Stephen. Schaedler leaves the field for treatment after a collision with a Falkirk forward. He appears to have suffered a facial knock, but soon returns.

Falkirk come close when Conn crosses to Spence, but Geddes is quick to see the danger.

Fraser and Mackie show eagerness on the right as Dundee strives for an early opener The ex-Hearts player crosses intelligently for Shirra, who heads too high.

In 18 minutes Mackie fires a low, hard shot into the Falkirk goalmouth and Williamson unmarked, shoots for goal. The ball seems to strike a defender's arm but penalty claims rejected by referee Murdoch.

Thomson's curling header from a Geddes punch-out flints just over the bar. Mackin almost gives Falkirk the lead when he heads fractionally wide from a Conn corner.

Sinclair turns Buchanan inside out, but Fraser scoops his pass high over the bar.

A let-off for Dundee on the half-hour mark when Conn crosses into the goalmouth. None of the three foraging home forwards can turn, the ball in.

In 38 minutes Falkirk captain Mackin is shown the yellow card for a tackle on Sinclair. Geddes gets down well to hold a Mitchell free kick and Williamson sends a Sinclair pass yards high.

Mackie fails to connect with Fraser cross when keeper Watson strays from his line. Dundee press hard for a goal before the break and a Fraser volley is stopped well on the line by Watson.

Rose is booked for a foul on Sinclair.

Half-time - Falkirk 0, Dundee 0. Reflections - A hard fought open match with plenty of scoring chances. In the second half Dund will be looking to Fraser to break down a stubborn defence.

Falkirk replace Stevenson with McRoberts. In 48 minutes Hoggan worries Geddes with a drive from 20 yards which finishes just wide.

A sensation in 51 minutes when Falkirk's captain Mackin is given his marching orders for a foul on Shirra. Dundee press forward and Sinclair and Stephen combine well. The final pass is wasted by Williamson, who shoots high. MeGeachie replaces Barr for Dundee.

Fraser sends Mackie clear on the right, but Watson gets down well to save.

The home fans are in an uproar when Thompson tumbles in the Dundee box when pressurised by McGeachie and McLaren. The referee rejects penalty claims.

Buchanan makes a great 30-yard run in 65 minutes, but his well-placed cross is mistimed by Conn before an open goal.

Two minutes later Dundee take the lead through MCGEACHIE. After a corner on the right, the ball is walked out to the fair-headed defender. He fires through a ruck of players past the luckless Watson from 10 yards. Falkirk send on Perry for Thomson.

SINCLAIR heads into the net from a Fraser cross in 76 minutes. Dundee get a third goal in 82 minutes. Stephen's shot is parried by Watson but SINCLAIR is on hand to tap the ball over the line.

Summing-Up A business-like performance by Dundee, who in the end simply wore down the home side. Falkirk were found lacking in front of goal. The Dark Blues, in spired by two-goal Sinclair, had no passengers. 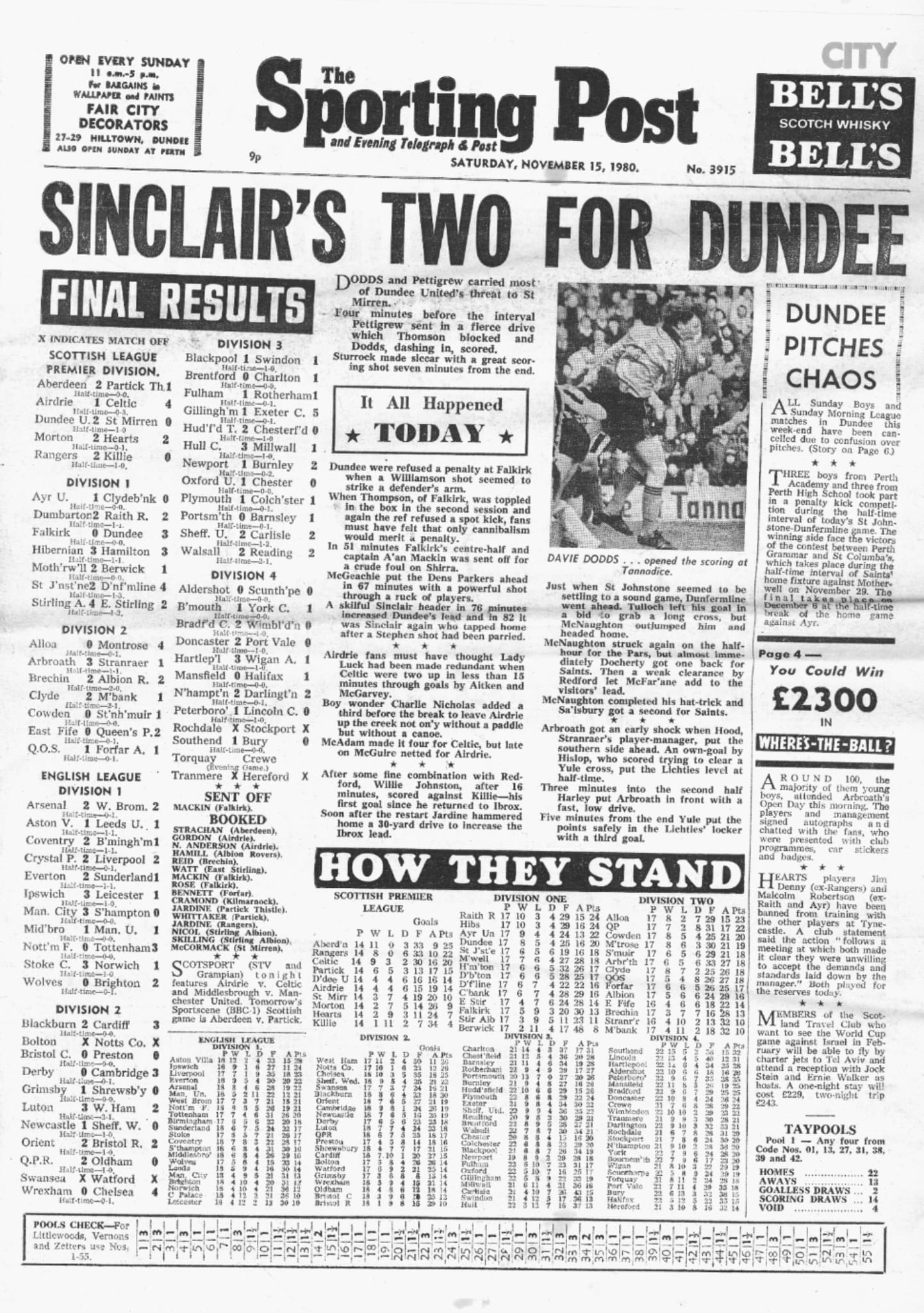