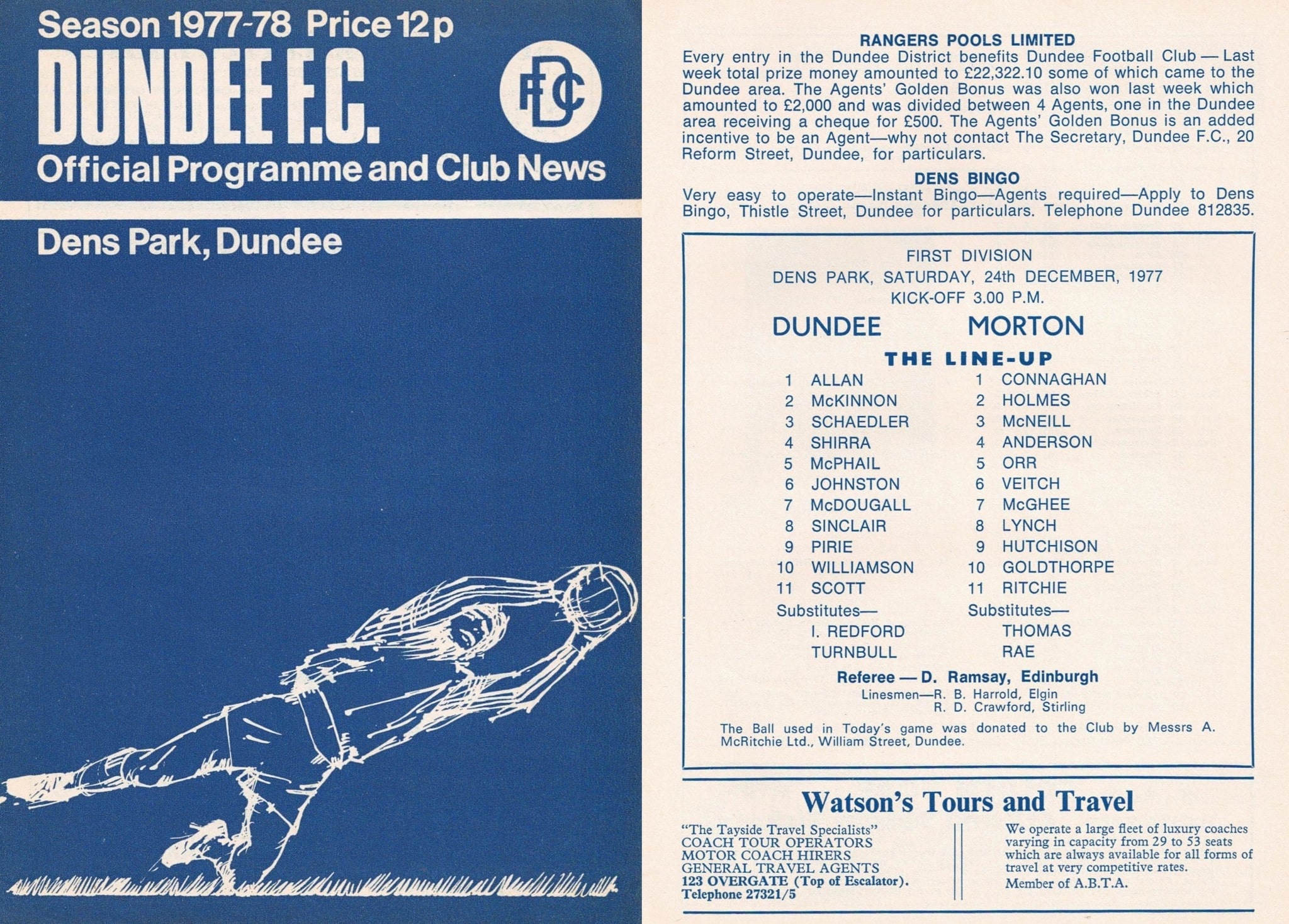 Dundee are unchanged for the vital top of the league game against Morton at DensbPark.

Morton make four changes, bringing in Mclean at right back and switching Holmes to the left. Upfront Charlie Brown and Evans replace Lynch and Hutchison.

There is a Continental touch when the Dundee side take the field, trot to the centre circle and salute the crowd. The well-filled enclosure loves this.

Then Santa Claus appears from the crowd with a Christmas cracker for home manager Tommy Gemmell.

The fans are solidly behind the Dark Blues from the kick-off and get their first chance to roar appreciation when McKinnon sends the ball forward to Williamson, who slides it across goal, where Pirie just fails to tuck it away at the far post.

There's a shock in store in the fourth minute, when bad marking costs Dundee a goal. The high McGhee corner kick from the right goes to ANDERSON, whose header hits the underside of the bar, bounces on the line and rolls into the net.

Dundee almost level things from the kick-off, Pirie then McDougall being denied the chance to stick a ball from the left into the net.

There is plenty to shout about. Scott picks up a McDougall pass and crosses perfectly for Williamson, whose header is wide. A 25 yard shot by Pirie scorches past the other post.

When Pirie takes the ball from 'keeper Connaghan he is downed at the edge of the box. Dundee claim a penalty, but the ref says the foul was just outside. Dundee are playing well without getting the break of the ball and a sometimes not too confident-looking Morton defence is carrying luck. As Shirra sweeps the ball looks well beaten and Holmes heaves himself horizontally to head the ball clear.

There is a spot of trouble in the covered enclosure after a free kick award against Dundee which is un popular with the big home support.

A MacPhail shot goes low past the post before Morton get clear to cause a spot of bother for the home defenders.

But there is little respite for the Morton defence. A couple of Scott crosses are headed out and a Schaedler shot streaks into the arms of the 'keeper.

Dundee have almost complete control of the midfield and their approach play is good. A goal must come and it is a beauty when it hits the back of the net in 26 minutes.

Scott weaves a way through on the right and sends a low ball to PIRIE on the blind side of the defence. From 15 yards it is neatly and swiftly hit low to the far corner. Defending applause greets the striker's 21st score.

After a couple more close the far corner. Deafening Holmes takes the ball to the line and crosses. 'Keeper Allan drops the ball and in the he-man scramble Johnston and MacPhail are both hurt and need attention. MacPhail resumes limping. Turnbull goes to the centre flag to go on as sub, but big MacPhail decides to carry on.

A Pirie header from a Shirra cross goes over the top as Ritchie lies hurt in the Dundee half. He, too, limps after attention.

Johnston and McGhee both miss as they stretch for a ball from the right and it skids past the far post.

Reflections - This is the cracker it expected to be and then some. Dundee are giving their best of the season and Morton are defending stubbornly and breaking dangerously. It means a feast of football skills and thrills for the fans.

Dundee launch themselves at the Morton goal. Shirra dives for a low header in the goal area and misses. A low shot by McDougall goes past the far post.

Sinclair wins the ball well on the left and crosses to Pirie, whose left-foot swipe sends the ball spinning in the air. Allan saves well from McGhee in Morton's next break-out.

Then a soft pass-back is chased by Sinclair and as he clashes with the 'keeper the ball breaks to Pirie. The centre's quick lob bounces on top of the bar and goes over. Sinclair chases in again to meet a Schaedler cross and sweeps it over the bar.

McGhee can't be given an inch of space. He turns quickly on a Ritchie pass to hit a low shot just past the far post.

Dundee are having little luck around the goal. Shirra runs well then sends to Williamson whose 25-yard shot is high by inches.

The fans are in ecstasy in 59 minutes when Dundee go in front with a goal that is the result of sheer hard work by Pirie.

The centre makes space for himself on the edge of the box, but Holmes picks up the ball. The full-back slides it back to his 'keeper, but the racing PIRIE changes direction quickly and gets to the ball just before Connaghan to steer it past the 'keeper into the net.

The pressure is telling now and Dundee stretch their lead with an own goal scored by Morton right back MCLEAN.

McDougall wins the ball well on the right and crosses a high one. The right back desperately tries to head over his own goal and instead steers the ball into his own net. He sinks to his knees on the six-yard line and is consoled by his 'keeper.

Allan makes a fine save to keep a McGhee header out and Goldthorpe steers the ball wide after a Johnston pass-back goes adrift.

Pirie is desperately keen to get his hat-trick and three times he comes mighty close. With 13 minutes left, Thomas replaces Goldthorpe

Summing-Up | When Dundee's second goal went in, Morton began to look frayed at the edges. But they did not give up. Dundee's power gave the game the glory. Pirie's scoring skill brought reward for fine play, particularly by McKinnon, Williamson, McDougall and Sinclair. On this show ng, Dundee are worthy of top spot in the league. They were cheered off by their fans and manager. 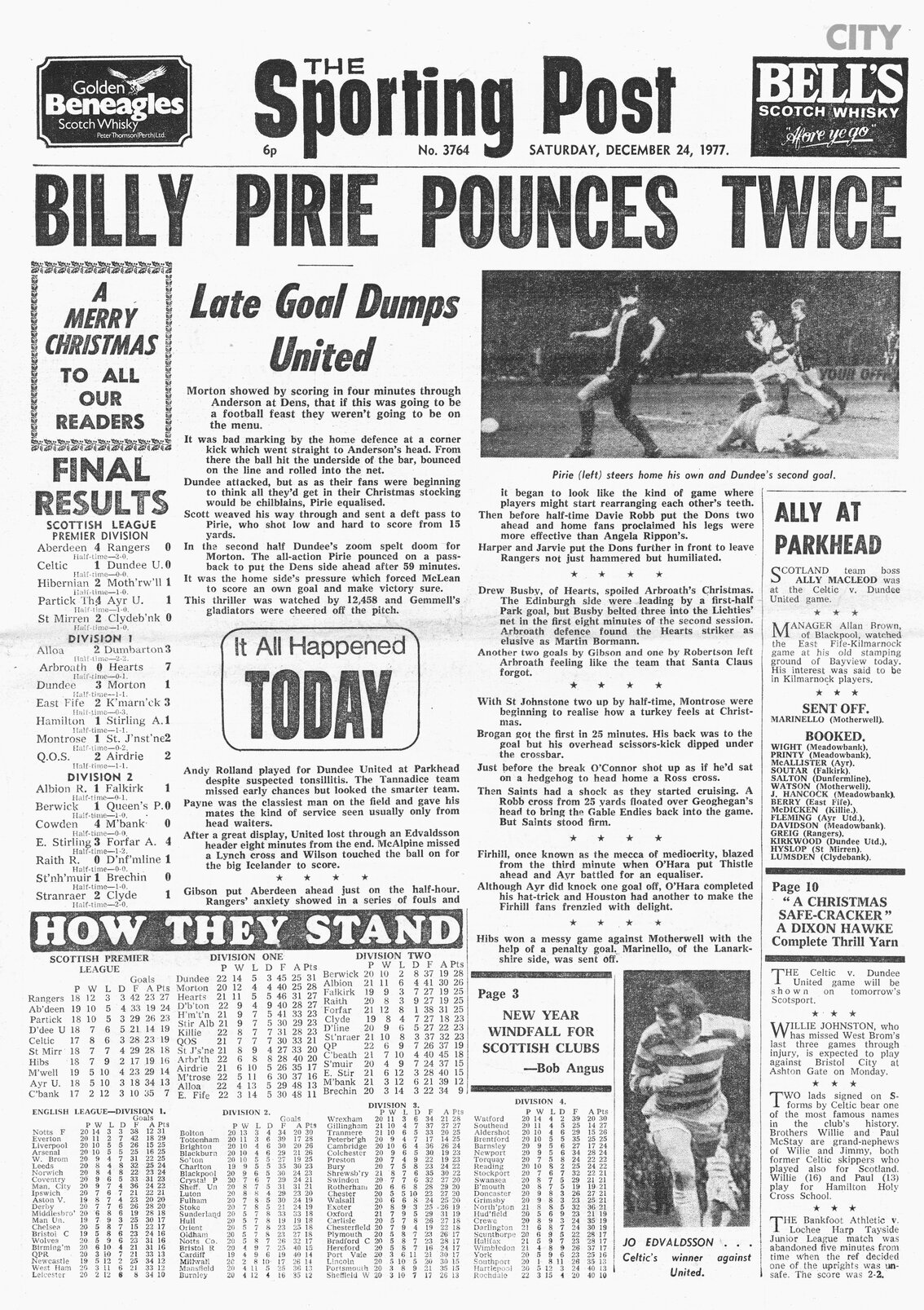 We have had a great build-up for today's top of the table match with Morton. Our fine win against East Fife at Methil and Morton's slip-up against Arbroath at Cappielow means we go into this vital game as league leaders.

The setting is perfect. It is Christ mas Eve. All the shopping is done the other preparations completed, We are ready to enjoy ourselves. If we win we will open up a gap at the top of the table.

We are in a good position, but we have to do it all ourselves to-day. It is Morton who are chasing us now and who would have thought a month ago that would have been the position?

There is still half the season to go and everyone will have their slip ups. We must continue to apply our selves for the whole 90 minutes as we did at Methil. The players are learning to be patient and not be. come frustrated if goals don't come early. We are in a much stronger position now than we were at this time last year and are looking for ward to the holiday games.

But we know there is hard work ahead. If we link our ability to hard work we will go places. We have been through a bad spell as we tried to get into our stride after new players came into the side. Some times we did just enough to win. Possibly the breaks are going against Morton in their bad spell. We got one or two breaks when we needed them and these things tend to level out. Today's game will be a hard struggle. If we get a good crowd behind us that will give the players tremendous encouragement.

Everyone at the club wishes our supporters well at this time of year. We hope to see you often in the new year.

• As a prelude to today's big game we have invited the Strathtay Under-16 side to play a team made up of our Under-16 and Under-15 "S" signings. This will give the fans a look at some of our boys for the future