Erie Sinclair comes into the Dundee side in place of Bobby Hutchinson, who has a stomach complaint.

St Johnstone's last-minute selection for the Tayside "derby" includes Dave Clunie and Derek O'Connor, who had both been on the injured list.

Dave Johnston powers his way down the left to give a good pass to winger Simpson whose cross goes into the side net. Johnston is back with an other strong run for goal and hits a powerful left-foot shot from 20 yards which hits Houston.

Dundee are a goal up in four minutes. Simpson sends over an in-swinging corner from the right and Williamson's shot is blocked. The ball comes back across goal and Sinclair heads down to PIRIE, 12 yards out. Billy puts the ball into the net just inside keeper Robertson's left-hand post.

There's a chance to grab another when Simpson crosses from the left. McDougall heads down for Williamson, who takes too long over the teeing-up process and is dispossessed.

A second score for the Dark Blues comes in the 10th minute and it is a shocker for Saints to lose. Pirie turns the ball neatly past Rutherford and shapes to cross the ball to Sinclair, who is calling for it at the far post. Twice Pirie changes his mind. No one covers SINCLAIR, and with no other option, Pirie crosses at last for the lonely-looking striker to head accurately past the helpless Robertson as the arguments begin among the Perth defenders.

The struggling Saints flash into action with a craftily placed corner kick by Ross which is headed by Rutherford. Allan is alert and holds the ball under the bar.

There's another good chance for Dundee as the ball floats over from the right. Pirie heads it back to Sinclair whose header from three yards goes over the bar. A low cross by Johnston is cleared by Thomson, in the left-back position, as Doug Houston organises his defence against the sharp Dundee thrusts.

Anderson pushes a long ball through for Brogan, who cannot control the ball before it crosses the byline. Thomson Allan runs from the penalty area nearly to the touchline to knock the ball away from Saints' right back MacKay.

Dundee are three up in 28 minutes. A Williamson shot is diverted, Dundee claiming by a defender's hand, and as everyone waits for the referee's decision SINCLAIR runs on to the ball. He is up-ended as he shoots from six yards, but the ball slips into the net just inside the near post.

There are near things aplenty. A McDougall cross is held with some difficulty by Robertson as Sinclair moves in with his hat-trick very much in mind. At the other end, a Taylor shot hits Allan's right-hand post and runs along the line to be cleared near the other post by McGeachie, who gets the ball just before O'Connor. Johnston does good work for Dundee on the right and slings the ball over to Simpson, who takes far too long to decide what to do, then sends a cross straight to a defender.

Simpson gets another chance from a Shirra cross. This time he first-times the ball over the bar from 10 yards.

Half-time - Dundee 3, St Johnstone 0. Reflections - Dundee are in the mood today and the Sinclair-Pirie double act is tearing gaps in a far-from tight Perth defence.

Saints resume with Wright in place of Taylor and right away the newcomer works a neat set-piece with Anderson from a free kick just out side the box. 'Keeper Allan reads the play well and holds Anderson's cross under the bar.

Saints reduce the deficit in 48 minutes when the home defenders are caught on the turn. Brogan crosses from the left and Wright returns it quickly for THOMSON to head into the net from close in. Sinclair heads a Johnston cross just wide and Saints race downfield for Thomson to shoot narrowly past.

Dundee are looking disjointed now and they suffer a bad blow in 53 minutes. A Ross shot hits MacPhail and, with Saints claiming a penalty, the ball is scrambled clear

But 'keeper Allan is flat out near goal. He is carried off with a head injury. Manager Gemmell presides over a Dundee meeting to elect a substitute goalkeeper and Simpson is chosen. Then the manager races to the dressing-room to see Allan before returning to send Redford on as the substitute.

The drama is not over. O'Connor is booked for a foul on MacPhail as Saints try to put the pressure on the young, inexperienced 'keeper.

Play is hectic and some times rough. Shirra is marshalling his forces to ensure cover in front of goal and opposing skipper Houston wastes a chance by floating a free kick into Simpson's rather nervous arms.

Saints get another goal in 67 minutes. The scorer is wee winger ROSS, who gets clear when Johnston falls. He races into the box to hit a low shot which goes between a defender's legs and into the net by the far post. Next minute Simpson comes bravely from goal to whisk the ball away from Ross when the winger threatens again.

Saints' third goal goes into the net in 74 minutes. WRIGHT takes a free kick just outside the box to the left and he uses the wind well to swerve the ball into the far top corner of the net.

Dundee fight back and a Williamson header from a Shirra free kick flies past the foot of the post. To strengthen their defence, Dundee send on the experienced Ford for young McGeachie.

Pirie and Rutherford crack their heads together and both need treatment. Then Simpson dives to send an Anderson shot past the post. With his side fighting for survival, injured 'keeper Allan appears fully dressed to watch the final drama from the dug-out.

There's an almighty scramble in Saints' goalmouth following a Redford corner and after it all the Perth side are awarded a free-kick. 'Keeper Robertson needs attention from the trainer. Another Wright free-kick is headed wide and Dundee break for McDougall to hit a low shot just wide.

Drama to the end! With only injury-time left Sinclair is up-ended in the box and the ref points to the penalty spot. Saints protest and insist the ref gets a second opinion from the linesman. This also goes against them and PIRIE bangs the spot kick into the net.

Even that's not it all. With Saints making a final spurt, Dundee break and Redford slips the ball to PIRIE, who has only to slide it into the net to complete his hat-trick.

Again Saints protest and go en masse to the centre to appeal to the linesmen. Dundee manager Tom Gemmell goes to the touch line to help cool things.

Summing Up - What a game! Dundee seemed to be coasting to victory until Allan was hurt, then survival. Then came the they were struggling for grand finale for fighting Dundee which delighted and thrilled their fans. 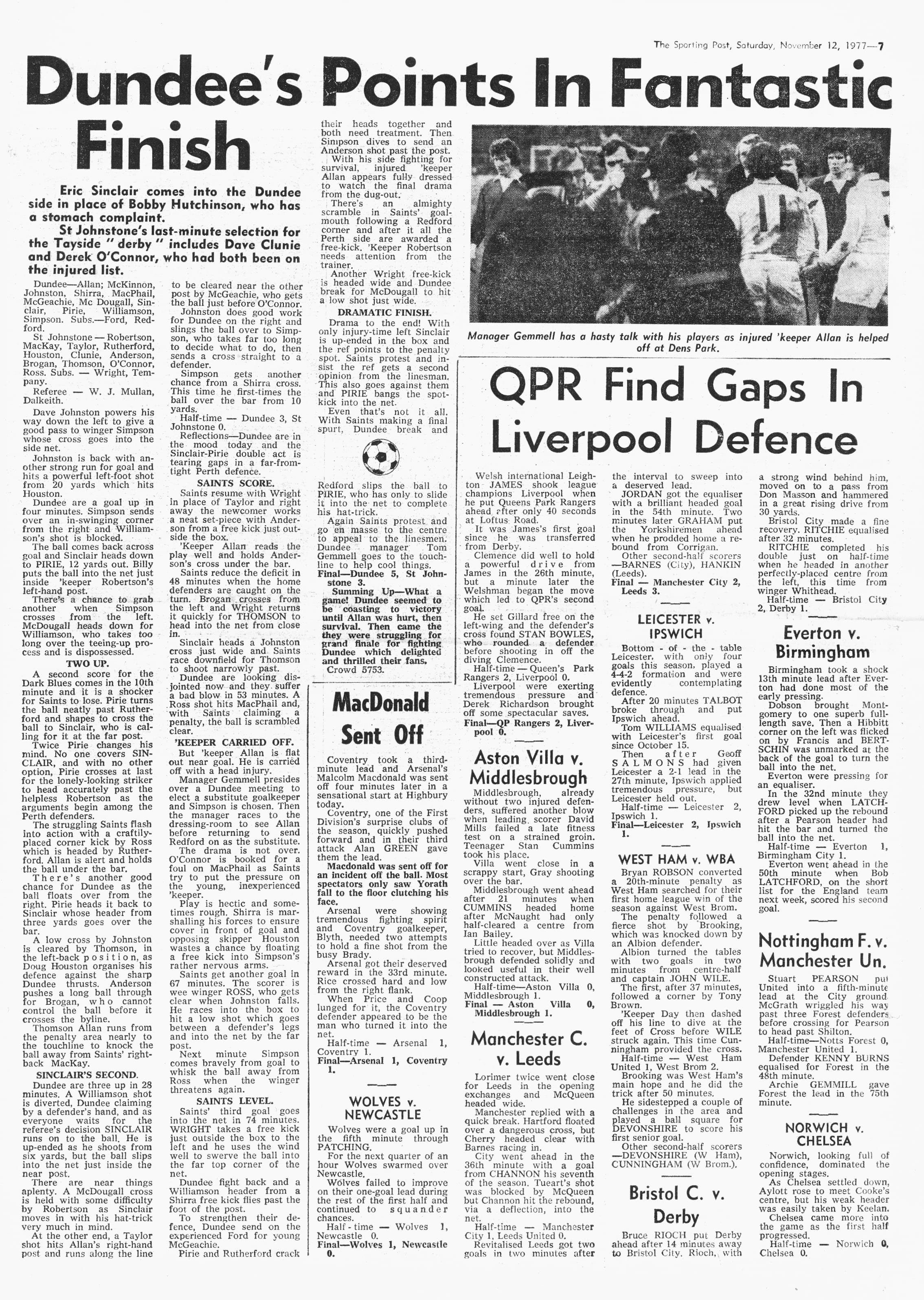