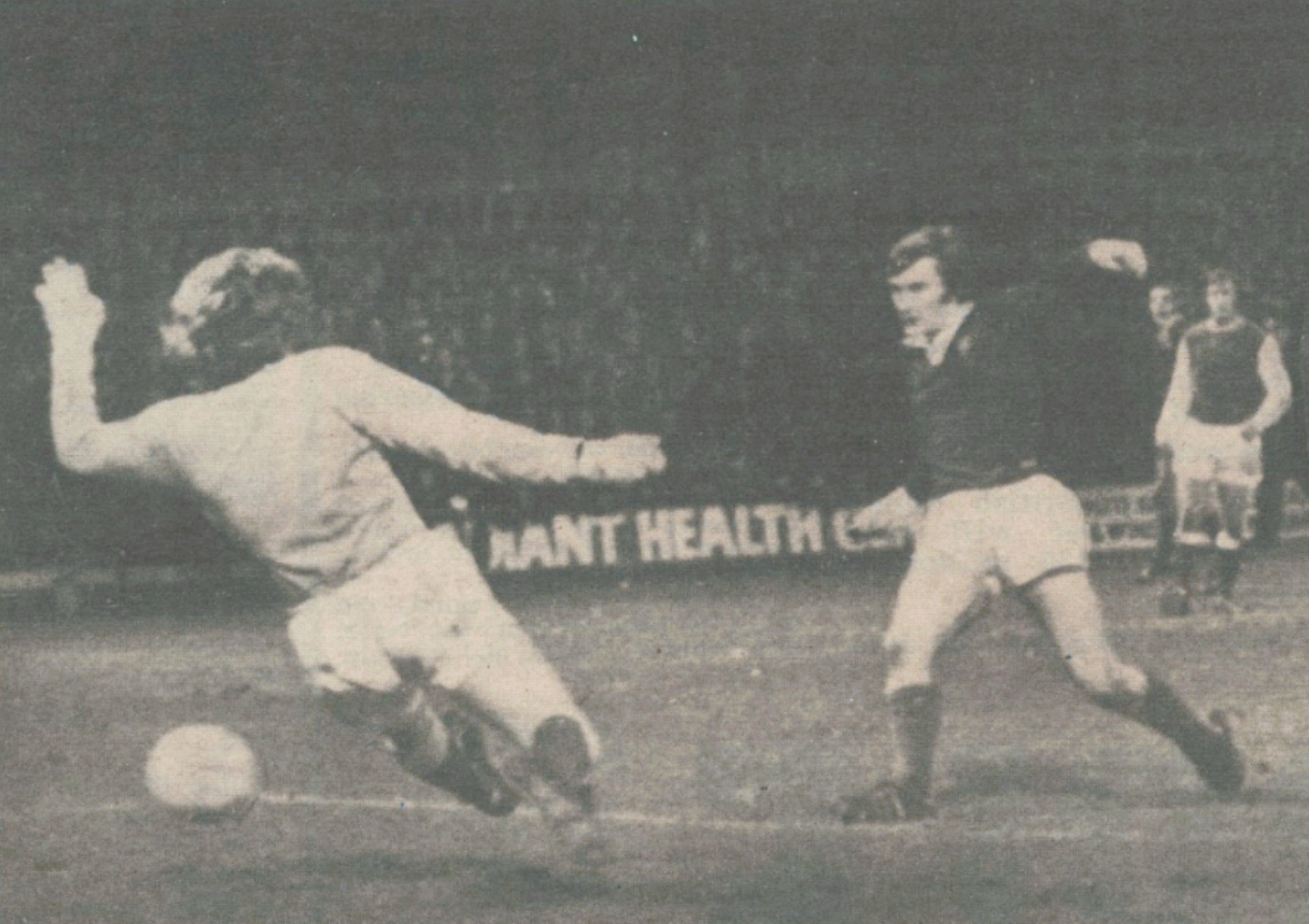 Three goals in 15 sensational first half minutes at Dens Park last night, put Dundee on the road to a golden Scottish Cup semi-final clash with Celtic.

Jocky Scott, John Duncan and Bobby Wilson were the men who brought the 30,888 fans - Dundee's biggest crowd of the season - to their feet and shattered Hibs in this quarter-final replay.

Hibs had £120,000 Harper on the bench, with young Bobby Smith at right-back and Alex Cropley on from the start.

Dundee were unchanged, Iain Phillip having passed a late test. He played with his thigh heavily strapped, a sensible precaution on a pitch that was dead down the middle.

The atmosphere was electric as Dundee kicked off after a 10 minutes delay.

Duncan gave the first hint of the sensations to come in six minutes, racing on to a long clearance from Allan. From just inside the box his right foot shot dipped inches over the bar.

Dundee were causing Hibs all sorts of problems. A Robinson shot was held by McArthur - seconds later the 'keeper saved from Bobby Wilson.

Hibs, settling slowly, did come forward but there was an obvious opening for Dundee in 13 minutes when O'Rourke fouled Gemmell, but Scott and Duncan ran offside when their skipper chipped over the free kick.

Hibs almost sprang a surprise in 19 minutes. After Spalding had found Arthur Duncan with a superb 30-yard pass the winger's hard cross was only inches away from Alan Gordon, Hibs' hat trick hero of the first game.

Then came a quick fire double escape for Dundee.

Gordon, slipping free of shadow George Stewart for almost the first time, chipped forward a perfect ball. O'Rourke flicked on with his head but Allan saved on the line. Then a similar pass from Stanton gave O'Rourke another chance but this time he shot wide.

But in 25 minutes Dundee scored the vital first goal, Jocky Scott's 22nd of the season.

A long ball from Robinson found Scott on the left. He moved past Smith and, from the edge of the box, hit a knee-high right foot shot. The ball seemed to swerve in the air and, though Jim McArthur got both hands to it, he let it slip away and bounce over the line.

His through pass found John Duncan just onside. The Dens' centre swept in on goal and then fired a right foot shot just inside the post.

Five minutes before half-time it was 3-0, right back Bobby Wilson getting in on the act. Wilson seemed to have all the time in the world as he turned on a Ford pass and swept the ball well away from McArthur.

Alex Cropley was booked with 13 minutes left when he squared up to Jimmy Wilson after the Dens winger had brought him down.

In the final seconds Duncan Lambie was replaced by Ian Scott - for surely the shortest and happiest substitution of the season.

Now Dundee meet Celtic in the semi-final, and after this display they certainly look a good bet for the Cup.