Bob Shankly returns to Dens today in different colours. He announces no changes in the Hibs side.

Dundee are as previously selected. Home interest is centred round the appearance of teenage centre John Scott.

The weather is perfect.

Dundee are in touch with the Tannadice goal within 15 seconds. A "hands” free kick by Stuart from the centre circle finds Penman appearing with a lunging header over the bar.

Hibs, aware just how vital it is for them today, immediately move up. They miss a scoring chance as Vincent draws up to allow Donaldson a smothering dive at his feet.

In the following minutes Hibs really start to show with combined play from defence to dangerous attack.

Donaldson has to hurtle himself at the post to effect a brilliant save from Cormack after a great move by Hamilton. Wily Willie goes on himself to drive a hard one narrowly past.

But the Easter Road defence does not look particularly happy when Dundee attack.

The youngster cottons on to a Stuart pass, evades two defenders and hits a rasper from 15 yards. Wilson is able to get a fingertip to the ball but this only deflects the shot off its original line nearer to the corner of the net.

After Alec Hamilton dribbles danger out of the home goalmouth Cooke delights the 15,000 - odd crowd with a dazzling episode on the right wing. Four defenders fail to halt his skilful ball play and in the end Baxter fouls him short of the penalty box.

After 18 minutes Quinn falls foul of the referee. The winger has words with Mr Watson about a decision, appears to be walking clear with a warning, then is called back to have his name taken.

Hibs come close to equality soon after this. Donaldson's quick reflexes beats them. A shot by Martin is deflected by Cox, but when appearing well beaten by the sudden change of direction Donaldson whips the other way and steers the ball with his hand to let Hamilton clear it near the line.

But Dundee still hold the initiative and always seem to carry more threat near goal with Cooke dribbling past the defence almost at will.

Sometimes, however, he passes a little too late for his colleagues to strike effectively.

But Dundee snatch No. 2 in 31 minutes. SCOTT again! He makes an extra effort in a short burst to a slick Penman through ball. He is losing his balance when he shoots the ball into the corner past a helpless Wilson, who must be blessing the men in front.

Two minutes later and another Hibs player is booked. McNamee's name is noted after he sends Scott sprawling unceremoniously.

Hibs are having a costly afternoon one way and another.

And still it's mostly Dundee. In the 40th minute Scott is robbed of his hat trick when Wilson touches a thundering shot for a corner.

On the whistle Hibs are jammy. Wilson tries a short kick out to Baxter, who fumbles, and Murray lobs for the empty goal. The ball rebounds off the bar! Half - time - Dundee 2, Hibs 0.

Reflections - Great stuff - unless you're a Hibs fan! Hibs were really up against it with Scott's shooting ability and Cooke's brilliant dribbles. Behind the home attack everyone was in command of the situation.

Dundee repulse early pressure, and their relaxed football keeps them that bit ahead.

Scott hurts his back in a scramble near the line.

Hibs don't seem to be able to rid themselves of the tension which must accompany such an important game. The forwards switch positions - Cormack on the right wing and Martin on the left, with the others moving as they please.

It does nothing to improve the situation for them, with the Dundee defence as solid as ever. Cousin is always prominent with his head as Hibs desperately try to beat them down.

In 61 minutes Hibs count their blessings twice. Scott controls a long sweeping cross by Hamilton only to drive against Wilson and Penman hammers one first time against the crossbar, with the Hibs defence hopelessly out of position. There's lots more hectic stuff around the goal.

Scott, deserving that hat trick, wins the ball through sheer strength and Wilson stops a score with his foot.

Donaldson is untroubled. Right now Hibs are having to concentrate on saving, instead of scoring goals. When they do break out, their clever enough outfield play flounders short of the target area.

Dundee in contrast are biting much deeper and can at least get a crack at goal.

It's 76 minutes before Hibs even look like scoring. Donaldson is out of position but Quinn's drive is blocked by Easton

Scott misses a good chance at the other end before Hibs gets break and score in 81 minutes. VINCENT shoots in a scramble, and although Easton succeeds in beating the ball out, a linesman indicates that the ball did cross the line.

Next minute booking No. 3. Cooke appears to make a comment about Quinn's tackle on him and the ref immediately jots his name down.

Dundee should certainly not be in the position of having to stage a last-ditch stand to win this match.

In the final minute a drive from Hibs Hamilton flashes inches wide of the post.

Summing-Up - And so Dundee do it again. They know how to handle the big shots.

On pressure it could have been a real tanking for the men from Edinburgh - the kind of result Dundee gave Hearts at Tynecastle.

But Dundee missed chances and hit the wood work several times. Young Scott took his goals well but he might have had four or five. 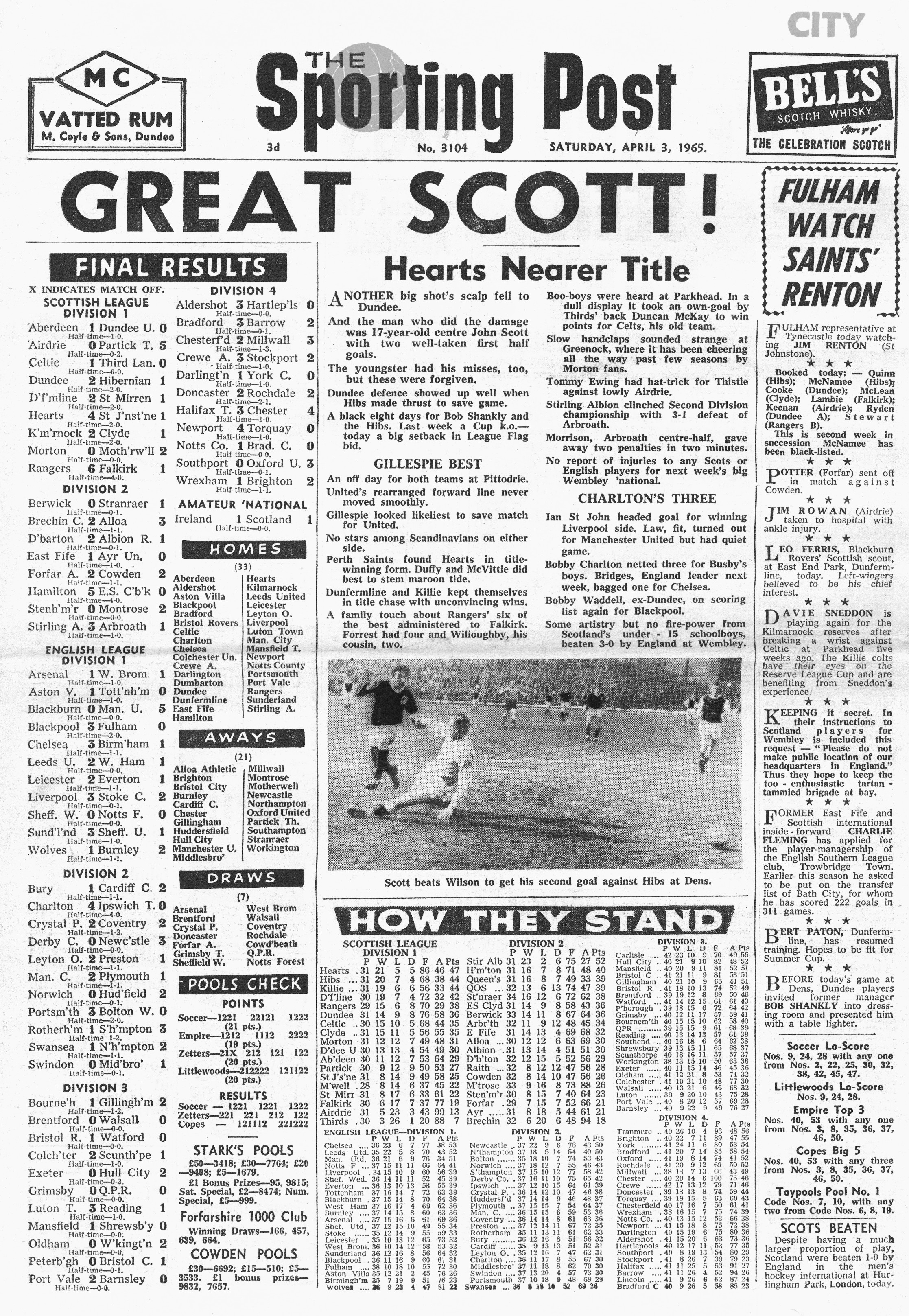