It's cricket weather at Dens Park, but the crowd is on the small side.

With Bobby Cox still suspended, and Bobby Seith nursing his ankle injury, the home side is under strength. Reid is in the rear rank, Cousin continues at right-half and Murray is at inside-right.

Partick also ring the changes, most of them positional. Regular right-back Hogan and right-winger Cowan are injured.

Dundee kick off towards the Provost Road goal. A quick thrust into the "Jags" goal is repulsed.

Andy Penman drops a lovely ball over Cameron's head, but as the centre lines up to have a shot at goal, Campbell clears with a flying header.

Thistle are a lively bunch. Ryden's in the thick of their attacks. Hainey gets the first shot in at goal, but it's miles high.

Dundee are weaving pretty patterns. Alan Cousin is cheered for a lovely run down the left. The visiting defence copes.

The warm sun keeps the 12,000 fans in good humour. They even appreciate a 20-yard drive from Hainey after a forward pass by Duffy. Robertson forces a corner for Dundee. He's tackled by two defenders, but presses home his attack. His shot is kicked clear by Niven.

Hainey is bang on form and he has a grand running mate in Fleming on the right wing. The winger shakes off Ryden and fires in a cross. It splits the home defence. Hainey is on the spot to meet the ball and Bert Slater has to bring off one of his best dives to save the inside man's shot.

A bad decision by Tiny Wharton. He gives a free when Murray is brought down, although Penman is through with the ball. But every cloud has a silver lining and STUART crashes the ball home from the free. His goal from just outside the penalty box is young Stuart's second counter this week. That 25th minute goal puts Dundee's dander up.

Cameron gets the ball in the net seconds later, but the whistle has gone for an infringement.

Dundee pile on the pressure and Thistle are wilting as if weed-killer had been poured over them.

Gillie romps through. His shot is saved by Niven. But Gilzean gets a second chance. Niven stops the ball with his body, but the same thing happens again before the ball goes out of play leaving Niven nursing his sore ribs.

Fleming bursts through after beating Ryden. The winger shoots as Hamilton cuts in to intercept. Slater does well to stop the head high ball.

Another dangerous move sparked off by Fleming. A cross drops in at Slater's far post. The keeper gets a hand to it, but McParland gets to the ball as Bert is about to gather it.

Fortunately for Dundee, the pass by the Partick man goes a-begging.

Niven saves from Robertson, but there's no saving the Thistle charge seconds later, in the 44th minute.

PENMAN lobs the ball into the gaping goal. Campbell attempts a scissors' kick clearance, but only makes certain it's a goal.

Reflections - A grand, entertaining game. Dundee are the masters. Partick playing attractive football, are hanging on by their fingertips. Gilzean is in sparkling form, and Andy Penman is his equal.

In the first five minutes the trainers are kept busy. First Campbell and Robertson are injured, and then Cameron is a casualty.

Robertson is quick to recover and he sends a shot skimming the post. Fleming sees Slater fall on one of his shots. Gilzean is obstructed as he tries to find a chink in the Thistle defensive armour.

Stuart gives him the chance of scoring his 50th goal. The left-half pushes the ball in front of the on rushing inside-man. Niven is relieved when the bullet-like shot hits the side netting.

Murray is showing some fine touches, an able substitute for Allan Cousin, who seems to have found his niche at right-half.

Slater has to pull out the stops to hold a Davidson header.

Penman stops a Campbell drive in the midriff, but it scarcely puts him out of his stride. He collects, runs on, and squares an inch-perfect pass across goal, and Cameron misses it by inches.

STUART puts Dundee three up in the 65th minute. He collects a square Cousin pass at 25 yards' range. He takes two steps, then hits it past Niven.

Gilzean brings a difficult ball under control. He's only yards out, but toes the ball past the post.BIt's all Dundee now as a Gilzean header lodges on the top of the net.

A little needle is beginning to creep in. Gilzean has a wrestling match with a defender and then the referee has words with Hamilton and McParland.

GILZEAN is almost killing himself trying to get that goal. But just when it looks as if his luck is out, it comes his way in the 70th minute.

It's a classic. He collects a long down-the-middle pass. Out on his own, he jinks round Niven and and puts thenball into the empty net. The crowd goes mad with joy as the Dundee players rush to congratulate Gillie the goal is his 50th of the season.

Partick get a consolation goal ten minutes from the appropriately, HAINEY is the scorer from Fleming cross.

Dundee relaxed too soon, and Thistle rattled in a second goal in the 85th minute. This time DUFFY was the scorer.

Just on the final whistle GILZEAN sets the seal on a great display when he barges through a ruck of players in the Jags' goal to tap home a Robertson free kick.

Niven has one hand on the ball when Allan gets his foot to it. 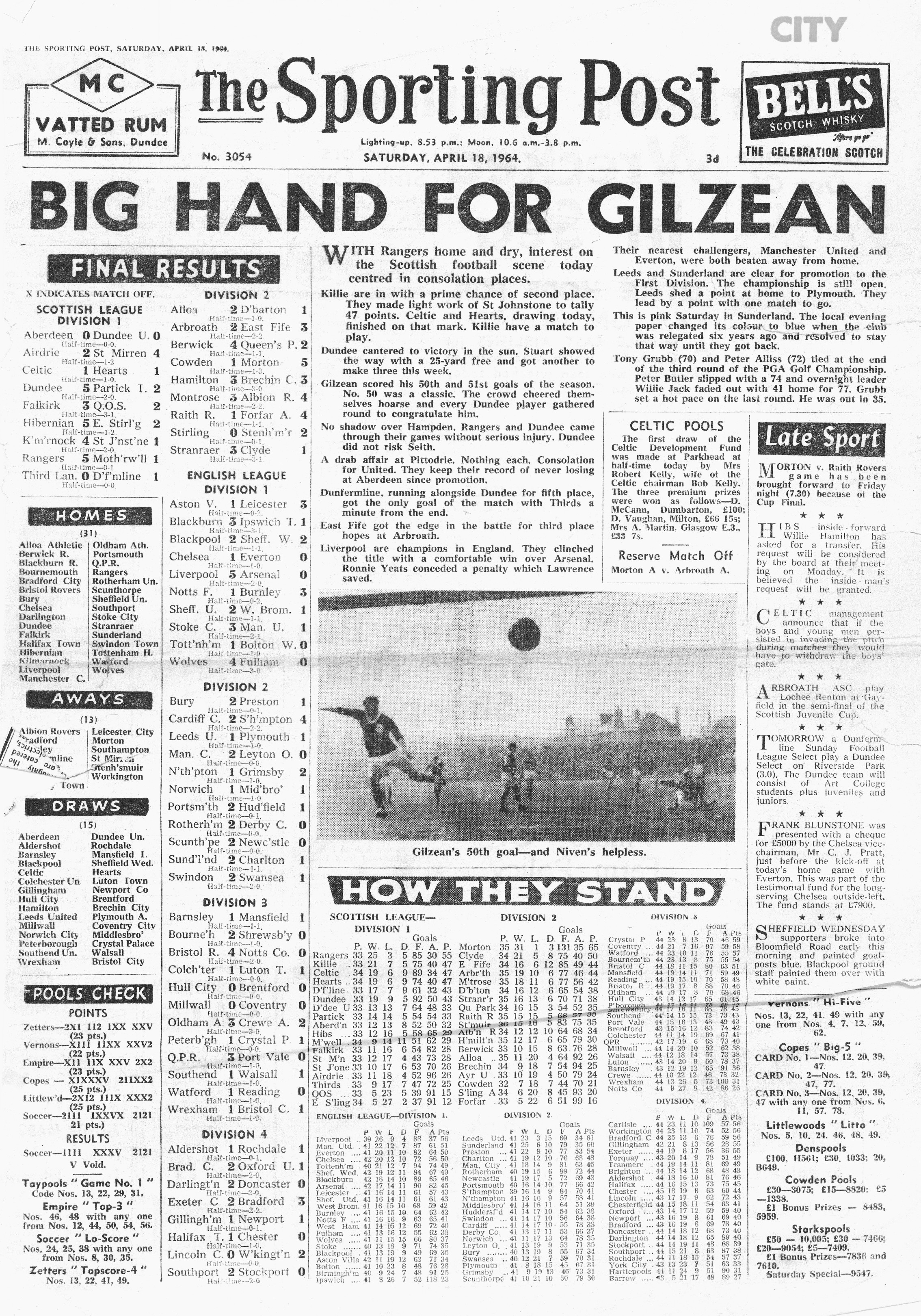