He isn't rotund, one-footed, or sleek of hair In fact, there just isn't any resemblance. Nevertheless, lanky Alan Gilzean is to Dundee what podgy Ferenc Puskas is to Real Madrid their chance-snapper supreme. Here, out of six scoring chances, he scored four goals, which isn't a bad ration in any language.

To be fair, Alan did miss a snip in the first half, tamely hitting the ball against Simpson from close in. As far as the other one that got away, blame a brilliant Simpson save between Alan's second and third goals. The big fellow showed his sportsmanship by applauding Ronnie's save, despite it delaying his hat-trick.

Of course, possibly Gilzean guessed he would score more, for by then the fast, furious Hibs of the first half had completely shot their bolt.

Yet on pressure Hibs might have been two up at the turn. But pressure alone never bulged a net, and, for all Hibs' downhill, wind-aided advantage, Slater had only one really difficult save, a brilliant flying clutch from Stevenson. So with a blank interval score sheet, it seemed the writing was on the wall for the Greens.

And so it proved. Right after the turn Cousin belted a sizzler straight at Simpson. Hibs were still fighting hereabouts, and Baker, then Quinn were spoken to after tussles with Ryden (later the pivot also got a word for a foul on Baker).

But soon the inevitable goals started coming. First a Cousin-headed pass caught Easton flat Tooted, and Gilzean fairly pounced to clatter the hall home. Then a Waddell cross nodded back by Robertson was safely slashed in by the lanky one.

Number three was best of all. Chasing a lovely Smith ball, Gilzean left Grant and Simpson helpless with a crafty diagonal flick into an empty net.

And last of all was a penalty for Easton arming a Robertson drive. Simpson brilliantly parried Gilzean's first shot, but Alan made no mistake with his follow up. Note that-four goals and not one with the famous noddle.

Joe McClelland spent 12 second-half minute inside with a leg injury, and was a limping passenger on his return. But Hibs won't use that as an excuse. They were beginning to look outclassed before Joe's mishap.

Early on, Grant, Preston, Baxter, and Baker were great Hibs, and Quinn put about a few good passes. But long before the end the Easter Road barque was well and truly sunk.

For Dundee, Alex Hamilton looked every inch a Scotland back, Seith and Stuart were grand and Gordon Smith's sheer skill kept glinting through. The hero, of course, was Gilzean, but let's not forget skipper Cox, who won the toss yet elected to play UPHILL AND AGAINST THE WIND first half.

And, boy, how that strategy paid off. This result preserves Dundee's one hundred per cent away record. Pity the Dark Blues aren't as devastating at Dens. 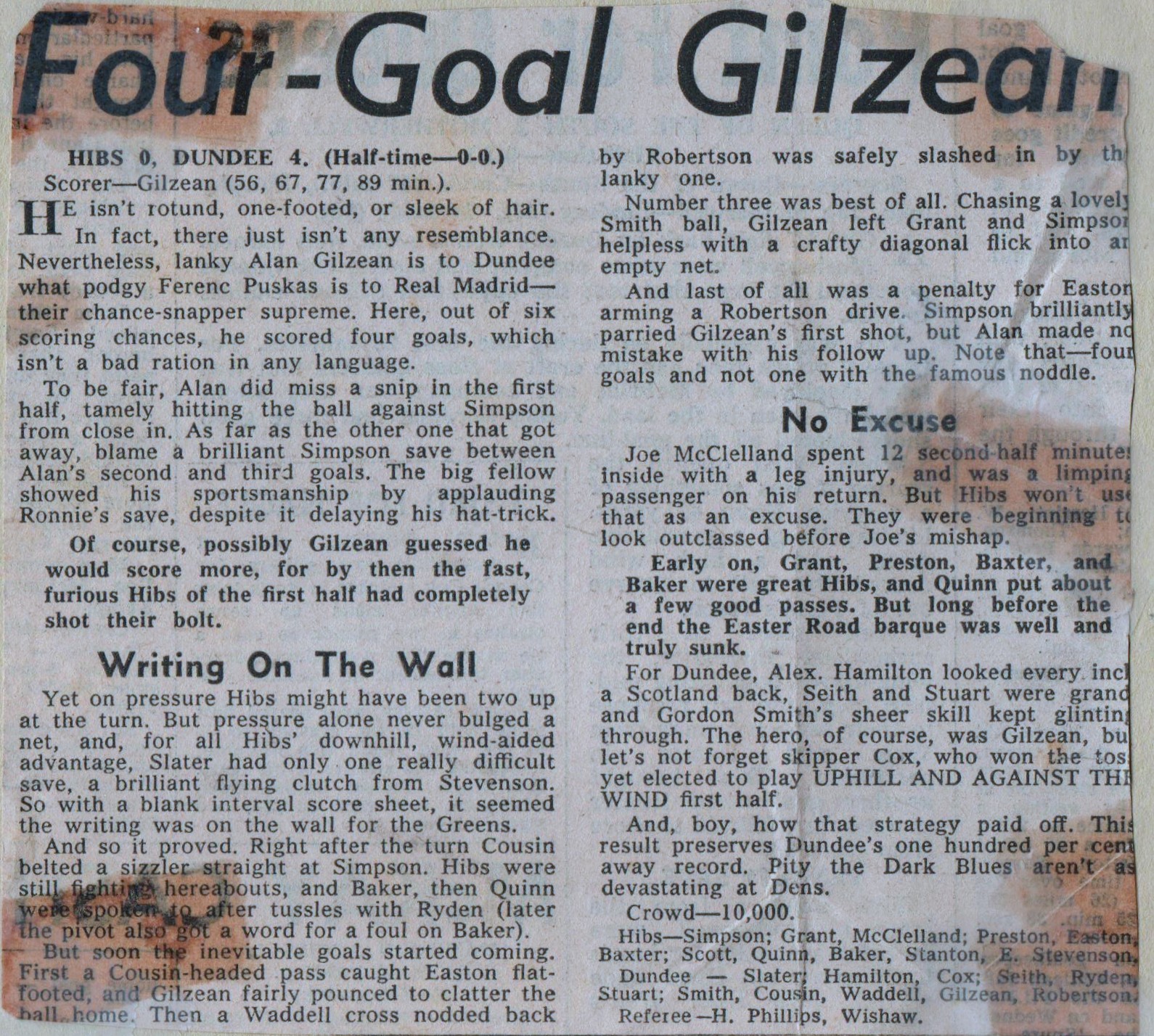