Dundee 10 Queen of the South 2 League (Division One)

Dundee's only change for the visit of Queen of the South is the resting of Seith, who is replaced by Ryden.

The Dumfries line-up is unchanged.

A thickening, rimy smog enshrouds the pitch. The lights are switched on five minutes before kick-off.

Dundee are sporting an all-white strip to avoid clashing with Queen of the South, who, apart from white stockings, have Dundee's more familiar colours for the day, Players on the far side of the field from the stand appear as ghostly figures.

The game opens sensationally with Dundee jumping into the lead in the first minute.

Wishart lobs one down the middle. Irving gets a boot to it, but can't stop it, and the ball drops at GILZEÁN'S feet. Alan runs through on his own to hammer home past the helpless Farm. The cheering hasn't had time to die down before Queens are back on level terms.

For an apparent in fringement by Ure, referee Crossman awards a penalty, and MURPHY converts the spot kick.

A good shot by Cousin is smartly tipped behind by Farm Dundee are doing the bulk of the attacking.

Hannigan is through on his own and seems well set to put Queens in the lead until baulked by Slater.

Dundee take the lead in 12 minutes and it's a double blow for Queens for they lose the services of 'keeper George Farm as well. Penman fires in a shot which Farm stops with his feet. Both he and GILZEAN go for the ball together, the 'keeper attempting to fall on the ball and smother it. Gilzean wins and with the ball in the back of the net the 'keeper is seen to be lying prone in the goalmouth.

He is carried behind the goal and almost immediately stretcher-bearers are signalled and marry him off covered with a blanket.

Right-back Morrison dons the yellow jersey and almost immediately brings off a smart save from Cousin, but the odds are too heavy and Dundee are three up in 20 minutes. Gordon Smith lays on a lovely cross for GILZEAN to head home his hat-trick from 15 yards.

Queens' deputy 'keeper again does well when he stops one from Penman.

A Hannigan-Frye move across the Dundee goalmouth looks dangerous, but there's no one up to finish it off. But Queens raids are few and far between.

The rout continues with another goal by GILZEAN in 28 minutes. Alan rams the ball into the roof of the net with a terrific 25-yarder.

Houston weaves his way in, to scrape the crossbar with his parting shot.

Dundee go nap in 33 minutes. PENMAN accepts a Smith dummy and smacks it well out of the 'keeper's reach from just inside the box.

Morrison is still performing valiantly in goal, despite the score, and smartly disposes of a Gilzean header. Five minutes from the interval MARTIN improves matters for Queens when he heads home Hannigan's cross.

But next minute GILZEAN adds to their torment when he batters home Dundee's sixth and his own fifth after a cross from the right has been headed on by Cousin.

Just on half-time, actually in injury time, GILZEAN makes it seven. Half-time-Dundee 7, Queen of the South 2.

Reflections. Apart from their surprise equaliser, Queens have never really been in the hunt. With the early loss of Farm, the game has developed into a massacre. With only four forwards, the visitors have never had a chance, and the league champions have made the most of the breaks.

Fog is thickening now, and the all-white Dundee are indistinct shadows as they surge into the Queen's goal area. A Ryden drive is well taken by the 'keeper. The 'keeper is again on the spot to deal with a long speculative lobby Gordon Smith.

The massacre continues with another goal by GILZEAN in 55 minutes. Out in the gloom, he kills a pass from Smith on the edge of the box, then smacks home No. 8 and his own seventh.

At times it is impossible to see the linesmen on the far side from the stand, and there is speculation as to whether the weather will rob Dundee of their biggest first league victory.

For the goal-hungry fans there is a distinct lull in the goal rush, with no change in the score sheet in the last 15 minutes! But RYDEN revives flagging enthusiasm with a goal in 72 minutes. Penman starts the move and the right-half finishes off by hammering home.

Practically from the recentre, HOUSTON brings out the double figures for the league champions.

The usual check of the half time scores is out of the question as the scoreboard location can only be guessed.

But the fans have much more to interest them nearer at hand. Gordon Smith is a casualty, but quickly recovers after on-the-spot attention. The game finishes with wraith-like figures still “haunting" the visitors' goal area.

Summing Up-The spectators who braved the raw conditions were rewarded with the biggest goal feast since the Cologne thrashing. It was a one-sided contest all the way, but even without the loss of Farm, Queen of the South looked set for a trouncing, with Dundee on the ball all the time.

Gilzean, well fed by his colleagues, came ever so close to equalling Jimmy McGrory's record. Ryden acquitted himself well in the mid line. 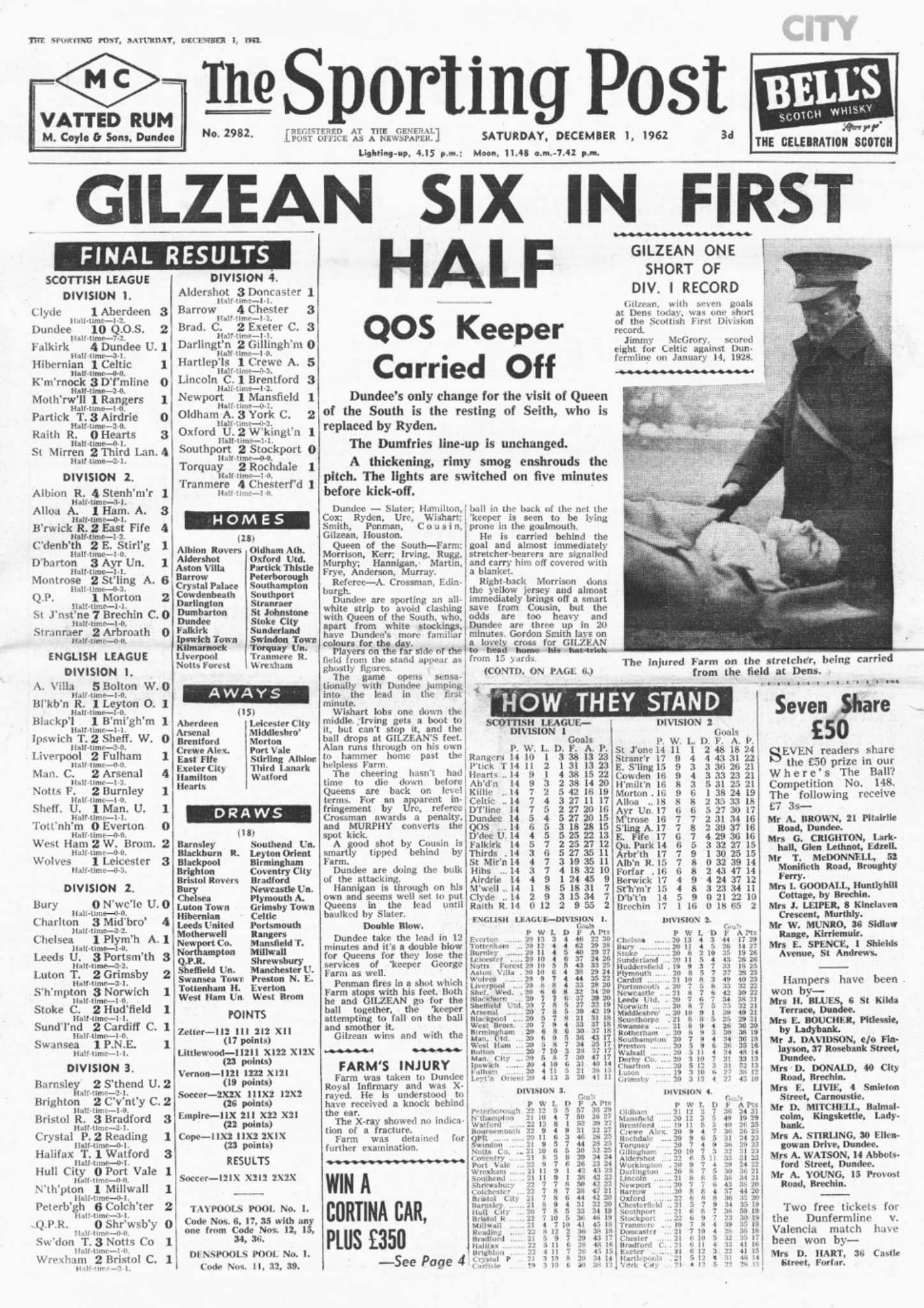