The Dundee football season opened on Wednesday, when a friendly game was played on East Dock Street Park between Harp, the ground team, and the newly formed combination, the Dundee. The Harp eleven we very different from that of last season, the only three remaining being Barrett, Fagan, and Ferguson.

The others were mostly draw from the west country, and included Mulvey, who many years ago was the star of the Harp in its brightest days. The Dundee eleven was opposed of the former members of Our Boys and East End, the only exception being M'Kie the goalkeeper, who hails from Montrose.

The match was witnessed by about 3000 spectators The ground has recently been rolled and otherwise improved, was in excellent condition for play. Harp kicked off southward.

The ball had scarcely been set in motion when Harp were awarded a free kick near the centre.

The greens failed to make much of the advantage, and then clever tactics by the Dundee forwards enabled them to reach the north end. After the ball had been once run over the line Thomson sent a good shot to Barrett, who bungled, with the result that Dundee had a corner. The leather bobbed dangerously round the north goal, and once Thomson hit the crossbar.

On another occasion Dundee sent in a low shot, and Craik tipped the ball past Barrett. As Craik was offside, however, no point was allowed. Dundee continued to show superior attack, and at length, after ten minutes play, a desperate scrimmage on the goal line resulted in Dundee gaining their first point.

After this Harp played better, and had several good rushes southwards, but these, thanks to Brown and Ferrier, yielded no result.

Dundee had another spell at the aggressive work, and gave Barrett abundance of opportunity for displaying his powers. Play gradually made its way to the south, the Harp playing with great vigour. A long shot was sent in to McKie. He made an attempt to fist out, but merely touched the ball on the side, with the result that it fell in front of goal, and within a few seconds the Harp rushed it through.

Almost immediately they added a second point, amid the enthusiasm of their support. The game was evenly contested for a time, the runs each way being equally divided. Gilligan and Craik on the Dundee left worked well together, and made some capital runs.

A particularly smart piece of work resulted in a second goal for Dundee. The two ran the ball down the left, and after carefully dodging the opposing half-backs and backs, they sent the leather skimming across the goalmouth to Thomson, who promptly sent it through.

Harp were not long in responding, and within three minutes they had again assumed the lead by adding a third goal to their credit. The excitement of this event over, play again settled down to its former condition - evenly divided.

If anything Dundee had most of the aggressive work ; but thus was more than counteracted by the splendid goalkeeping of Barrett. Half- time arrived with the score :-Harp. 3; Dundee, 2.

The second half opened with a fruitless attack on each goal. Then, after a few minutes' open fighting, Thompson secure the ball at the extreme corner, and passes swiftly acrose the goalmouth. A scrimmage ensuree, and after a second or two, the ball was forced through.

From this point until the close both teams struggled to gain the deciding point. Dundee had the best of the play, but as in the first half, Barrett was a strong wall of defence. In his efforts he was ably supported by Fagan and Gilmartin.

More than once it seemed in the growing darkness as if the ball had gone through, and triumphant shout were raised by the Dundonians. The Dundee forwards stormed vigorously, but fruitlessly.

However, thr game was by no means one-sided, Harp having numerous runs to the north wnd. The whistle sounded with the score :--Dundee, 3; Harp 3. Mr W. Hendry was referee 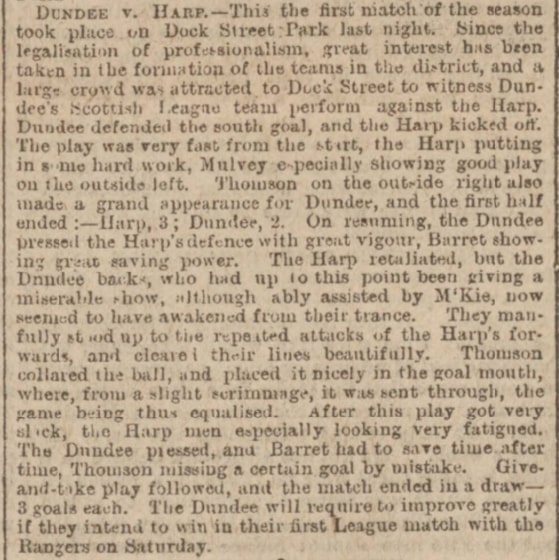 
Notice: Trying to access array offset on value of type null in /home/customer/www/deearchive.co.uk/public_html/matchdetails.php on line 3324